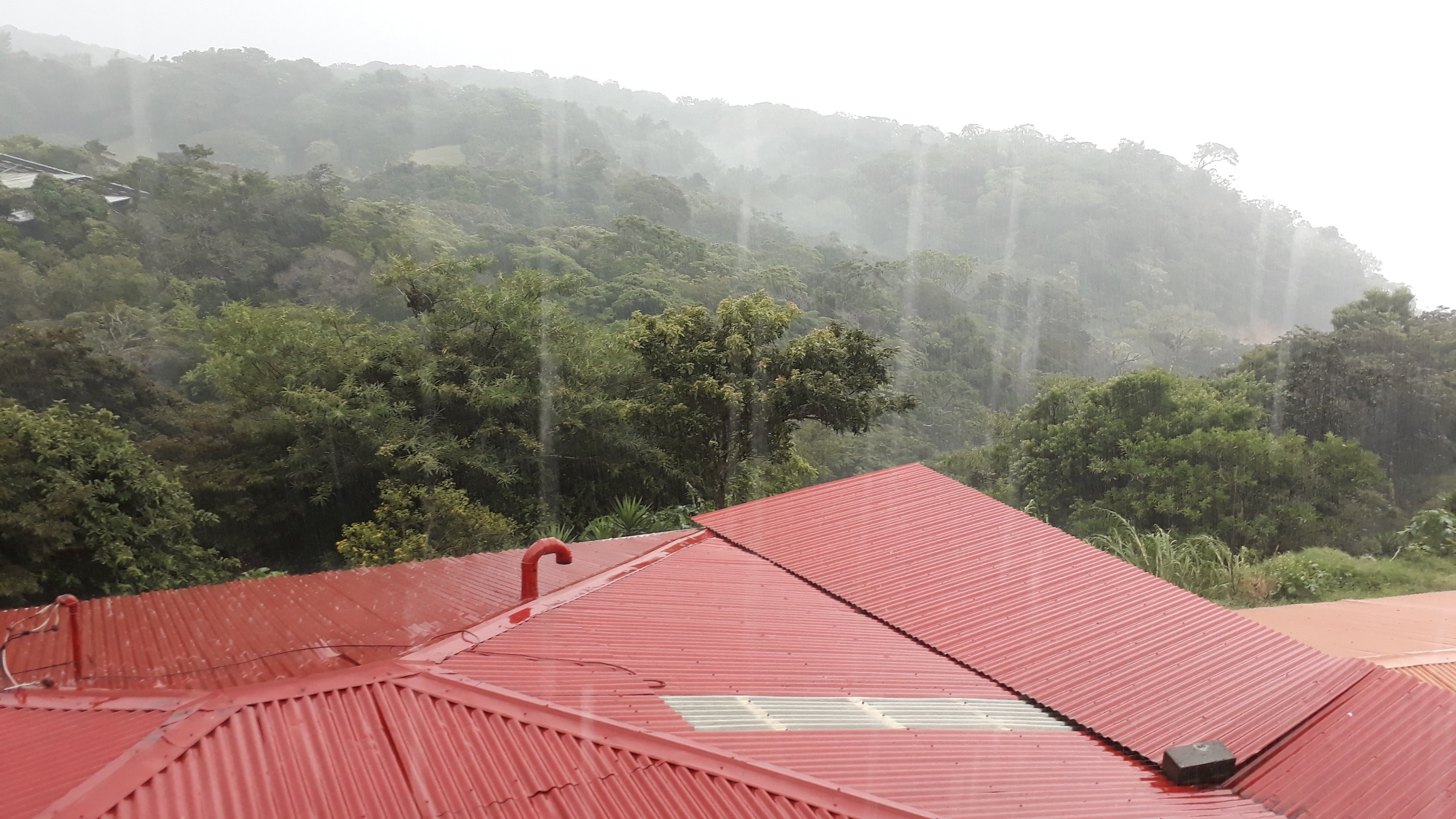 Our second morning in Tamarindo saw us getting up ridiculously early (though, spoilers, earlier mornings were quickly to come). The lady at the desk had shown us a timetable which suggested that there was a direct local bus from Tamarindo to Barranca, to change and go up to Monteverde, at seven am. It would cost around 6000 colones (~11USD) and take 7.5 hours (in Costa Rican time). The only other option was an actually direct shuttle, which would still take 5.45 hours and cost 44USD. What even is that.

So, here we were, waiting for the local bus. It didn’t seem to be arriving, and given we were at a terminal stop, this was somewhat alarming. At around ten or a quarter past 7, a bus pulled up, and so I jumped on and asked if they stopped at Barranca. The guy said no. I then asked if there even was a direct bus to Barranca from Tamarindo, and he said no—but he could take us to Santa Cruz, and we would be able to catch another bus from there. Good enough.

An hour later, we were at Santa Cruz, and we were lucky to have a bus headed for San Jose right next to us, which would be stopping at Barranca. After some confusion and quite a bit of changing-of-seats, we found ourselves at the back, in front of a very friendly Costa Rican guy (Tico) who lives in Tamarindo. He and I had a good old chat, and he told us a bit about the country—how Tamarindo had changed, partly because of the massive influx of refugees from other states: Venezuela, Argentina, Colombia. He described the local situation as being somewhat like the crisis of Syrian refugees in a way: people from those countries are flying to Ecuador, and walking the whole way north to the US. That is a long freaking way—and moreover, Nicaragua has closed its borders. Between it currently being the low season, and the number of desperate people, apparently some of the hassle-iness can be explained. He said that Ticos are quickly becoming a minority, and also that he’s worried that the country is becoming more materialistic, which is in turn changing its nature. Either way, he suggested some places for us to visit, and told us to get off the bus early—at somewhere whose name reminded me of sardines—and make our way up to Monteverde from there.

We did just that, and started spreading out our wet washing to dry while we waited…then I went, wait, why are we doing this?, stuck out my thumb, and three seconds later we had a ride.

The couple who picked us up were a lovely pair from San Jose, and the guy had all kinds of useful suggestions of places we could go, which wouldn’t be as ‘tourist enclave’ as Tamarindo, for example. In fact, he stopped in the middle of the road on the way up the mountain to draw on our map for us, so that will be our agenda for the next few days.

With the absolute refusal to accept petrol money, they dropped us off at the door to our hostel (Mountain View), where we had managed to score a private room for USD$12. I was pretty keen on the idea, as after the long flights and a couple of days of bad mattresses, I needed a lying-on-the-floor night: and that would look completely insane in a dorm room. As a bonus, we had our own bathroom, and a full-width window which overlooked the jungle. Also, we had managed to arrive in just 4 hours, rather than 7.5, and for only 3000 colones (~USD5.5). Costa Rican time worked in our favour!

The hostel’s apparent proprietor was a 17yo Costa Rican guy from the Caribbean coast, who spoke with a slow susurrus and who was named after Boris Yeltsin. Needless to say, I did a bit of a double-take at that. I don’t exactly understand how he look Costa Rican but have Russian parents, but whatever—he wants to do a language exchange to recover his Russian, so I’m putting him in contact with some of my former Russian students who are now learning Spanish. He was super nice to us during our stay, letting us do things for free etc, and helping me with my Spanish, so that definitely deserves some good karma.

Our time in Monteverde—or, more accurately, Santa Elena town—was action-packed. Since we’d arrived so much earlier than anticipated, and hadn’t lost a day to travel, we were able to get straight amongst it that afternoon, and we immediately booked a shuttle up to Santa Elena Reserve. I’d read that we didn’t need a guide for this national park, though we still had to pay through the nose for entry, and we had two or so hours to explore before the last shuttle bus back down for the day.

We did a first trail, ‘Encantado’, which was supposed to take 2.5 hours—but took us around 35 minutes. So we took a look at the map, as we still had around an hour and ten minutes left until the shuttle. There was one trail, Caño Negro (black canyon—how foreboding and awesome is that name), which was supposed to take 4.5 hours. So we quartered it, and figured we just about had time.

I infinitely preferred Cãno Negro. Rather than having a proper path as per Encantado, Caño Negro was a hiking trail. As we walked, there were the sounds of a million types of birds, cicadas, some kind of chattering animal, and frequent approaching thunder. It became cloudier as we walked—being a cloud forest—and started to get much, much darker. Suddenly the skies broke open, and it started absolutely throwing it down—it was fantastic!! I didn’t have a rain jacket, because my normal one was no longer water-proof, which kind of defies the purpose. So instead I had a slightly broken umbrella, which I used to protect my bag—the rest of me became very soggy indeed. I loved it! It was so loud and encompassing. What beats tropical rain?

Significantly damper, we made it back to the entrance at three minutes to four—just enough time for Anouk to buy some postcards, then charge onto the bus.

That evening we pretty much made it back to the hostel, ordered dinner, failed at eating most of the dinner due to exhaustion, and crashed—we were to have a 5:30am start the next day.

Anouk hangs up our washing in the bus–we’re classy ladies.

This is a plant.

This is also a plant (mostly). Turns out they have multiple uses.