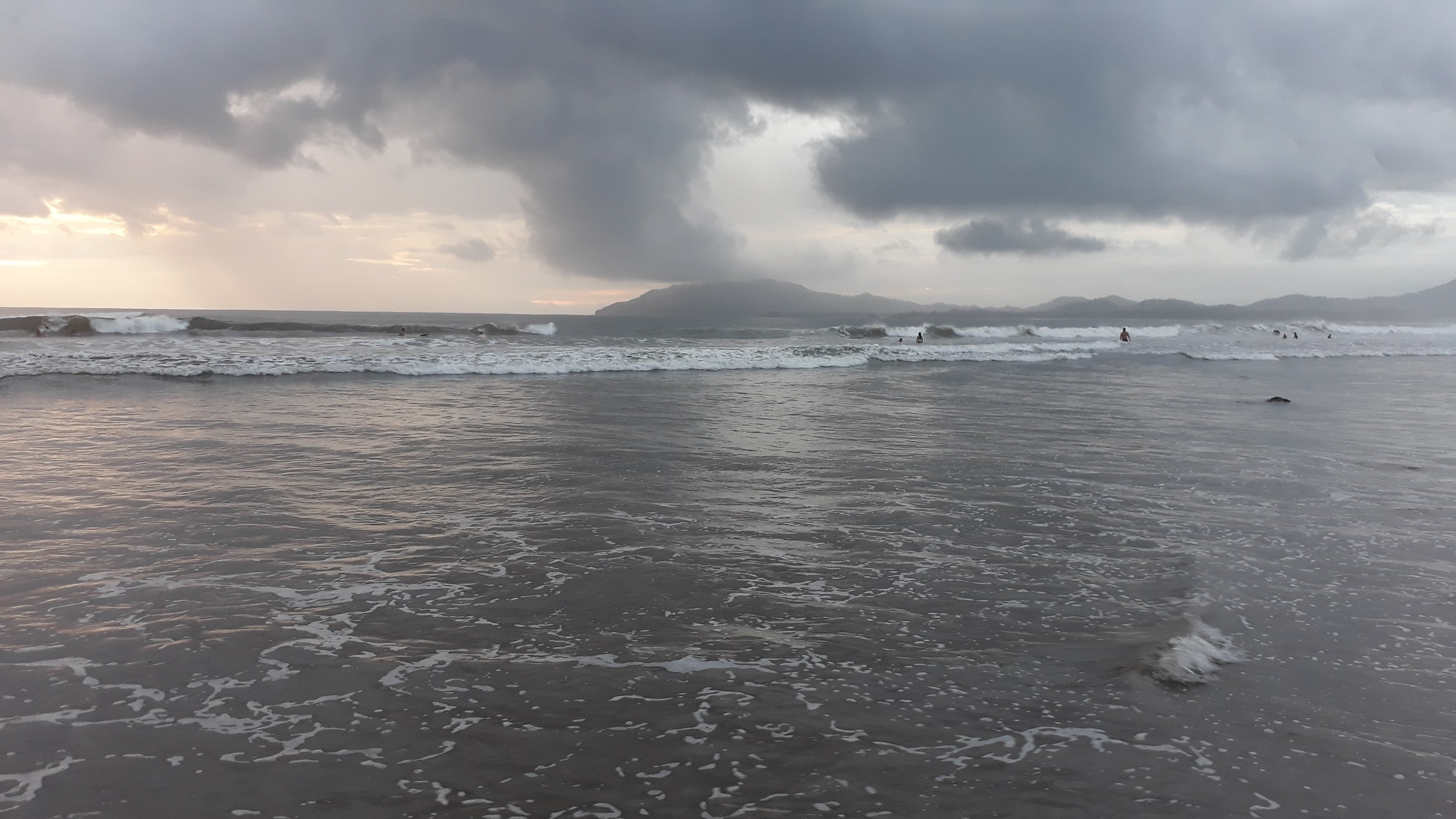 After another night at Hostel Dodero in Liberia, it was time to get our butts into gear. We decided to start the day off by heading to Llanos del Cortes, around 20 minutes by public bus east of the city (with the word ‘city’ used reasonably loosely). After being dropped more or less in the middle of nowhere, we traipsed into a park, following a rocky then muddy path, and found ourselves at a beautiful waterfall surrounded by rainforest. The water was absolutely divine, and what’s more, you could climb out just near the base of the waterfall and go behind it. I love going behind waterfalls, it makes me feel like i’m in an Enid Blighton ‘adventure’ novel. No pirates or dead smugglers on this occasion, however. Prior to leaving the hostel, the manager had asked whether we’d taken a photo of the map to the ‘hidden’ waterfall in the park, which on reflection, wasn’t that hidden—but we’d not have found it. Basically we crossed a stream and went around the western side of the main fall, shortly finding ourselves at a secluded pool full of fish, and avowedly with a bat cave nearby. It was tranquil; divine. We then continued the trail around and over the top of the waterfall, for some not entirely bad views.

Anouk checks out the hidden waterfall.

Map to the ‘hidden’ waterfall.

We next headed back to Liberia, because it was time to get our butts on the road. I had a brief nap on a hammock (okay, so getting-our-butts-on-the-road was fairly lax), then we went to catch the bus for our next destination: Tamarindo, on the Pacific Coast. My friend Guillermo had recommended it and the beaches near it, and the ocean is always a win–though it’s a bit funny to be looking back across the Pacific.

The bus ride itself was supposed to take 1.5 hours, so let’s call it 1.5 hours of Costa Rican time. It was hot, sweaty, absolutely packed, and we spent the first half an hour in a traffic jam (Liberia’s population is only something like 60k according to the taxi driver from the first night, but with the festival, there were lots of horses being ridden around the streets). In total, it took ~3 hours to reach the coast–so more like 1.5 units of Costa Rican time, rather than 1.5 hours. Either way, despite the heat and grossness, I quite enjoyed the trip–I kept half nodding off, but then every time I opened my eyes again, I’d see something awesome: beautiful vistas, hills, stunning skies, and a freaking monkey walking along a tree. Yay for monkeys!!!

Arriving in Tamarindo, we walked to our (super) hostel Blue Trailz, just by the beach. It had friendly staff, air con, and hot water in the showers (which the Dutchie is particularly keen on…!). On the way, there was a lot of hassling. I think my favourite hassle-age in Tamarindo was a guy who goes, “verrrrrrrrrrrrrrrr-rrrrrr-rrrrrrrrrrrrrr-yyyyyyyyy beautiful,” then poking himself aggressively in the chest and stressing, “BOYFRIEND!”. Then again, there was another time that some guys were going past in their car, say “hola ladies, how are you?”. Anouk replied with “great, thanks,” while I went for “eat a dick”. I guess people handle things differently. Having people hit on your (and/or offer a taxi) every few metres down the length of the street is somewhat annoying, at times…

The following morning, we went on an estuary tour, which was fine. Overpriced tbh. We saw some herons, some mangroves (but I mean, i’ve done mangroves, in NZ, Darwin, Brunei…), some tiny crocodiles (by Australian standards), some sleepy howler monkeys, and termites. All the same, it was nice to be on the water, at least. By this point the Dutchie had a headache, so we went to get her curative sushi before heading to the beach for a quick dip. That night we went out for dinner (it was my bday), and I was crashing sooooooooooooooooooo haaaaaaaaard. Given it was ladies’ night at a couple of the bars, we forced ourselves to at least go out for one drink, incidentally ending up at a bar where we were literally the only girls. Then again, it is a surf town, and at least we had a swing by the beach.

Overall, I wouldn’t recommend Tamarindo. It’s a bit of an American enclave, with the predators that match that, the prices that match that, and not that much to do affordably. If you had a car so could visit the nearby beaches, or if you’re a keen surfer, then maybe. Or, I guess, if you want to go party to Western music with in a veritable cock-fest of American guys. But pass.

On that note, when we were asking the lady in the hostel for help with directions, she looks at us and goes, “oh you two look like you want to meet people, I mean maybe,”—seems she’d mistaken us for trashpackers. Once we assured her that we were more on the anti-gross trashiness and pro-nature as it’s probably possible to be, there was a bit of backtracking!

Our Tamarindo adventure was done, and the next day we would be heading west to Monteverde.

Anouk on our ‘lazy’ beach swing. Which she says she did not steal.

Cruising down amongst the mangroves.