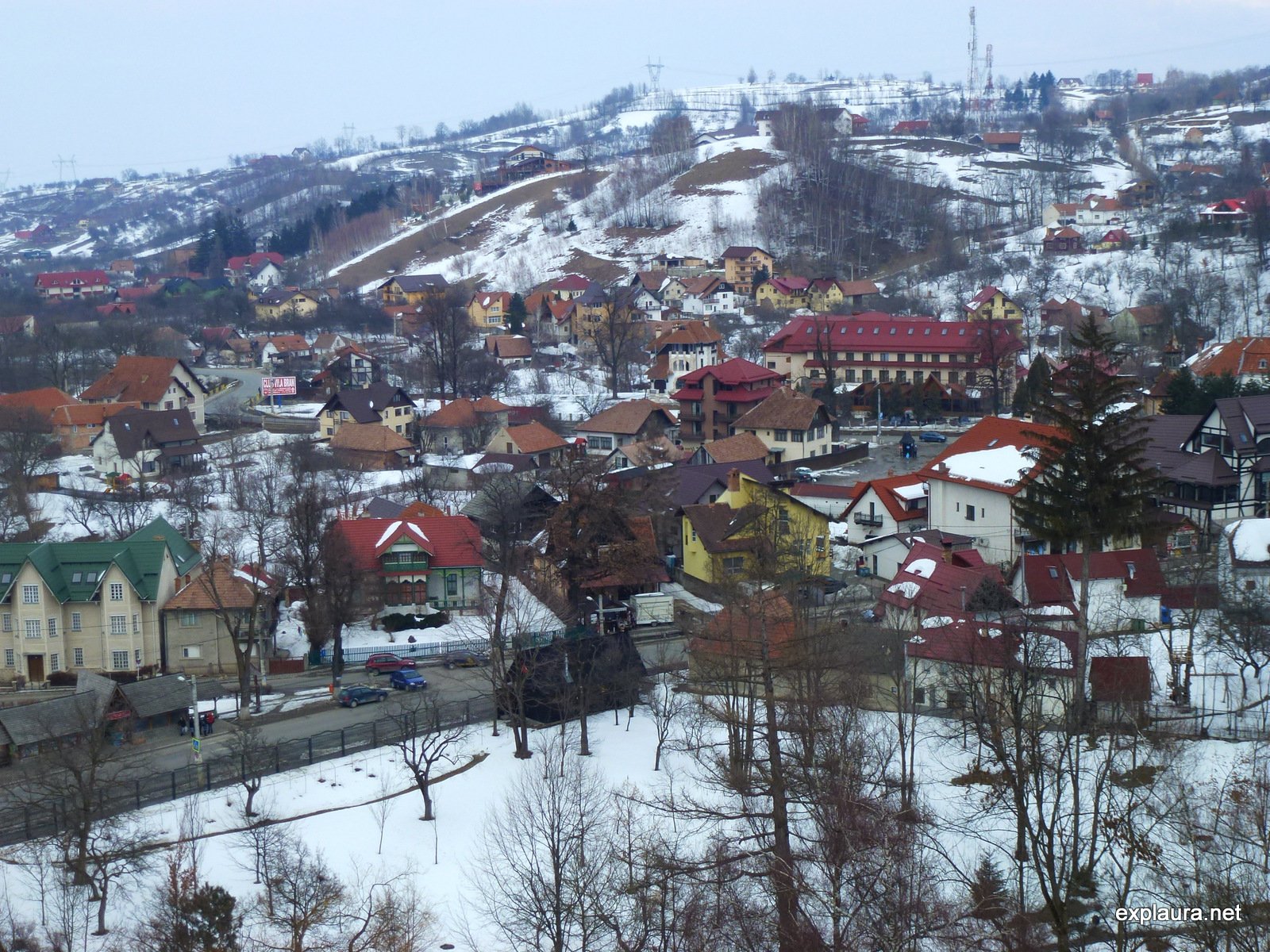 After jumping on an impromptu train in Vienna, I found myself emerging bleary-eyed from București train station early the next morning.  The border crossing had gone as smoothly as ever (ie I ended up with the completely wrong dates stamped into my passport), but otherwise the train journey was fine.  Of course, once I got to the station, I had no idea where to go next.  I was clearly broad-casting ‘lost tourist’, and so a helpful Romanian man pointed me toward the information office.  It was a small room tucked to one side of the train station, and nobody spoke English.  Nor Russian.  Nor even French.  That didn’t stop them from asking where I was from though, and me from conveying ‘Australia’.  At which point one man lit up and asked ‘surfing?’, then proceeding to mime surfing all around the room.

We managed to find me a hostel, they gave me a map and some directions, and off I went.  Walking out of the station though, I had quite a shock.  It was a freaking mess.  International train stations in the area do normally have a lot of homeless people and pan-handlers of course, but after Vienna I wasn’t quite prepared for it.  There were taxi drivers and beggars swooping down upon me, because I really, really stood out.  As soon as I could, I ducked into an alleyway to dirty my suitcase and change my clothes to look less like a rich Westerner.  (‘Rich’ being a strictly comparative term!)  Then I ventured into the street once more to try and find my way to the hostel.

Walking, I was wracking my brain: had Bucharest been recently bombed?  I couldn’t understand how else the buildings and everything would look as they did.  The main road was a giant hole, for goodness’ sakes, with no real works apparent.  There were the remnants of smoky fires, and I saw dead stray dogs on the road for the first time since I was in Egypt in late 2008.  So yes, a smidge different to Austria.

After a lot, and I mean a lot, of wrong directions, I found myself outside a slightly foreboding-looking fence.  I gathered myself, pressed the buzzer, and hey presto: it was indeed the hostel.  I was greeted by a lovely middle-aged Romanian woman named ~Milly (which I now find super-adorable, as it means sweet/cute in Russian).  We sat down and had a big chat.  She told me all about Romania and its economy: the average weekly wage was around 140 euro at the time, which as you can appreciate, is not a whole lot.  She also commented on my experiences trying to ask for directions: she said that now, people scurry about in their own little worlds, they’re insulated and unfriendly.  She said that she missed communism, that then, people were always friendly to one another, that they always tried to lend a hand.  She then said that sure, there were problems under the communist regime, but there are problems now as well: “under the Communists, we had lots of money and nothing to buy; now we can buy lots of things, but have no money”.

Post-tea, I dropped my things in the hostel room (which I was sharing with predominantly Romanian manual workers), and went for a bit of an explore.  I was quite nibbly, and on impulse went into a Turkish restaurant I found on what looked to me like a dodgy back-street, but was pretty much the centre of town.  I was quickly ushered upstairs, where the waiter brought me a seriously large meal, and then hung around for a chat.  So I talked to him and another Romanian guy, ‘Harry’ (least Romanian name?) for an hour or so.  As it turns out, Harry is also a sailor, and he spent some time in Australia working as a sailor.  What on earth are the odds that I’d meet someone else who’d sailed Australia in a Turkish restaurant in the Romanian capital?!  These two guys were quite young, and they had a substantially different take on communism.  They were quite angry–they said that it’s communism’s fault that their economy is screwed, that they’re so undeveloped and so far behind the rest of Europe: and Romanians really do see themselves as European.

I also learned why the city looked like it did.  It was pretty normal under Communist regimes for old buildings to be torn down and replaced with uniform apartments and buildings, and most of old Bucharest was knocked down.  The most beautiful buildings that remain are actually the classical marble monstrosities which house the parliament (presidency?) and so on: and apparently, it was the construction of these buildings that really drove the country deep into debt, helping to arouse the peoples’ anger against Ceausescu.  The end of communism in Romania was a bloody one, with shootings in the main street of Bucharest.  (All mistakes are my own–I haven’t fact-checked, and am writing from memory).

The next day, I announced to the new front desk lady that I wanted to go and see a castle.  She recommended Bran Castle, in Brașov, as a popular choice: after all, it’s the castle of Vlad the Impaler, origin of the Dracula myth.  Sold and sold.  I went back to the train station and caught a train out to Brașov, which as it turns out, was right back near the border of the country.  Some Romanian man came to talk to me during the trip despite my frostiest demeanour, saying that the people who look cold outside are always the warmest inside (!).  He asked me if I was scared to be a girl travelling by herself, and when I said no, he shook his head to himself.  He said that I must be very good at martial arts then, though probably a spy.  He then asked if I were a spy.  This is not an uncommon question of me, but surely everyone thinking I’m a spy would make me a particularly bad one?!

Anyway, Bran Castle isn’t in Brașov itself, and I had to catch a series of buses there.  Did I have any idea how?  No.  And I definitely, definitely, don’t speak Romanian.  It’s quite a bizarre language, actually: while it belongs to the Latin language family, unlike Italian/Spanish/French, I couldn’t make heads nor tails of it.  It’s most similar to Italian, but that wasn’t enough for me to guess.  ‘Pull’ in French is tirez, tirare in Italian, and trage in Romanian.  To add to difficulties, the numbers are very Slavic, and there are quite a few Slavic import words, so my poor brain was constantly trying to switch between French and Russian, until I completely gave up and walked around with headphones on instead.  Haha actually, I described the Romanian language as the results of a ‘linguistic gang-bang’ to JFord, and wrote a highly inappropriate story about it one day when procrastinating at work.  Because that’s apparently the kind of professional I am.

I managed to gather that I needed to catch two buses to the castle, and which the first of them was.  So after everybody had boarded, I jumped on, stood in the middle of the bus, grabbed everyone’s attention, and then called out “does anyone speak English?”.  Nobody did, but somehow an old man and I managed to figure out where I needed to go, and it was all fairly smooth sailing from there.

Bran’s castle itself was quite cool, with a very quaint outlook over the countryside.  It’s very, very Romanian, and really what you’d expect of any good (non-sparkly) vampire movie.  Also, if you haven’t hit ‘play’ on the youtube video up the top (Toccata and Fugue in D Minor), you should definitely do that now and think about vampires in Romania.  Yup.

Given that it took me four hours each way to the castle and back to Bucharest, I didn’t do much else with my day.  The next would be my final in the country (once I start moving, I don’t stop!), and I spent most of it wandering around Bucharest’s dodgy back-streets taking photos.  Apparently the reason there are so many tumble-down buildings is because after the fall of communism, it was declared that buildings would be returned to their original owners.  Of course, the country had been under communism for more than forty years at this point, and the original owners had died, moved on, or had multiple children.  Who owned the property?  Legal disputes in these cases are often still ongoing, and until they’re finalised, nobody is legally allowed to live there–so the city is full of falling-down, seemingly abandoned buildings.

I failed to catch any classical music in Bucharest unfortunately, thanks to my time spent variously wandering and seeing castles, and I also failed to try any traditional Romanian food.  On my final night, before catching the overnight train down to Sofia (<3), I tried one last time to get in to a nearby traditional Romanian restaurant, only to be turned away due to lack of space.  Before going in, I’d seen the same thing presumably happening to a guy by himself, and I found him waiting for me outside.  He was an Italian traveller who was devastated when I managed to pick exactly where in the US his accent was from haha, he thought his English was so international.  Anyway, I found myself as an Australian in a French restaurant with an Italian-American man in Romania, eating Russian food (my premiere borscht experience!).  Why hello there, globalisation!

From the station road.

These guys dropped a big banner from a building during a lull in the traffic, then ran to fold it up, cigarettes still dangling from their mouths.

A demonstration in town.

What Ceausescu spent his country’s money on – grand public works.

And yet convertibles are everywhere.

Looking down toward the only remaining ‘old’ Bucharest.

I loved the expressions on their faces haha.

The main road down from the station.

Good luck getting that car out!

One of many homeless people, having a nap (or a drink) in the park.

A house behind the main road through town: many remain abandoned thanks to contentious ownership.

‘International Restaurant’ – I may not be eating here.