My fantastic hostel in Sofia recommended that I go on a day-trip out to a monastery at nearby Rila.  Actually, the guy suggesting it said that there’s a sacred cave out there, and by passing through it you’ll be cleansed of your sins.  He said that I seemed like I needed a bit of cleansing.  There may have been winking.

In the end, there were five of us heading out, necessitating two taxis.  It was myself, three French guys and one miniature German girl.  Ramona and I went in one taxi, with the three guys in the other.  Luckily, our driver spoke Russian as well as Bulgarian, which Ramona and I could each speak to some extent.  So I had a couple of hours of Russian practice each way, huzzah.

We got out to the monastery, and as it turns out, one of the French guys was some kind of ex-religious scholar, and told us all about the things we were seeing.  Which were a bit messed up, to be fair: the monastery was Orthodox (I think?  It was very different to Russian and Greek Orthodox churches), but covered with paintings which would terrify even the most devout Catholic.  Think scenes of torture and degradation.  Charming!

Once we’d had a good look around, we went for a bit of a walk up a nearby road to see if we could get a good view, while the guys threw snowballs at one another.  And then, spontaneously and with no prior discussion, we all climbed a steep hill and went for a hike in the snow.  It was well past my knee, and on Ramona it was waist-high!  Plus we were all wearing jeans and slip-on shoes.  Seriously though—great life choice, it was so much fun!  Though sadly, my jeans didn’t survive the adventure: I fell through some snow into a tree, got my foot hooked under a branch, the rest of me slid down a hill, and I ended up not only trapped but with my jeans ripped the whole way up.  When Xavier came down to assist me, he spent at least two minutes laughing at me and my arse in the snow before he could bring himself to help.

On the walk, we encountered a wild dog and her adorable cubs, an abandoned shack, and apparently a new kind of monkey: the French guys climbed up some very unsafe-looking trees to take a photo of the monastery.  Haha I think the shot from ground level was just fine!

A great view of the monastery, nestled between the mountains.

The bleak road on the way up.

Us! Me, the three French guys and the world’s tiniest German girl.

Being as we were not on anything remotely resembling a track, we had some difficulties getting back to ground level.  The others all got to jump off a high wall into a snowdrift, but because of my back I couldn’t 🙁  So instead I found somewhere to climb.

That night back in Sofia, it all got a little crazy.  We were drinking in the hostel, then I ended up with the French guys (and five more of their friends) at a nearby bar.  Wait, when I said it got a little ‘crazy’, I probably should have said ‘hazy’: memories are understandably indistinct!  I recall that at the bar, asking for rakia (the local spirit), the bartender asked me whether I wanted a ‘little’ or ‘big’ one.  Challenge accepted!  So there was lots of that.  I remember the French guy I was talking to (whose name I, again in typically good form, never bothered to ask) learned I was travelling by myself and was shocked.  He asked me whether I was scared to be in a bar with eight guys whom I didn’t know, and I asked him whether I had something to be scared of?  People were forever asking me that question on my Bloc Trip—’aren’t you scared?’—I mean, how does one respond to that?

Next it was off to some bar the guys had heard of in the student district.  I presume we caught a taxi.  We must have.  Wait, by squinting a bit I can just about remember—I think I had to give directions to the driver in Russian, because he only spoke Russian/Bulgarian, and the guys only spoke French/English/some German.  Whoa, it’s all coming back to me now.

Anyway, we got to the club and it was all a bit crazy.  The music was Western music from circa 2000 (Linkin Park, whaaaat), and it was the same price for one bottle of vodka as three.  So we had three bottles of Absolut on the table, and only two litres of juice (which I’d insisted on).  Every time I turned away to talk to someone, the French guy I’d been talking to earlier in the night would pour extra vodka into my drink (I have deadly peripheral vision), and when I turned back around I’d pour more juice in.  Didn’t think through ratios too well though did I, and sometime after completely forgetting English (I have this theory that after dealing with only French and Russian all day, then copious quantities of alcohol, my brain threw its hands up in the air and went ‘fuck this shit’), became crying drunk (probably not the French guy’s plan?!) and sent myself home.  God, the poor taxi driver: I was completely incoherent.  He gave me tissues though.  Man I’d hate to be a taxi driver.

So that was Rila-day.  Epic. 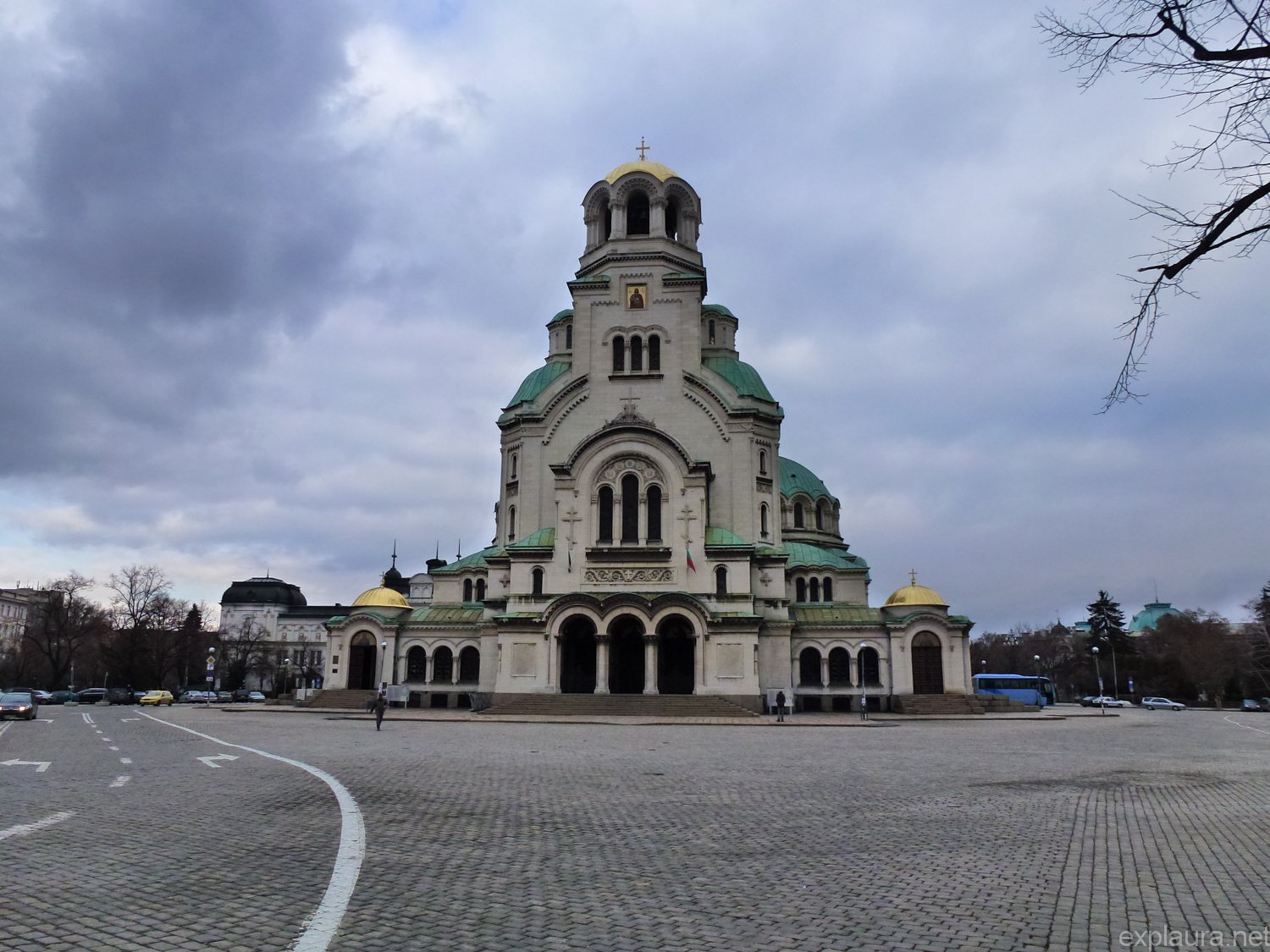 I really loved Sofia, and I’m still not entirely sure why.  There was the fact that signs were written in Cyrillic, of course, and that I had the opportunity to speak Russian with people.  Or the book market, where I spent hours poring over children’s books in Russian, and bought my copy of The Little Prince in that language (Маленький Принц).  There’s the fact that the city itself is quite majestic, or there’s the history: but I think my favourite thing of all was the water fountains.

The water fountains are actually  natural springs which have been built into a tap-and-fountain system.  The water bubbles up from below (at 28 degrees Celsius, from recollection) and is funneled out into taps in a series of fountains throughout the city.  Every day, sometimes several times a day, I’d join the locals to go and fill my water bottles.  The water was delicious, and renowned to have healing powers.  More to the point though, it’s a big part of the reason Sofia was founded where it was.  The springs, and the fact that it lay on the trade routes between Europe, the Med and the East, meant that it was a thriving trade town.  Under the city, you can still find the remnants of its past, such as this Roman road which was the main route into the city:

The whole area, including Bulgaria, Romania and former Yugoslavia, have this thing about lions.  They say that the area looks like a lion on the map, and currencies are named for it: thus in Romania, the currency is the leu, and in Bulgaria, the lev (лев)–each meaning ‘lion’.  I’ve just spent ten minutes staring at a map of Europe and I either see no lions, or far too many lions, but whatever.  Lions are cool.

I went on a free walking tour of Sofia with a very proud local man in his early 20s.  We learned about some hero of Bulgaria, who started a movement to free his country from Ottoman rule: Vasil Levski, or Vasil the Lion/the Leonine.  We saw one of many monuments to him, by the oldest Christian church in Sofia (pictures in the gallery below).  The walking tour was quite late at night and it was cold, so I don’t remember much from it.  So, here are the wikis for the history of Bulgaria and Vasil Levski.

Hm, I’m looking to make a broad generalisation (is there any other kind?) about Bulgarians.  It seems they’re not very good at picking sides, for a start: they aligned with Germany in WW2, and were part of the Soviet Union Советский Союз during the Cold War.  Come to think of it, I think that’s what the tour guide said.  He then went on to speak at some length about Bulgaria during WW2 before speaking about the country under communism.  He said that it’s a matter of vast national pride that none of Bulgaria’s Jews were executed: requests kept coming through from Hitler’s regime, but people would hide their friends and protect them in any way they could.  Actually, the place seems very religiously tolerant, and Sofia is filled with mosques, Orthodox and Catholic churches, and synagogues alike.  Plus one great big pagan statue in the main street, a goddess representing wisdom and justice.  She stands where дедушка Lenin’s statue used to.

Another matter of pride for the people of Sofia, continued our tour guide, was how much of its national heritage they managed to save from Soviet destruction.  Unlike Bucharest, buildings and monuments hundreds and close to a thousand years old still stand in some places.  A lot of archaeological ruins are also to be found beneath the city, and care is taken when building transport infrastructure to build around them.  The guide showed us the old Party Headquarter buildings, and told us how a great big red Star used to sit on top.  When the Communist Party was defeated, some locals (one man?) climbed the building and threw the star off, at which point it disappeared for years.  Something like that, anyway.  Tell you what, go on the tour yourself and get back to me 🙂

I’ve not a lot else to report from Sofia really.  There are lots of stray dogs, again, and lots of homeless-looking people: the weekly wage was even lower than that in Romania, at just 100 euro a week.  Like Romania, it gets a lot of EU assistance.

People seem to love or hate Sofia, but apart from the terrifying train station, I would definitely go back.  I really thought I might get kidnapped for a little while there, but (as you can see) it all worked out in the end.

This is a photo of the ground.

Pretty sure they’re out to kill somebody.

The ubiquitous lion, outside the courts in central Sofia.

The ancient church in the centre of Sofia.

Look closer… what kind of sandwich was that, exactly?

Another shot of the Orthodox church in Bulgaria. Russia donated the gold when Bulgaria ran out of money.

The top of the Russian church.

The mountain overlooks the city.

Inside the ancient church.