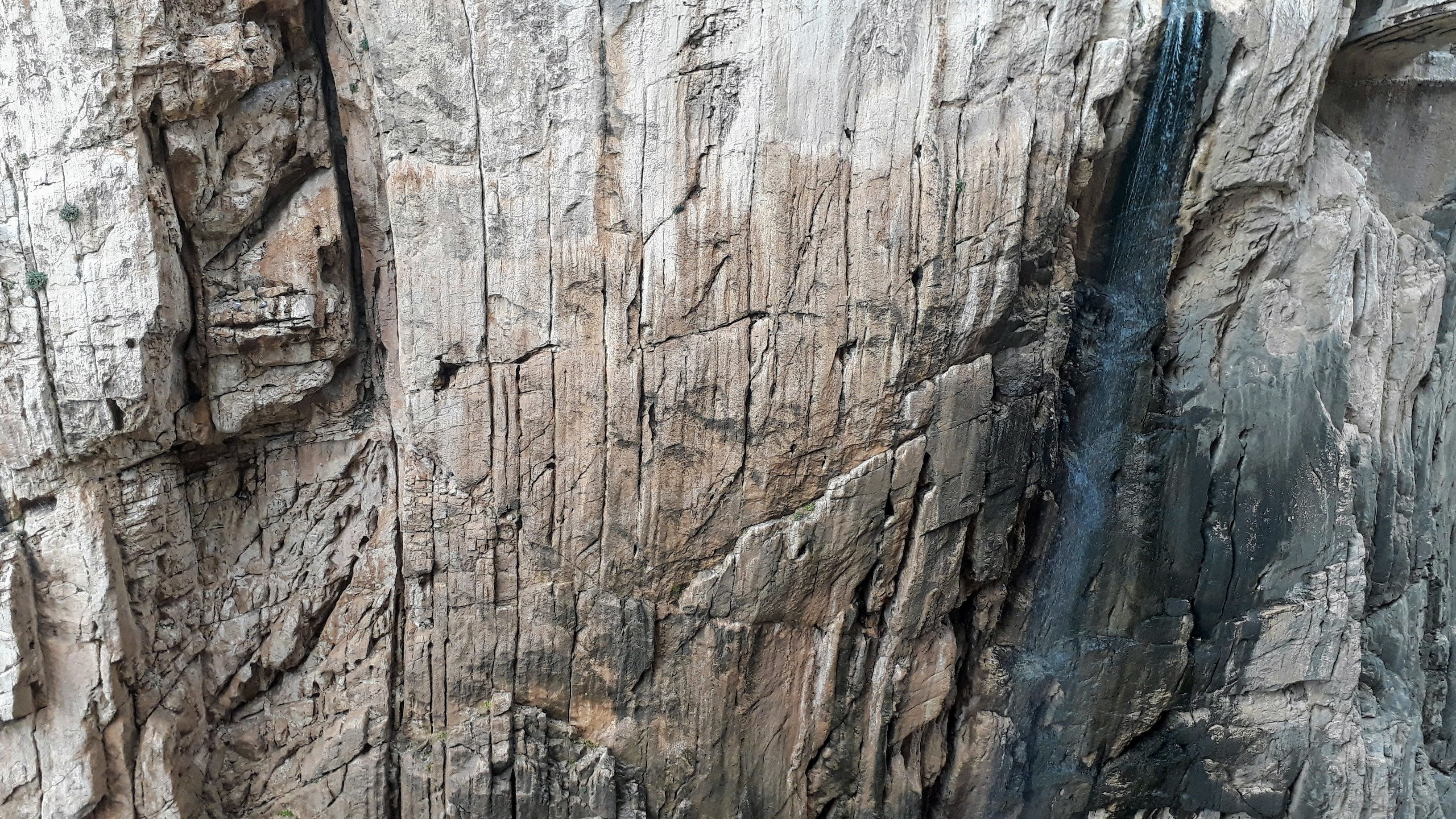 On Wednesday morning, a friend tagged me in a Facebook clip of ‘the most dangerous hiking path in the world’.  I watched it, saw it was in southern Spain, and replied, “holy fuck, I’ll go this weekend!”.  Thus began a highly impractical series of misadventures.

I was actually already supposed to be heading to Madrid on Sunday evening to begin two weeks of intensive Spanish classes, so just had to sort out flights to Málaga—the nearest airport to the path—and a way to get to Madrid by Sunday afternoon.

I need to stress again that absolutely none of this was practical.

I found a flight to Málaga from Brussels airport first thing Saturday morning, and went ahead and booked that.  Of course, from Málaga I was going to have to get to El Chorro, a town an hour’s drive away, to then gain access to the path—El Caminito del Rey.  The minor issue being that I was arriving into Málaga shortly after the only train in the morning left.  The bus was going to take four hours—and you actually have to book your walking slot in advance, so I only had 1.5 hours to get to El Chorro.  Apparently, people normally book the walk months in advance, so that was the only time at which I would be able to enter.

First, I booked car hire.  Which would have been fine—albeit my first time driving on the right—except that my licence is non-EU.  Which means I need an International Driving Permit to drive in Spain.  And I don’t have one of those, you have to request them from the driving clubs in Australia, and their IDP services were all suspended until 9 January (even excluding the whole “international postage” and “complete lack of time in which to do so” factors).

At this point, I reconciled myself to a 90 euro taxi, because by hook or by crook, I was going to do this hike.

Thus it was that I had another 4am-ish start on Saturday morning, headed to the airport, made it to southern Spain, and checked my phone.  I saw that, now I’d arrived, the weather had turned: and the Caminito was closed for the day.  This was my one day!!!

But no.  This was unacceptable.  So I immediately booked the final remaining slot for the following day, which did unfortunately happen to be a slot with a tour, but there were no other options.  I then started trying to figure out how to get to El Chorro—there was an afternoon train—and where I could stay.  I was on the bus into Málaga proper, desperately calling accommodation options in El Chorro.

As it turns out, there is such a thing as “climbing season”, and El Chorro is surrounded by climbing canyons, so the town was absolutely booked out.  I saw that one of the hostels, the Olive Branch, normally offered tents—but even their tents were booked out.  So I did some more brainstorming, excluded the hotel in El Chorro as too expensive, and called the Olive Branch lady back.

“Forgive me, because I’m about to ask something really stupid, and you’re totally allowed to judge me,” was pretty much how I started.  “But I saw there’s a Decathlon in Málaga…if I buy a tent today, do you guys have any sleeping bags?”

She replied that they used to hire out sleeping bags, though no longer do—but as a result have a lot of old broken ones out the back, which I was more than welcome to.  She said that Decathlon would be closed for Children’s Day, in all likelihood, but I was clearly in a spot: so I could sleep on their terrace, if I’d like.

This freed me up for around four hours of wandering around Málaga before my train up to El Chorro.  It’s a picturesque little town, though it’s obvious that it’s been built up around cruise ships—and not just because there were two of the hulking beasts in the marina.  The town is very much geared towards tourism, and the major sights can be ticked off in a fairly short period of time.  Thus it was that I had a lovely adventure in the castillo overlooking the town, strolled past the Picasso museum (he was born in Málaga), checked out a Roman auditorium or two as well as some ancient baths—and, of course, had some tapas.

At last it was time to head to the train station, and I managed to get to El Chorro (I keep typing ‘el churro’, so please appreciate it every time I manage to write the correct thing…!).  It was then a 35 minute walk uphill, as it began to rain, before I made it to the Olive Branch.

I was very lucky in that they’d managed to find me a bed for the night.  While moderately less adventurous, it was going to be a heck of a lot warmer!! So I settled into the WiFi, booked a new coach from Málaga to Madrid for the next day (17:45 rather than 15:20) in case I missed the first one, and got to know my bunkmates.  It was a great bunch of people, actually, though I was the only non-rock climber.  Despite this glaring flaw, they invited me to dinner, and it turned into a late night involving a thoroughly civilised amount of wine and a regal feast.

The next day I got up early, and two of the guys drove me to the station on their way to ‘the rock’.  I then caught the busito up to the entrance to the park, más o menos, and headed on inside as day finished dawning.

The Caminito, while spectacular, was in no way dangerous.  Perhaps during the 15 years when it was closed, where it had to be completed while bolted onto various objects.  Now, however, they’ve built a very sturdy path into the walls of the canyon.  Anyone with moderate fitness and surefootedness would be able to complete it with ease.  That said, while a lot tamer than anticipated—a LOT—it was stunning.  I don’t think I’d ever seen a proper canyon before, and I couldn’t help but imagine pterodactyls, rather than vultures, swooping from the heights.  It was prehistoric—a fact attested to by the ancient shell fossils in the walls.

After a nice chat or two with some Danes, and with some Ukrainians whose teddy bear’s twitter is apparently famous, I popped out the other end none the worse for wear.  Can, yon.

Now I had to get back to Málaga to catch the 6-hour coach to Madrid.  I walked up to the hostel, grabbed my suitcase, and walked back down.  And while theoretically there was a train just after 3pm, there was never any doubt that I was obviously going to try hitch-hiking.

While there weren’t many cars exiting the town, I was lucky to have only a few go past before a van pulled over (as is custom—you’re not allowed to have a van if you don’t pick up hitch-hikers).  There were two German guys inside, and the driver said, “I don’t have a seatbelt—is that ok?”

“Sure,” I said.  “I’m adventurous!”.  And so it was that I climbed into the back of this van, took the pillow off the bench, and braced myself against the table for some fun turns on the way to Málaga airport.

At this point, I was feeling I’d definitely be able to make my original bus, and so I caught a too-expensive taxi to the coach station.  (The taxi driver, by the way, was not very convinced of the safety of hitching.) I then waited and waited, the coaches arrived, I stashed my suitcase on the correct one and boarded.

“Espera,” said the driver, beckoning me back.  He looked at my ticket.  He pointed at the date.  “This is for the first of July,” he said, “not the seventh of January”.

So I grabbed my suitcase and dashed to the Alsa desk, but it was packed.  Returning to the driver, he took me inside to the information desk, where another girl was freaking out over having exactly the same problem.  We’d both booked online, had selected the correct date from the website’s calendar, and been issued a ticket for the wrong date.  Thanks a freaking bunch, Alsa.es.

The lady behind the counter grasped our problem and got onto fixing it: the only problem being that there was just one seat left on the coach, and the other girl was at the desk first.  Soooo I had to wait until the 17:45 bus after all—and my second ticket had the exact same problem (i.e. 1/7, not 7/1).  The lady changed my first ticket, refunded my second, and I went and hid in Starbucks and had the whitest girl coffee I could find.

A few hours later, I returned to the station, and this time successfully boarded.  There was a brief panic halfway through the trip during the break, when I returned outside only to get on the wrong bus, because mine was MIA—but apparently it had just gone on a little adventure, and returned shortly.  That said, the bus took an hour longer than it should have, so it was a seven hour trip to Madrid.  Good times.

Upon arrival, it was time for yet another taxi to the hostel, where I apparently bounded in with enough energy for 2am that they immediately assumed I was Australian.  Result.

With a trip this impractical at the outset of the year, it’s boding well for 2018.