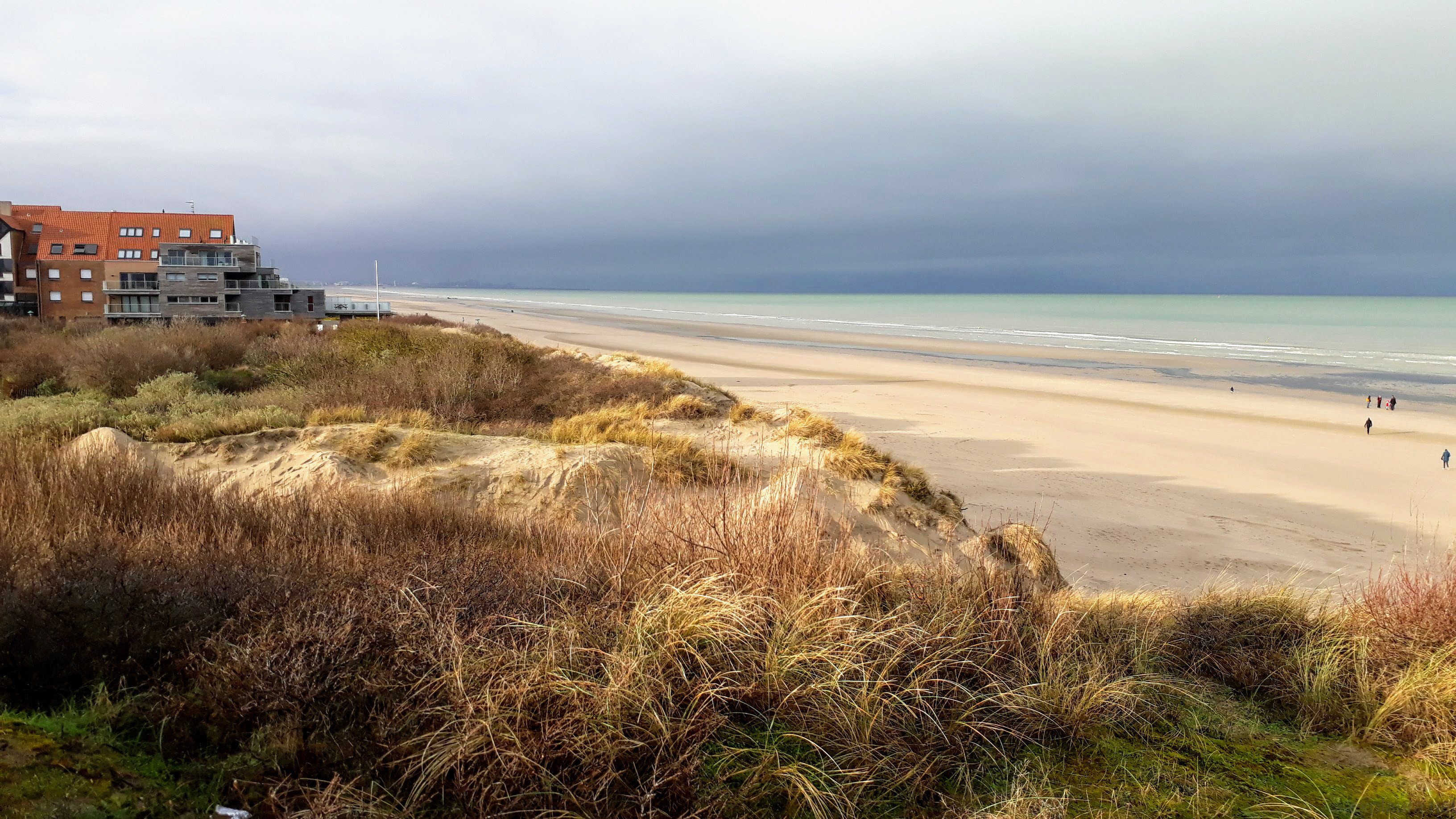 In November last year, and following my 500km Spanish hike, it occurred to me that I should now walk the entire way around Europe. With a long weekend coming up, I decided I’d knock off the Belgian coastline, from Knokke-Heist to De Panne, in a couple of days—and in this year’s xmas downtime period, the French coastline was looking more and more tempting.

Christmas itself was spent re-visiting Copenhagen, and I flew back to Brussels on the 26th.  At that point I had two choices: watch Netflix and procrastinate against schoolwork for the week, or get walking.  I asked myself what a version of myself that I actually had some degree of respect for would do—and thus I found myself up at 4am on the 27th, scrambling to pack on time to catch the first train at 5:13am.  Which, incidentally, I missed: but I did make it to Gare du Nord in time to catch the first service to De Panne.

After a quick stopover in Ghent, I switched trains, and came to in De Panne when a passing stranger shook me awake.  It was cold, it was dark, and it was rainy: an altogether ignominious start to the day.

The sun coming up just before I reached the French border

Just as I made the very plain French border, first light made its appearance, and things started to look up.  In a continuation of the landscape in West Flanders, there were dune reserves galore, and so my trail saw me walking on sand for a significant period of time before I finally saw the ocean itself in Bray-Dunes.  It was, as always, overwhelming: the ocean is my favourite thing in this world.

At Zuydcoote Beach, I stopped for an extremely confusing coffee.  I asked the woman what a “latte caldo” was, and ended up with…honey-flavoured warm milk?  A quick order of an espresso later, I had an actual coffee.  Coffee is life, dammit.

There were plentiful signs everywhere explaining the history of the area: this particular region used to be a launching-off point for fishing trips to Iceland, and there were markers of friendship to be found.  The villages and resorts in the coastal region were largely destroyed via war and occupation in the 20th century, and started to be rebuilt from 1954 onwards.  The closer I got to Dunkirk/Dunkerque, the more graphic the signs became, posing cheery wonderings such as, “We can only imagine how many dead remain buried and undiscovered”.  Being the somewhat imaginative person I am, this led to some fairly eesh-worthy images: wondering how many dead people I was walking over as I trekked across the dunes, or how much blood had been spilled in any given spot.  Horrendous.

This only got worse as I started walking the beach at Dunkirk, where old bunkers truly started to make themselves known, and shipwrecks were strewn like carcasses themselves up and down the beach.  Underfoot was some kind of hollow, crunchy seaweed, which both looked and sounded like walking on bones.  It was all a little much, though the juxtaposition with the dark-limned ocean was sublime.

Luckily, Dunkerque fed me cheesy fries, and thing started to look up.

By this time I was some 25km in, and starting to feel it: in the preceding ~4 months, I’d done just one walk, and that was 15km at most.  My hip flexors were starting to complain about all the sand walking, and I was definitely starting to get a bit tired.  But again, cheesy fries were there to save the day—and I had a long way still to go before my accommodation for the night.

Things started to get a bit more fucked at this point.  Part of the reason I’d set out from Brussels so early was the 90% chance of rain and heavy winds, and I was hoping to get the bulk of the day’s hike in before that hit.

I was not so successful.

The rain started to properly settle as I ate my fries (which were cheesy), and when I went outside, it was already windy enough that I was blown sideways.  Thus began several hours of walking into an extreme headwind, which saw me doing involuntary grapevines and drunkenly staggering up the street.  The rain was cutting, and I was pretty glad to have brought one of my snowboarding bandannas with me to protect my face.

That highway, though.  It was not designed for pedestrians.  Or cyclists.  And while I’m down with road walking, this was actually quite dangerous.  There was a path which kept swapping sides, then disappearing, then running into a goddamn hedge.  A hedge.  Whenever the path swapped sides, as there was no shoulder to the road, I’d then have to cross the six lanes to get to the other side.  #SafetyFirst.  Also, there were windfarms everywhere, with the mills going crazy—possibly a reflection of how extreme the winds in the region are.

It was starting to get dark, and I was tired, and grumpy, and driving myself on with a combination of some very angry punk and a near-constant refrain of “fuck you!” to everything that wasn’t working out for me.  It was something along the lines “Fuck you, foot!  Fuck you, weather!  Fuck you, horizontal rain!”—because naturally, all these things were doing all this to me on purpose, and my current state was in no way the fault of me or my poor decision-making skills and/or stubbornness (read: stupidity).  It reached a peak when a hedge-leading path took me into a field, from which I could see the other side of a river, and no apparent way to cross it.  Did I throw a tanty?  Yes, yes I did.  Did I have a little yell?  My word, yes.

With no other help for it, I looked at the busy overpass, climbed up a wall of fucking mud, and started to cross with the traffic.  I certainly wasn’t going another 10km out of my way to cross this river on a pedestrian bridge.

It was stupendously windy, and I was clinging to the guard-rail on the downwind side of the overpass.  At one point, a large truck went past, and the draft created saw me starting to fall over the barrier for the river below.  I’m pretty glad to have been holding on—but all I could think, in my somewhat adrenalin-fuelled state, was that “If I fall off this bridge, I am going to be so pissed (and dead)”.

Soon after crossing, an actual cycling path began, and things became a lot easier.  Granted, things were starting to get quite painful, and I was making the odd sound that would have been more at home at a sumo wrestling match than coming from the delicate flower I obviously am.  I was hitting another wave of energy, though, and so put on some Aussie hip-hop and started dancing my way down the highway: because if I’m going to do this thing, I may as well do it with swag, right?  (Right??)

I was only 300 metres from the hotel when my calves started unforgivably cramping, which was a bit of a joke.  I made it, though, walking into the lobby, seeing the clerk, and immediately announcing “I’m sorry I look so terrible!!!”.  Because I did.  I was haggard, wind-blown, soggy, and—as I later saw—had the beginnings of weird blood/bruise patches all over my legs and feet in particular.  I didn’t show that to the clerk, though.  I mean…. no.

Happily, despite it being the budgetiest accommodation I could find for the night, my room turned out to have a bath.  I poured it and jumped in, only to start uncontrollably saying “oh my god” for a good five minutes straight.  A solid room-dance, dinner, and some stretching later, it was time for bed: because the next day, I’d be heading to Calais.