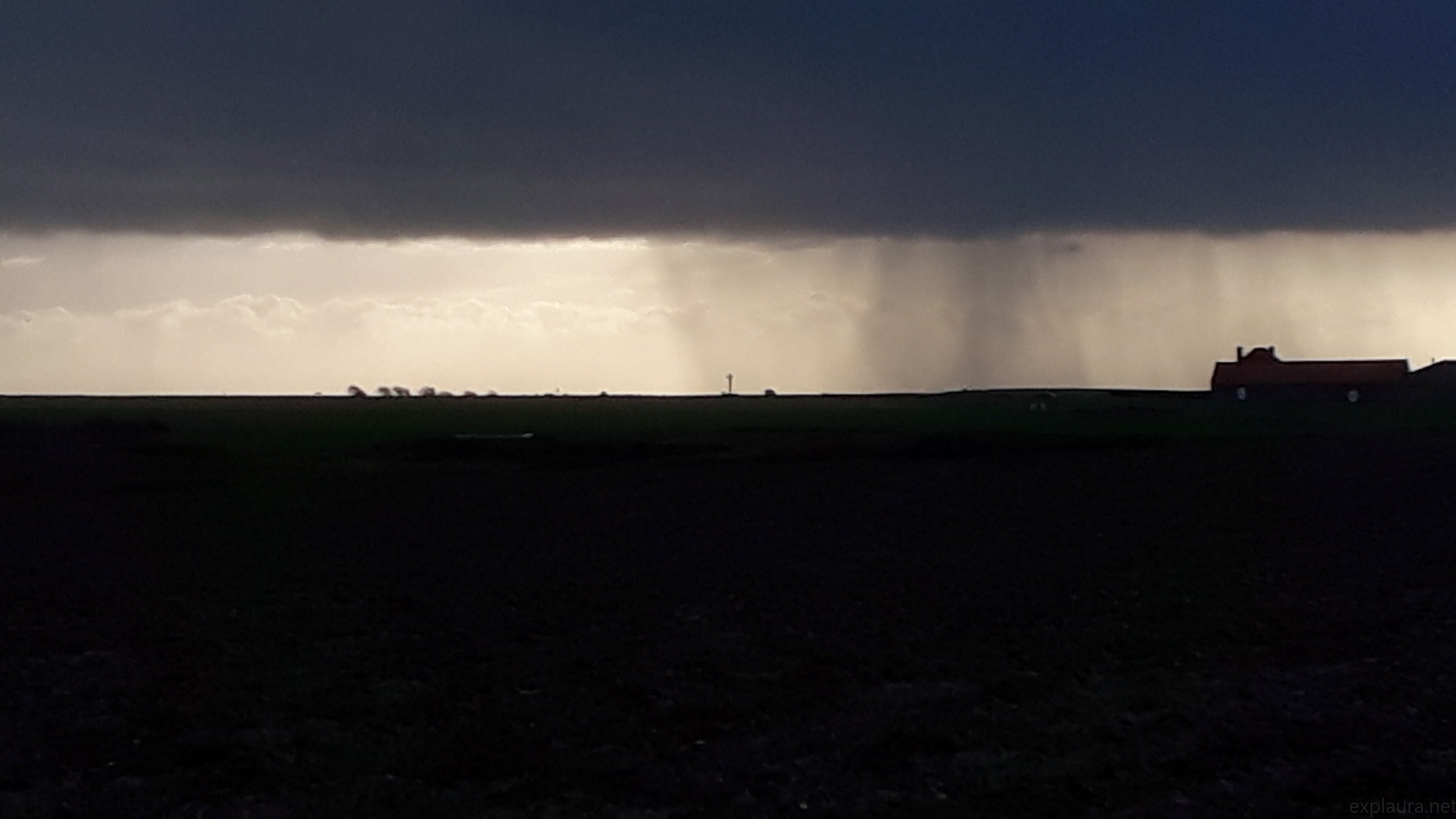 I swear Calais’ Punjabi restaurant gave me superpowers, because I woke up on day three feeling like I wasn’t going to re-commence sobbing with every other step.  My mission for the day would be reaching Audinghen, as the only village under 40km away with accommodation less than 80 euro for the night.  (I was very much missing Spain’s ever-present albergues peregrinos.)

Starting in the pre-dawn light, I struck out parallel to the beachfront, passing through a village with French, European, and Canadian flags on the way.  Speaking of decorations, people’s festive decorations were still up, and one of my quiet joys on this trip was France’s apparent obsession with murdering Santa Claus as brutally as possible.  I saw him hanging from windows, chimneys, ladders, tumbling down from terraces, swinging from letter boxes.  Santa clearly does *not* have an OH&S policy (though hopefully he does have life insurance?).

As I continued, the beach fell away, and I started to climb towards what turned out to be Cape Blanc Nez, a German outpost during WW2.  It was back to bunkers everywhere, and the wind on top of the cape itself was immense.  I was fascinated to read that they were able to hit Kent, as in in-the-UK-Kent, with 1 tonne bombardments from there.  I mean, obviously it’s bad and all, but how amazing is that??

Descending the hill, I was really hoping it was time for coffee, because honestly, half of me doing these walks is just coffee forcing my legs forward.  I walked into a cute hotel just below the cape, L’Escale, where I was able to both buy water and meet all my caffeine-based needs.  Also, I spilled water all over their floor, and they were cool about it, sooo.

I waited in the hotel until the sudden rain passed, and then headed off once more.  An hour later, it was time for lunch—at ‘Chez Nicole’, a place which had just two meal options: mussels and frites, or jambon and frites.  Needless to say, I asked for just frites, though the bowls of mussels that were coming out were seriously impressive (scary?).  One bowl for two people was about as big as my rib cage.  I don’t think they get many vegetarians in that cafe.

My path took me somewhat inland after this, as I followed ‘littoral’ routes over hills and through several more villages.  I started to meet locals out walking their dogs, including one couple with an extremely pattable sepia-toned Australian shepherd.  Finally, at the top of one hill, I reached the town of Tardinghen, from which I could see the famed white cliffs of Dover.  It’s so ridiculous to be standing in one country, and be able to see over the waters to another!  Just imagine if New Zealand was that close to Australia.  I think they’d be embarrassed enough to tow themselves away in fairly short order!

This road has a moustache.

At last I reached Audinghen, where I tried to check into and pay at my hotel.  Minor problem being that their card machine was broken, and I didn’t have enough cash.  “The nearest ATM is only 5km away, in the next village,” explained the lady.

I offered to do a bank transfer in front of them, but the lady didn’t know their bank details, as she was looking after the hotel for her friend.  She then suggested I make the same offer at the restaurant over the way, where happily there was not only a woman who spoke English, but who was effusive in her efforts to help me.  With her assistance, the hotel agreed to let me pay the following morning, when their card machine would apparently be working.

My heroic lady suggested I follow the road east out of town to Cape Gris Nez, which I was very much hoping to do.  Why have one ‘cape nose’ in a day, when you can have two?  So despite starting to feel a bit terrible, I struck out for the lighthouse on the point, which was only a couple of kilometres away.  As I headed towards it, the light was heading into golden hour, and the rain-strewn hills and fields made for stunning company.

At last, as the sun was approaching the horizon, I reached the Cape Gris Nez lighthouse and reserve.  It was, hands-down, the most amazing sunset of my life.  I went full ‘double rainbow guy’ (https://www.youtube.com/watch?v=OQSNhk5ICTI) and started crying at this sunset.  Possibly a combination of pain and endorphins helped me out, there.  Also, it bears saying again, it was utterly gorgeous.

It was time to troop back to Audinghen for some food at the helpful restaurant, before returning to the hotel.  While waiting for my food, I started reading this book about a woman in 1920s Alaska whose marriage was failing, who had lost a baby and was now trying to kill herself.  Probably a little much after an emotional sunset, tbh, not to mention the two glasses of wine.  Apparently trying not to cry very publicly in restaurants is now a thing that I do.

As it turned out, I was the only one staying in this most budgety of hotels, which was disconcerting.  There weren’t even any staff—just me, some shutters, and the looming possibility of ritualistic death.  I may have checked under the bed for bodies while doing my evening stretches…just maybe.  (Luckily, I did make it through the night, as the next day would be the final day of my trip—for now.)

Calais to Audinghen, via Capes Gris and Blanc Nez: 34.59km.