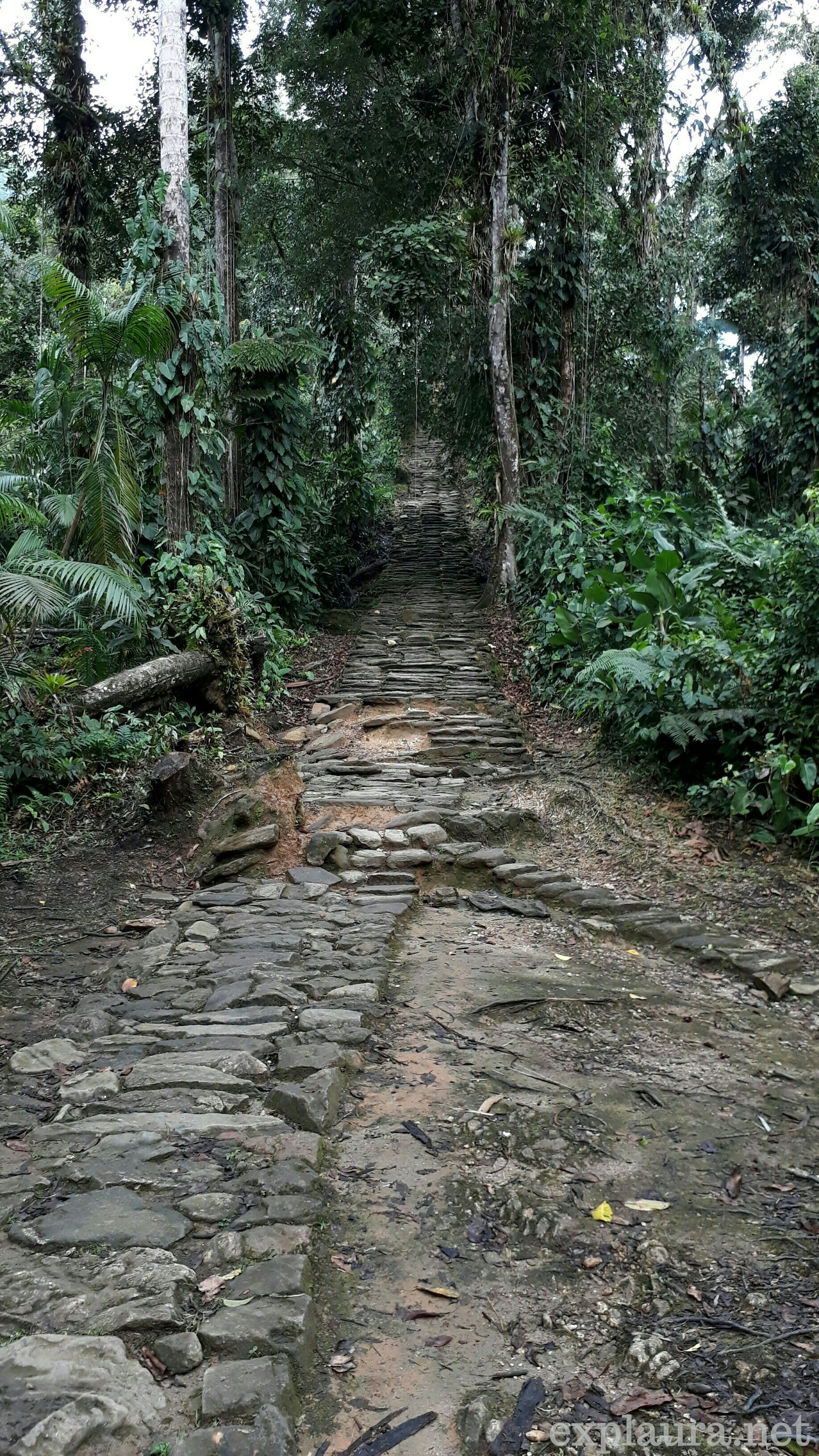 At a bright and early 4.30am, we woke up to finally head to the Lost City, which was a mere few kilometres away.  Of course, I say ‘woke up’, but in actuality the beds were so uncomfortable that my back had been in too much pain to sleep during the night, so let’s call it hyperbole.  Definitely not the most comfortable accommodation, but beggars can’t be choosers!

On that note, I’d read online that it wasn’t possible to do the Ciudad Perdida trail without a guide.  I think that the trail itself is easy enough, with not many opportunities to get lost; however, you’re not allowed to camp in the park, and without a guide, I don’t know how you’d have access to food or accommodation.  So perhaps put the idea out of your mind…

The foot of the 1200 steps up to the city started just a kilometre from where we were staying, so we reached them in short order, a bit after 6am.  And it turns out that the ancient peoples of the area took their staircases pretty seriously.  It consisted of not only many, many steps, but made of often slippery mountain stone.  They were steep, and of varied sizes–coming down later in the day saw us walking sideways to try and fit our feet and minimise falls.

Reaching the top, the first terraces of the city began to unveil themselves.  The remains were in circular shapes, as they formed the formations of ancient houses–which, like those we’d seen the day before, consisted largely of mud and palm fronds.

The city was ‘lost’ for a good 400 years, from the arrival of the Spanish, until 1976.  With the Spanish and the diseases they brought to the country, some 80% of the population were wiped out.  Initially relations were friendly, but as the Spanish conquest became more aggressive in their search for land and tradable goods, things became more antagonistic.

The city was rediscovered by looters, who found the foot of the stairs when they shot a bird and were looking for its carcass.  That’s kind of amazing, if you think about it–I mean, granted, you had loot in mind, but then the foot of this gigantic staircases appears behind some trees, and goes up, and up, and up.  Then you reach the top to discover not just a town like the other 199 discovered to date in the area, but a full city, with facades, houses, agriculture, and what our guide referred to as a ‘discotech’!

The father and son began digging into the centre of each of the houses, looking for riches–and riches they found.  They then carted them back to Santa Marta to sell, but drunk on their finds and on, you know, alcohol, they were a bit loose-lipped about the find.  This led to further groups of grave-robbers and looters trying to find the location, and fierce competition led to murders and assaults between groups.  Later, a deal was struck between the Museo del Oro in Bogotá (which I’ve written about previously) and the robbers, such that each would split the finds 50-50.

You might be wondering why the grave-robbers began digging into the centre of each of the houses to find treasure.  As it turns out, the people had a two-stage burial process when somebody died: the first stage was to bury them in the foetal position with a liana tied around them and surrounded by their important treasures.  After a while, the mamu would tug the liana to see if it came out cleanly, and then they would know that the body had been reduced to bones.  Once this happened, the bones and treasures would be gathered into a bowl, and buried in the centre of the person’s house.  Ergo, the strategy.

The Lost City, la Ciudad Perdida, was originally known as the ‘green hell’, due to the difficulty and danger in reaching it.  Later, it became the slightly more tourist-friendly ‘lost city’.  It also has an official name with archaeologists, which is the name of the nearby river + ‘200’, as the two hundredth settlement discovered in the valleys.  It’s thought that the original name may have been Tayuna, for ‘earth mother’, and to be honest, that name just feels right for the place.

We started climbing the terraces, finding more and more spectacular views.  The city itself is wondrous enough, but the location itself is breath-taking.  There are views of a beautiful waterfall tumbling down the mountains, verdant valleys all around, and luscious greenery as far as the eye could see.

In leaving, we headed around the side of the hill, rather than taking the ‘VIP’ entrance as previously.  Here we saw the remains of male and female huts, plus some local plants, including one which our guide Miguel used to turn his hands purple.  (He was demonstrating the use of the plant, it just had a fortuitous side effect :).)

Descending the treacherous stairs once more, we headed back to where we’d stayed the night for some lunch; then it was back on the road, to camp Wiwa, where we’d had lunch the previous day.  This involved going back down the hill which had just about killed all of us the previous day, and the going down was by itself easier; a huge bonus was the fact that a few of us were able to send our packs down to the camp by mule, for a measely three euro.  It was a bit of a no-brainer!

We’re now at Wiwa, where a few of the others have just been swimming at a nearby waterfall.  At this point I’m more excited about a shower and some food–not to mention bed!  For the next two days, we’ll be heading back to the start, which should be comparatively easy-going in comparison to today and yesterday.

On that note, our distances haven’t been huge, though they’ve been very hilly (and steppy!).  On the first day we walked 12.2 kilometres; yesterday it was 19.1; and today it’s been 20.6.  We definitely deserve our dinner :).