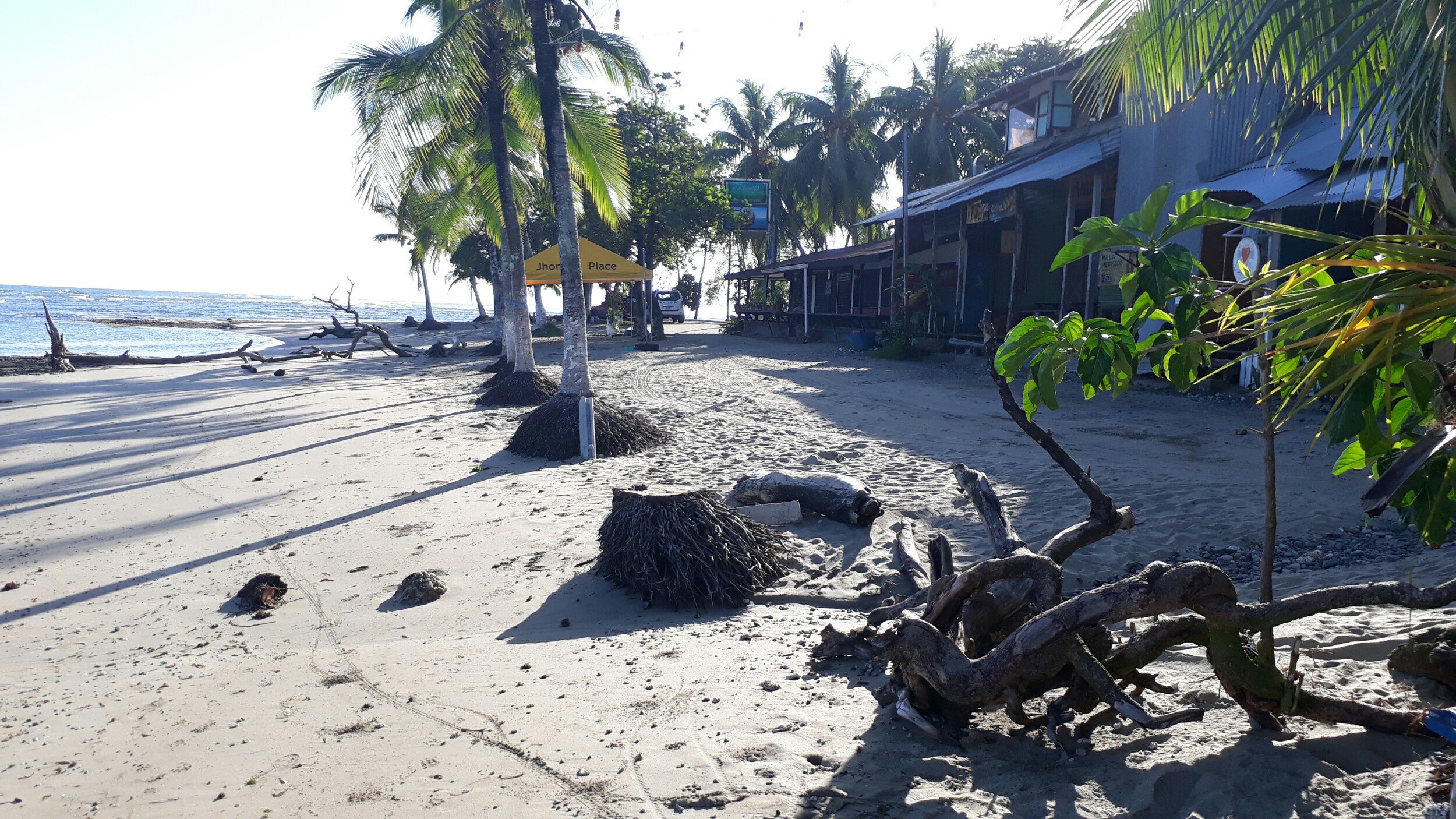 After our long standing bus arrived in Puerto Viejo (and I had been indoctrinated into the local radio stations), things went rather quickly downhill.  Walking to our hostel, people were looking at us appraisingly–and not in the ‘check out the gringas’ kind of way, but more in the ‘we could definitely rob these chics’ kind of way.  We made it to our hostel, however, that wasn’t any better at all.  We were greeted by a guy who gave off the weirdest vibe, who led us around the hostel before disappearing once more. The living area of the hostel was nice, but the rooms were gross–my bed was literally a mattress on the floor in the doorway, and in the path of water leaving the shower. Also, while it had a mosquito net, it didn’t actually reach the mattress, which kind of defies the point.  The whole place felt unsafe, so the moment I had the WiFi password, I started looking for somewhere else to stay.

After a brief and over-priced dinner at Koki Beach, which is full of rainbow-coloured rocking chairs and similarly-hued beverages, it was more than bed-time.

First thing in the morning, it was time to check out the town: in large part because I’d somehow forgotten to bring a bikini!  After a humungous breakfast, I finally found one, while Anouk managed to buy 2-3 sets and a new wardrobe.  We also checked out a couple of prospective places to stay, including one I’d spotted the night before, called Veronica’s Place.  It was run by a friendly family and full of cute little coloured cabinas, so it was clearly the place for us :).  Newly equipped with bikinis, and with our room available, we grabbed our stuff, hired some bikes, and headed for the beach.

Playa 506 is a hostel located at Playa Cocles, which I’d seen advertised while trying to find somewhere to stay.  It was too expensive (USD20 for a dorm bed, wtf), but reviews had said the restaurant was nice, so we stopped for a snack (a delicious Greek salad!!) and a drink before carrying on.  Our next step was Punta Uva Arrecife, which had a cute little beach for some proper swimming.  As always, Anouk went in the water first, as once I get in, there’s no getting me out!  Though in this case, I pretty much crawled out and went straight to sleep in the sun for an hour.  It’s lucky the UV index seems to be so low here.

Under the shadows of raucous toucans, we then cycled back to Puerto Viejo properly, finding somewhere with drinks and WiFi so Anouk could message her boyfriend, and then bed.

Playa 506, where seats come with puppies