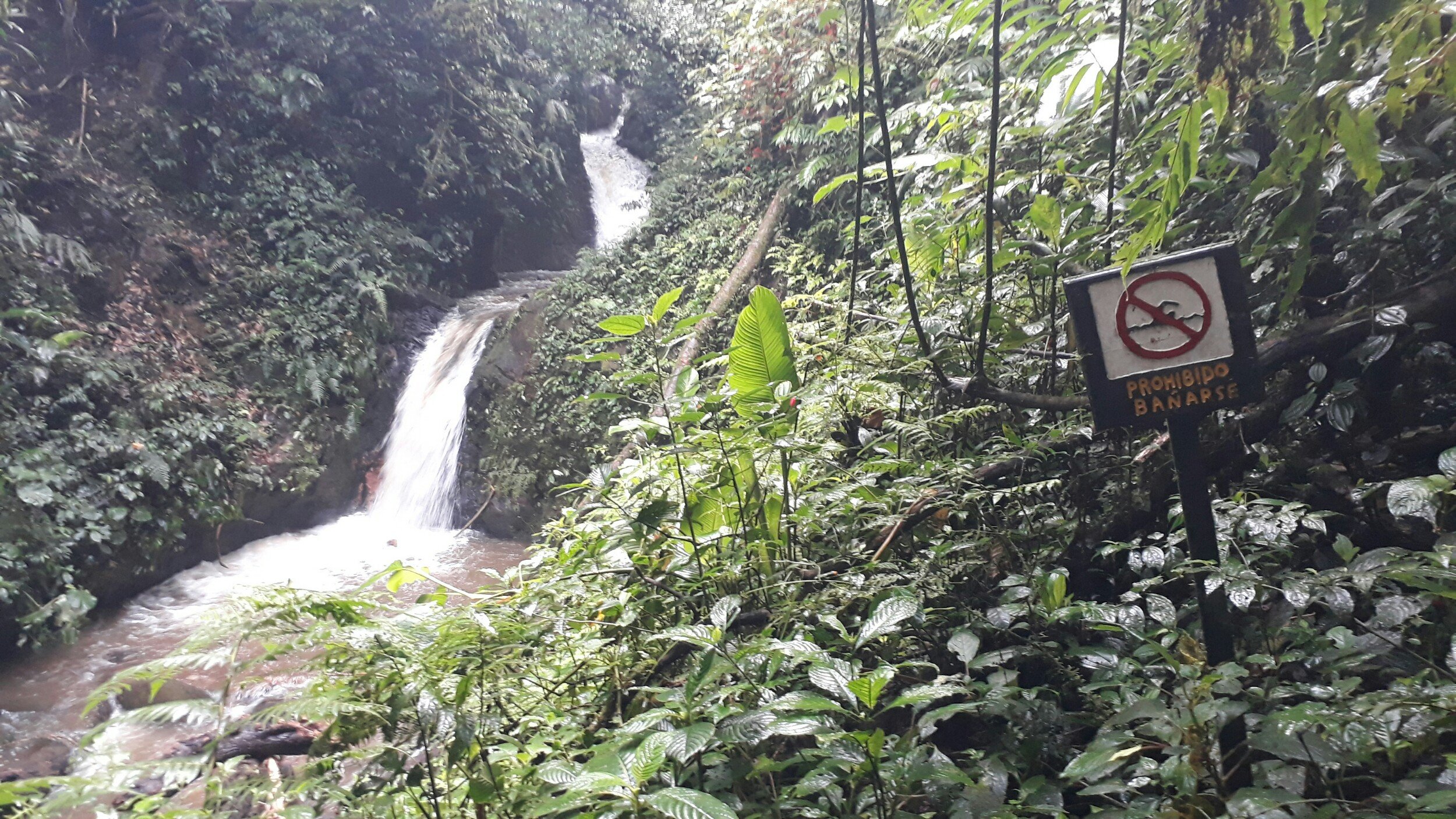 Waking up fiendishly early, we made ourselves ready to catch a bus up to Monteverde at 06:15. It’s possible to get a tour which picks you up from in town and takes you up, but they’re $100+. No, thank you! As it was, we ended up on the same bus as the local guides and national park staff, who were making their way up to work. The park itself didn’t open until 7am, so we were kicking around for bit, in the process missing seeing a jaguar by about 3 seconds (we were standing in exactly the wrong spot to see it). Grrrgh (as the jaguar would say).

We paid our park entry ($14) and for a guide ($17), which was very firmly recommended by the internet. In the end, it was only the Dutchie and I waiting, so at 7:30 we set off with our guide—and, in fact, a second guide, who was in training. They were both avid ‘birders’, which was quietly hilarious. At one point we saw what is apparently a very rare bird in Monteverde, and the main guide was overcome with emotion—he was tearing up, goosebumped, and had to take a few minutes to collect himself after seeing it. We mainly learned about a few trees, e.g. fig trees, which create some dramatic exoskeletons, and birds, and we saw a female quetzal (though sadly not one of the bright blue males). Anouk wasn’t a huge fan because she’s not into birds, and I’m not especially into them either, but it was very touching to see the guy completely lose it over a little brown feathery thing.

Post-tour, we hitched back down to our hostel, ready for the next trip: we were to be picked up to go to the Selvatura hanging bridges, which is another of the ‘must-dos’ in Monteverde. A lot of people go there to do the zip-lining through the forest canopy, but they may or may not be the worst. As you’re walking through the jungle, you just hear the squeal of the zipline and the yells of idiotic tourists, scaring away all the animals. Needless to say, we didn’t want to contribute to that. The hanging bridges, however, were lovely: they’re built very high up, so that you’re amongst the jungle’s canopy, rather than down on the ground. They give some brilliant views of the trees and the flowers in them, and I had a lovely time taking photo of what probably felt to the Dutchie like every single flower or interesting plant I saw… 🙂

We were again on a tight time-line, so we jumped on the 1pm bus back down from the hanging bridges, making it to our hostel in time to catch the jeep-boat-jeep to La Fortuna. To get there, you have two options: head to San José and then north again, meaning a full day of travel; or pay $25 to make it around 3 hours, with a jeep bus to Lake Arenal, a boat across the lake, and then another bus to your accommodation. I was nodding off for a lot of the first ride, but it seemed like nice scenery, and we were surrounded by another dramatic storm, which essentially rendered the muddy roads into small rivers. Driving in Costa Rica must get exciting, at times…!

After what was a looooooong, strangely successful in defeating-Costa-Rican-units-of-time kind of day, we made it to La Fortuna, where we stayed at Arenal Backpackers’ Resort. We were planning on having a rest day the following day, so wanted somewhere we could chill (though, unsurprisingly, we saw yet another change of plans…!). We ate at the hostel and played a game of cards, the rules for which Anouk tried to explain to me, but I was so tired that I was incoherent. She said it’s lucky she knows that normally I have a brain…!