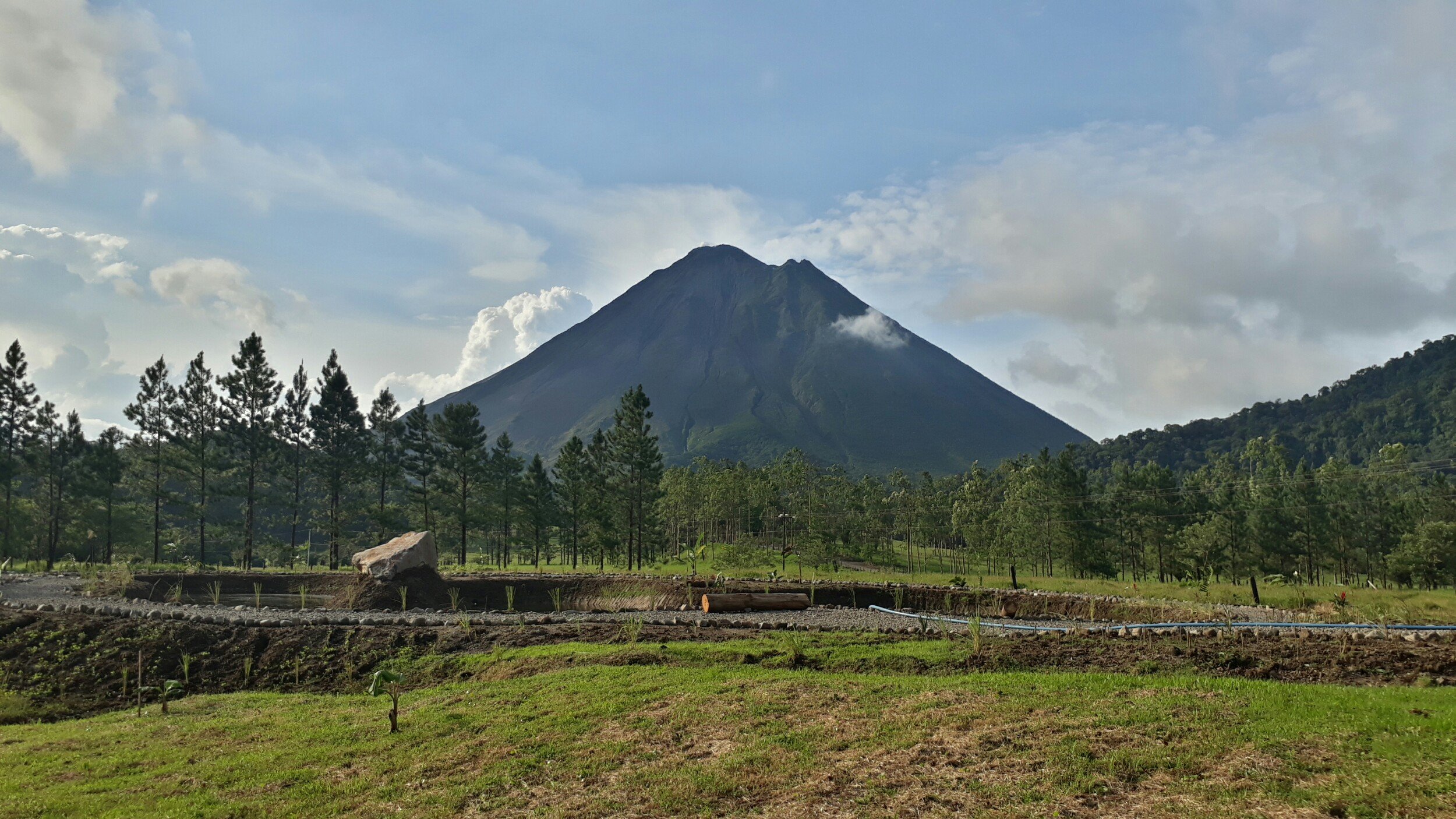 Our initial plan for La Fortuna was to take a rest day, before checking out Arenal volcano the following day then heading to San José. However, that didn’t take into account that it was in no way possible: the last bus to San José leaves at 4pm, which we wouldn’t be able to make. Instead, I decided to book a trip up Arenal for day 1 in La Fortuna, and the Dutchie decided to join in.

Despite what the posts of the past few days may indicate, i’m not actually a big fan of tours.  Particularly tours with lots of people, and PARTICULARLY where those people are loud, inconsiderate trashpackers.  However, the ‘two volcano tour’, at USD55 per head, was going to be far cheaper than trying to get to and from the volcanoes and hot springs ourselves.

Our first night in La Fortuna was exceptionally unpleasant.  We were in a 6-bed room with four Frenchies, who were col-oss-al douchebags.  I’m personally most pissed about one of the girls turning off the air-con: it must have been around 40 degrees and 80% humidity in the room, which was absolutely impossible.  The Dutchie is most pissed that one of the other girls decided to unplug Anouk’s phone and things so that the French girl could use Anouk’s adaptor plug without asking. Also, their shit was absolutely everywhere.  (As I’m writing this, we’re on a bus from San José to Puerto Viejo, and the Dutchie repeated the joke that “no wonder Brexit happened–they just wanted to get away from the French!”).  The hostel guy who checked on our air con was just as confused as I was, and they were super-nice about moving us into a better room that evening.

Anyway, the volcano tour didn’t start until 9am, which was a thoroughly leisurely start to the day: it even enabled coffee!  We along with around 25 others were picked up in a small bus and taken to the foot of the eastern flank of Arenal volcano.  After being briefed a good five times on the plan for the day, we set off with our two guides, Augosto and ?Salezir?.  Anouk and I carried along at the front, until the second quick stop.  At this point Salezir (he had a really long very Spanish name, so he’s going to have to forgive me for getting it entirely wrong) asked the rest of the group to wait, but they carried on instead, so we got a bit of a private chat about banana spiders and the ‘piano bird’ we could see (pajaro de piano, so named because its wings look like the keys of a piano.).  He took his sweet time giving us as much information as he could, obviously upset that the others hadn’t listened to him, and so we learned that the lake we were presently looking at had been formed via lava flow, when the molten rock cut off the flow of an existing river.

We carried on and Augosto joined us, as he’d gone off to collect two late-comers.  He then took the lead in taking us up towards Arenal’s volcanic scree fields, with alot of clambering and slipping on mud on the way.  We were lucky to see and be followed by a big group of spider monkeys (monos arañas), one of the three kinds of monkey in the area.  We also saw some jaguar scratchings, and those of another big (albeit smaller) cat.

Once we reached the scree field, the view was spectacular, encompassing the volcano itself (which, it has to be said, is super-volcano-y), and down through the valley.  When Arenal last exploded, in 1968, the resultant toxic cloud took out the town sitting on one of its flanks, while La Fortuna, on the other side, survived.  Hence its name, as the fortunate survivor.

At this point a volcano selfie seemed appropriate, so Anouk and I were making our way to a suitable rock, when I suddenly forgot how walking works.  I instead threw myself at the ground, in some kind of slow motion, ending up losing maybe a quarter of the skin on the side of my thigh, grazing my ankle, elbow, and rib cage, and getting a colossal bruise on my ass in the process.  Saved my phone, though, so that’s a win. Plus, it looked like I’d fought off a jaguar: totally badass.

I actually didn’t realise I was bleeding until Anouk told me to hold still, as she was picking bits of dirt out of me; she then quickly stopped, with an “oh, GROSS”, realising she was also navigating bits of skin that were hanging off me.  I gave it a wash, though, and it was fine.  I assured everyone that I was okay–and a few days later, I still am, albeit with some nice bruises developing–and I heard someone mutter about the ridiculousness of Australians.

We next made it back down the hill to have lunch, whereupon one of the guys decided to break out a portable speaker and blast some music–because who’d rather enjoy the sounds of the jungle, right?!  Another guy was preening himself prior to swinging using a rope into the lake.  Apparently he’s a Dutch TV actor who spent all of ten seconds as a backup dancer on Magic Mike, oh and would you like to hear about his exercise regime?

Post-lunch we saw a cool little frog, which a local picked up to show us–and then naturally, the trashpackers all started grabbing and holding him.  I mean, show some respect for the little creature–and the fact that they all had sunscreen and bug spray on the skin with which they were handling the creature is very dangerous for it.  Come to think of it, the previous day a bunch of Germans (and I mention the nationality because German tourists are often some of the most respectful) on the hanging bridge walk had been pulling branches and lianas out of trees, damaging the rainforest.  Who ARE these people?!

Once more at our starting point, we piled into the bus and were driven to another flank of the volcano, which unlike the first, was covered in verdure.  Our first stop on the new walk was a waterfall, Catarata del Dantas, which was astonishingly beautiful.  It was around 12 metres, overflowing, surrounded by moss, and air of the basin itself was laden with rainbows.  Augosto told us it was possible to go behind this waterfall, too, so we got straight in the water and started feeling our way around the wall.  I made it okay but Anouk was struggling a bit, and the guys kept clambering around her, which wasn’t very impressive.  At least it gave her the chance to tie on her bikini more tightly, I suppose!  Luckily, as I was first in, I had plenty of time to quickly fix things up before anyone else arrived.

Once I’d gone back to get Anouk and she’d been behind the fall as well, we scampered out to go and get dressed, so that we would be ready to leave for our next stop.  This was a hanging bridge, much more tempestuous than those of the day before.  We then wended along a road surrounded by rainbow eucalypts, stopping for an amazing view of Arenal and then a brief talk about its sister volcano, Chato.  It was then time to catch the sunset, seeing some FREAKING TOUCANS on the way, before heading to the hot springs for some mud masks, drinks, and relaxation.  I was being careful of my leg so didn’t want to move much, and ended up talking to a nice Chilean guy who will shortly be moving to Australia.  Anouk, meanwhile, found a pool with some other Dutchies (including our actor friend)  Accompanying dickheads aside, it was a great day.

When we got back to the hostel at around 19:30, I have to confess that I had the same dinner as the previous evening: chips slathered with fresh vegies, beans, and so many types of cheese.  Then again, I feel like I deserved it.