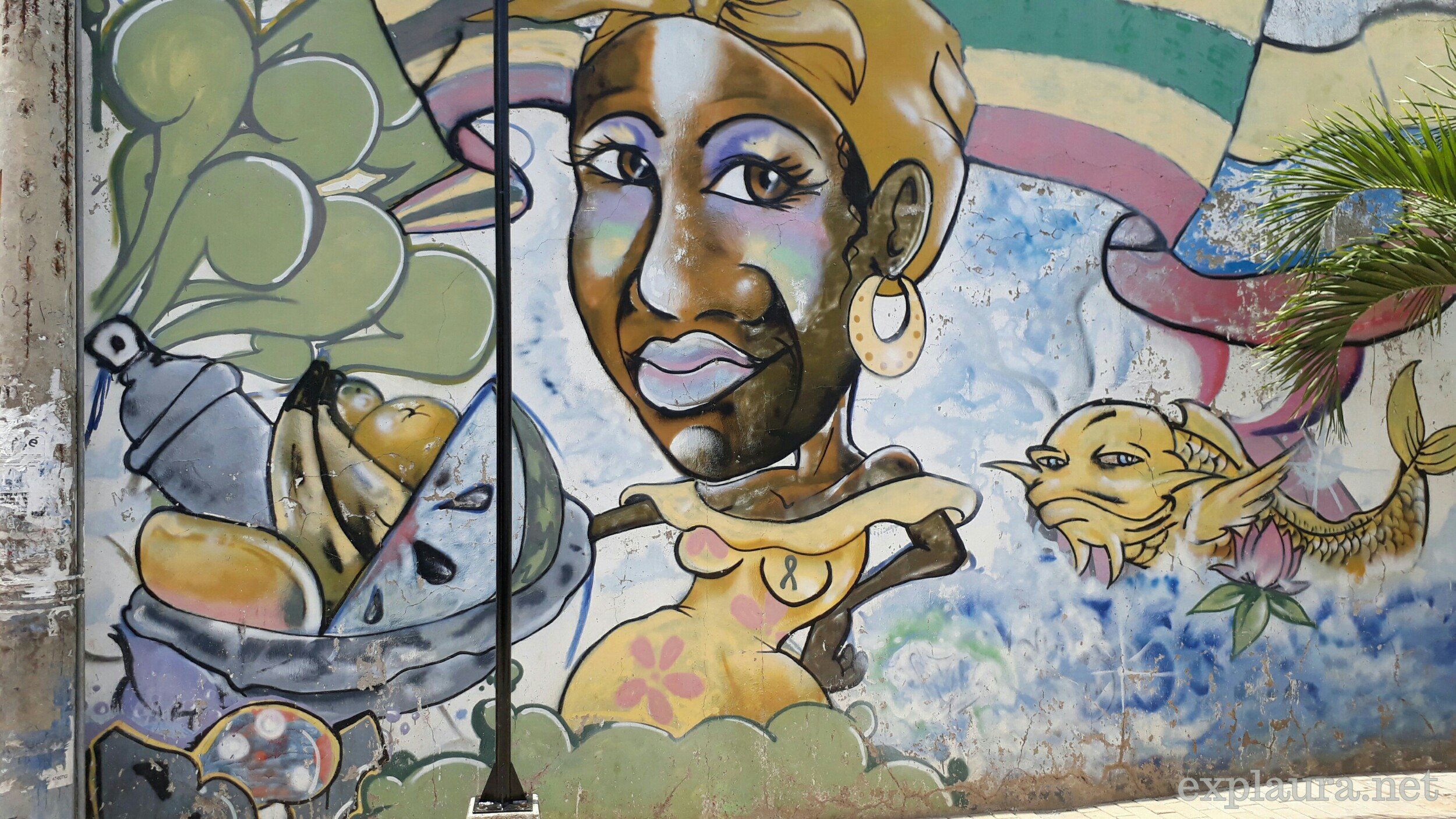 I love Cartagena.  It’s like Lisbon would be, if Lisbon were better.  Because while it has the colours and tiles and flavours of Lisbon, it’s not as controlled: colours, like life, are raucous; there’s little colouring between-the-lines.  And while I appreciate living in places where things are organised to an almost concerning extent, for travel, I’d rather go to places a little more libre.

Happily, soon after writing the other night, our bus stopped for a ‘five minute break’ at a depot in Barranquilla, halfway between Santa Marta and Cartagena on the Carribbean coast.  I immediately went in quest of food, fending off some of an infinite number of overly-persistent taxi drivers, but came up empty: then I realised I could interpret it as a ‘Colombian five minutes’, i.e., as long as I liked.  In the end, I managed to fetch up with a cheesy croissant, and some kind of donut thing full of a sweet flavouring.  Is that creme de leche?  I’m going to go with yes.  (The Dutchie later told me that apparently the driver was a bit “where the hell did your friend go?!”, though expressed in the most affably Colombian of terms, of course.)

We made it to our hotel in Cartagena, to hit the streets reasonably early the following morning.  It was Anouk’s birthday, so after she’d gotten back to her messages (something I’ve still, for the most part, failed to do…), we went for a stroll through the gorgeous centre, then a drink at a rooftop bar by Martyrs’ Plaza.  The Dutchie was still ill, so it was set to be a fairly relaxed day.

Next it was off to find a spa, where the Dutchie would spend her afternoon.  Meanwhile, I’d fallen in love with the lurid colours of the local artwork, and uncharacteristically (for a girl who outright refuses to go to a gallery), decided to go make an acquisition or two.

As such, I spent the afternoon walking from place to place, checking out El Arcon Anticuario (full of Cartagena-style door knockers, including some antique versions ranging up to 2k euro!) before heading to the souvenirs market at La Bovedas.  These sit beneath Cartagena’s old defensive wall, in what were first storage locations, before becoming prisons, and now a souvenir mart which, come 4pm, is packed with busloads of tourists finishing their day.

I had some great conversations with vendors, both in and outside of the cells, working my way down from stores 26 to 1, and looking at each and every painting.  I had the idea of three small yet colourful images of Cartagena’s streetscapes–but it was not to be.  Because I reached store 2, looked up, and fell immediately in love with the most humungous and impractical of paintings.  ‘Oh no,’ I thought to myself.  ‘What have I done?!’

This painting was around two metres across, and around 120cm high.  Unlike most of the local paintings, which show bright daytime scenes with sharp lines and bursts of colour, this was entirely different: it’s a nightscape of Cartagena and the ocean, but everything is dreamlike.  A man is playing a saxophone in the foreground, but his clothes fade into the waves, which in turn fade into distant looming ships and the sky.

…you may have gathered that I left with this painting: and you would be right.  Because a two-metre painting is an entirely practical thing to travel with, of course.  (I’ve since posted it to my friend Tilly in the UK, to pick up when I next swing by London: the Belgian post is never to be trusted!)

Now that I had met my acquisitive needs, I headed back to the hotel for a well-deserved shower before heading back out to meet with Anouk.  She’d finished at the spa, and was drinking a mocktail at a nearby square.  Despite being ill, she decided to eat ceviche (think: raw octopus), which she’s definitely been feeling since.  Thence to KGB bar, a bar filled with USSR memorabilia and what seems like an entire Russian submarine, before bed.

The following day–yesterday–dawned at a very civilised hour, as far as we were concerned.  Next in my plan was attending a group salsa lesson, which is uncharacteristic (again) for many reasons.  For one, workplace aside, I’m pretty open about my fairly acute PTSD–I have to be.  So I don’t like having to be in a room with a guy, or anybody touching me, or really anything at involving my body.  Hence, dancing is pretty amazingly out.  But I trooped along to this group, only to find that I would be the only attendee: and it was just me and the instructor.

Granted, the instructor was an absolutely lovely guy called Mauricio, who sang and smiled the whole time.  But holy shit was that a difficult experience.  I don’t even know how I made it through.  I mean to be fair, I didn’t make it through in any kind of co-ordinated fashion, so I’m not altogether sure it counts.  At one point my knee decided to take a little adventure of its own, to which even Mauricio said, “well that was weird”.

That said, people without my hangups should definitely check this place out: it’s called Crazy Salsa, and it’s two blocks south of Place de Moneda in Cartagena.

Post-lesson and after sorting out the sending of my painting and assuring myself that Anouk’s salt-cracker-and-water needs were met, I headed to Ábaca/Abacus bookstore to do some Spanish grammar.  To be honest, I didn’t last long: I was beyond tired, for whatever reason, so I did a few units, then opting for some book-grazing.  Given I’ve now acquired three Roald Dahl books in Spanish, one and a half of which I’ve yet to read, it was definitely not time to purchase.

Next I went back to the hotel (which, as you may have gathered, was very conveniently located), to drop off my Spanish grammar book, and grab my Kindle.  The idea of sunset, cocktails, and a good book didn’t sound too terrible.  As it was, I headed to Cafe del Mar, on the sea wall.  I found a table with another solo reader, ordered cake and a cocktail, and settled in for nearly four hours of heaven.  Between the luxuriant weather, the air that’s so thick it feels like a caress, the Cafe del Mar tunes ekeing their way up the back of your spine, the smell of salt, a good book and an open sky, it was impossible to imagine how I could ever leave.  It was one of those nights where it feels like the elements have conspired to take away everything of substance, until you feel like just a surface of skin surrounding air, rendered invisible and indivisible from your surrounds.  Absolute heaven.

Sometime well into the evening, and reluctant to embroil myself into another chapter (or I’d be there all night), I settled up and headed for another stroll along the bastion towards Gabriel Garcia Marquez’s old house.  I can see why Cartagena inspired him so: there truly is a magic to it.

As I approached, the sounds of music became apparent, and so I investigated: some older men were playing a range of unusual instruments on the rampart, including one which I’m sure is a ‘real thing’ but looked like nothing so much as an elaborate cheese grater, and as they cheered and sang, waves kicked up spray behind them.

At last it was time to get my invisible self to bed, because while it’s difficult to let a night such as that go, today we would be heading to another beloved place: Medellín.