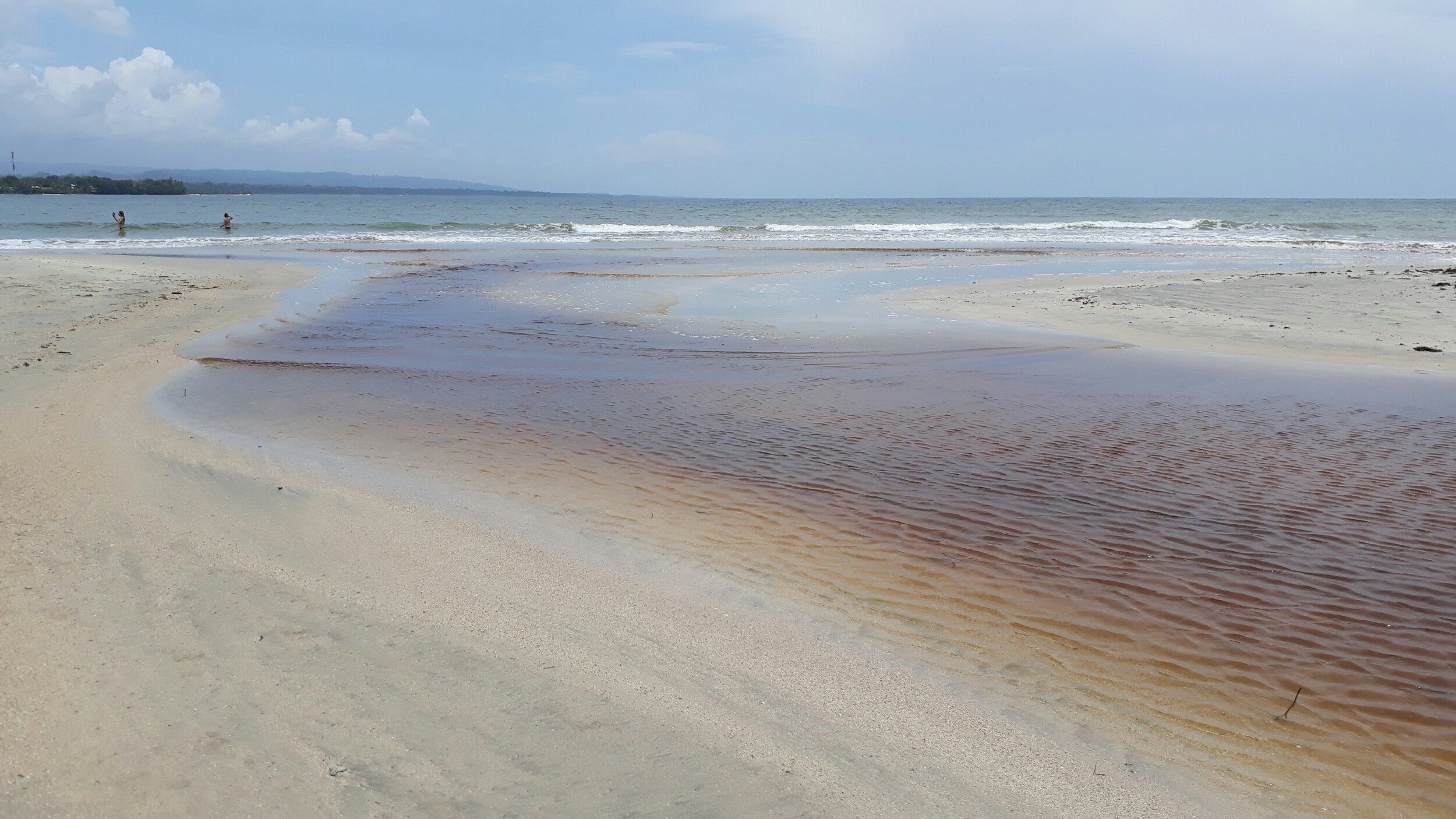 Imo, Cahuita National Park is a must-see in Costa Rica. It’s an absolutely beautiful little park, full of wildlife, nestled against the ocean just north of Puerto Viejo on the Carribbean coast.  Before anything else, though, we had the most epic of breakfasts at ‘Bread & Chocolate’, in town.  Oh my god.  Have scrambled eggs ever been so delicious?!?!  Though I could barely walk afterwards…

We headed to Cahuita at a fairly leisurely 9am, catching the local bus straight there from Puerto Viejo.  After being dropped off in town, we stopped to buy an exceptional amount of nappy rash cream, because between being the sweatiest human imaginable and the vicissitudes of bike riding the day before, I had no thighs left to speak of.  At least, not thighs with skin on them.  We also tasted some kind of dragonfruit-looking thing which tasted a bit like grapes and peaches.

Next it was on to the national park, where we paid a donation fee, then got to walking.  We walked quickly at first, wanting to outpace the dawdling tourists, and one of the guides took us to task, saying “go! Go with your stress!”.  Forgive us if we’d rather listen to the sounds of the jungle than to inane chatter.

The trail follows the curve of the beach around the coast, and we stopped for a dip before it came down the eastern side of the promontory.  It was such a lovely walk–we saw hermit crabs, big dark pelicans, a real-life wild raccoon, some very noisey howler monkeys, lots of butterflies, including those gigantic blue ones (speaking of which, one thing I forgot to mention in my Monteverde post was seeing the most amazing butterfly–its wings were entirely transparent, like glass, with just a rim of brilliant yellow and scarlet outlining their edges.  It was gorgeous.  And kind of impossible.).  We ALSO saw a SLOTH!!!  A SLOTH!!!  Given I’d been walking along with my face pointed to the sky looking for one, I feel like we more than deserved it.  And what a cutie!

Post-swim, we continued to follow the trail, then switching to the road along the coastline.  It definitely wasn’t the right way to go, but we had some spectacular views of dark abandoned beaches.  A park ranger drove past us and clearly went ‘wtf are these white girls doing’, and then started following us in his car from a distance, I guess making sure we weren’t attacking ocelots or anything.

Near the exit to the park, where the bus stop would be, there was the entrance to a long wooden walkway, through land that was more swamp-esque than that we’d encountered in the park until then.  We started along it, listening to the sounds of the birds, looking at spiders, and being party to a big argument between a few groups of howler monkeys.  They’re so loud!  It sounds like there are gorillas in the trees, something huge and meaty, rather than these tiny little fluffbuckets.  And what angry fluffbuckets they were.

Finally leaving the park, we made it back to Puerto Viejo, and weren’t capable of much before sleep.  Again, though, Cahuita was gorgeous, accessible, and an absolute must-see.