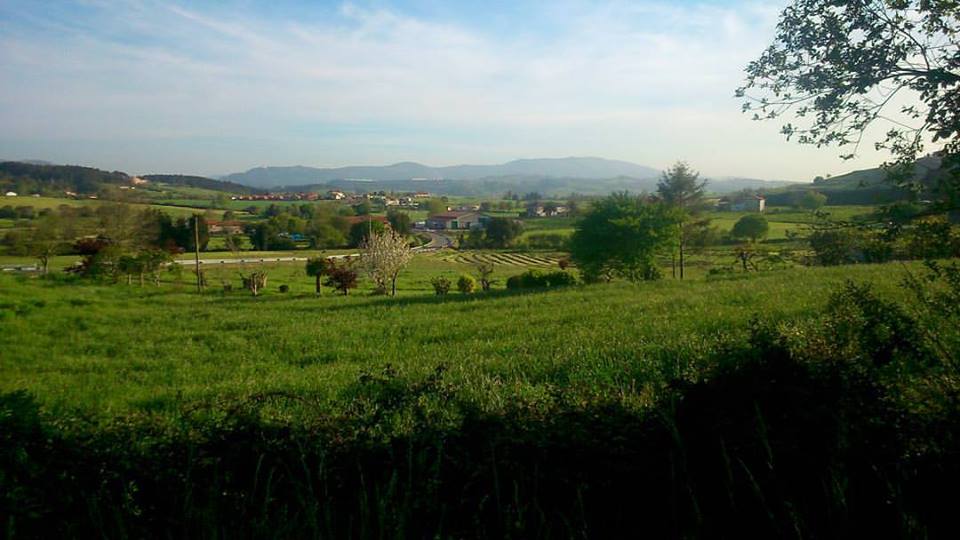 The stretch of the Camino del Norte beween Santander and Santillana del Mar was one of the most beautiful parts of the walk (though admittedly, I’d recommend it on a bike rather than on foot, due to all the asphalt, and in order to speed past the more-boring parts!).  It was a great day at a bit over 40km, full of lots of sweet little towns.  Additionally, Santillana del Mar was absolutely stunning, and one of the most romance-imbued places I’ve ever been—a big call, given my cynical tendencies!

I’d planned on getting up early, though that definitely didn’t happen.  As such I left late, but was still in time to see some beautiful filtered morning sun falling through the town of Santander as I left it.  I’d made the fundamental error of starting to read a Carlos Ruiz Zafon book—the Prince of Mist—and that meant that there would be a lot of stops throughout the day.  I spent hours at different places reading, including at one place recommended to me by Dan and Audrey, Condado de la Mota, where I had a really lovely salad.  (It’s an exciting life I lead, n’est-ce pas?)

As suggested above, between the beautiful views was a fuck-ton of asphalt, and the odd boring bit.  One part of the trail ran next to a big concrete pipe, and while it was flat, it was gravel, and very hard going with the heat.  On the upside, for some of it I took a little detour and walked through a waterfowl reserve, where there was a veritable steamboat of the Tom Sawyer variety tooting along.

After many stops, and many more photos of cows (by this point I felt I must have taken at least 500 photos just of cows), I found myself in Santillana del Mar.  It’s an absolutely beautiful medieval town (though despite the name, is nowhere near flat, and nowhere near the sea), and I feel like it should be a compulsory expenses-paid trip for any game designers creating sets for medieval Europe.  It was also very romantic, and everyone everywhere was making out.  There was one couple in their late 60s who were all over each other in the main square, which was hilarious, at least partly because the man was super awkward.  So much hover-hand.

I did manage to arrive at the albergue ten minutes after check-in had closed, and didn’t really know what I should do.  There was a German guy out the front of the hostel, and so I asked what the hospitalier looked like.  He said that he had a beard.  I asked how tall he was, and the guy stood and gestured at about 6’2—so, pretty tall.  Okay, so how old?  The guy said 30, 35.  So I went wandering the town and by the museum where the hospitalier otherwise worked, looking for a tall bearded guy in his early 30s.  I didn’t succeed.  Then, when I got back to the albergue, the German guy goes “he might not have had a beard, actually”.  And he might not have been that tall, and he wasn’t sure what age, either.  So yes, it’s unsurprising that my search for some guy, of some height, who may or may not have had a beard and been of an age, wasn’t successful.

I stayed at the albergue anyway, using my gear for bedding, and leaving some money in the morning.  The next mission was to find some food before crashing, as I was ravenous.  Walking around, a lot of venues were closed, but were noticeably fancy.  One even had a Michelin star (?!).  At the restaurant I ended up in, I devoured the entire plate in a few minutes, to the point the waiter came over and made fun of me for it.  After a nice (less-abusive) chat with him and one of the waitresses, it was finally time to head back to the albergue for bed.

On my trek to Santillana del Mar, I’d been back-and-forth with a Spanish group from Barcelona all day.  There were about eight of them, maybe three girls and five guys, and they were all very good-looking.  Collectively, it was like seeing a real-life catalogue.

Anyhow, getting up to leave in the morning, they were putting on their boots at the same time as me.  One of the girls hummed a bar of music, and the next thing you know, several of the guys had broken into song.  My excitement level went zero to a hundred immediately, and I asked if they’d be dancing next.  I mean come on, real life musical—yes!!

Around 8km into the day’s walk, I received a comment on Facebook asking if I’d been to visit the Altamira caves near Santillana del Mar.  And this is where my slap-dash approach to planning trips (i.e. not planning them at all) lets me down: these caves are something I would have loved to see, they are exactly my kind of thing.  But by this time, I was already well on my way, and had I gone back, that would be adding 16km+ to my day.  Given the day before had been over 40km again, I was trying to keep to around 20-25km for the day so that I didn’t overdo it.  I’m just going to have to go back.  Oh, no!

And so I kept trekking on, encountering a bunch of Frenchies near one of the ubiquitous churches.  They didn’t have any English, so I had a halting (yet protracted) conversation with them in French.  Weirdly, speaking French outside of French-speaking countries doesn’t bother me anywhere near so much.  I don’t speak it in Belgium, and didn’t really last time I was in France, either.  I just do not enjoy that language, at all.

Finally reaching a town with an open bar, it was time for my first café con leche for the day.  Peregrinos definitely run on coffee.  On the wall I saw a little plaque, which read

Is that not the perfect saying for my circumstances at the time?  Which, to be fair, was probably the point: I’m sure I’m far from the first hiker who has stopped there.

I had a truly awful lunch just outside Cóbreces, before deviating somewhat from the track to go to the beach at Playa De Luaña.  After a spot of sunbathing and blister-repair at I continued following the line of the coast, bypassing Liandres, and hitting the final stretch towards my destination Comillas.  I was starting to get quite tired; I knew that the albergue had limited bedding; and there was a group of around four German women about neck-and-neck with me.  The mission was on to get there first.  But could I find the blasted place?  No, no I could not.  The town’s site and the Camino guide alike didn’t list an address, and I didn’t see any signs.  So I spent rather some time walking up and down the hills, all around the town, before finally asking somebody.  I think he may have gathered I was getting a bit tired, and so he walked me right across town (giving me explanations and descriptions on the way) and almost to the door.  What a hero!

My day pretty much ended with having my washing rained on, some noisy older Germans in my room, and a set of seriously disturbing advice about what I should do to resolve my blister problem.  But by that point, I didn’t even care—I had a bed, and there would be no more ‘vertical’ that day.