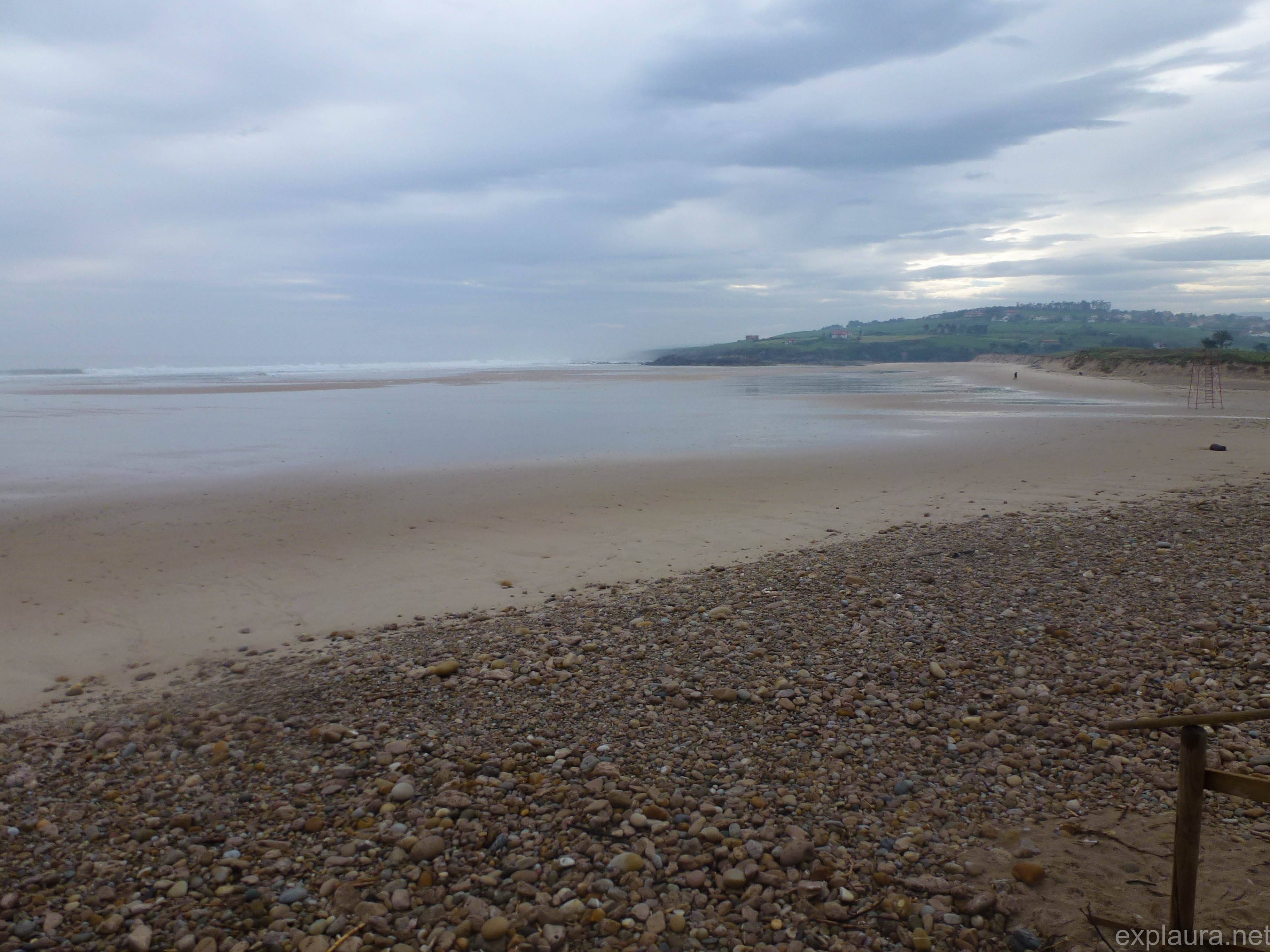 Days 17-19 of my Camino del Norte were far from the most eventful, with illness, a bit of boring trail, and a seriously dirty pension.  All part of the experience, right?

The day after Comillas, my intention was to head to Colombres.  Not because it’s a major stop on the trail, but because the name’s close enough to ‘Colombia’, and I just cannot wait to go back to that country…!  Unfortunately however, I wasn’t feeling too well, and so the going was slow.

That morning was a rather lovely walk.  I stopped at a surf club a few kilometres out of Comillas, had a chat, and avoided the rain.  I then carried on to St Vicente de la Barquera, another picturesque waterside town, but was feeling so bad that I went straight to the pharmacy to hit up any drugs I could find!  Incidentally, pharmacies in other countries are often an interesting experience.  My most memorable visit was a pharmacy in Medellin, which involved a whole lot of miming for the pharmacist (and a rapt audience).  Typically I only end up in pharmacies if I need directions, though: I think I’ve said before, but pharmacists are pretty much the most accessible highly educated people if you’re ever lost, and as such, are very likely to be able to give directions in English.  #toptipsfromlaura (on another note, when the hell did I embrace hash-tags?!)

After my drug stop and a coffee, I wasn’t much improved, so started looking up albergues in St Vicente itself.  I went to the tourist office to ask for directions, but that I’d been thinking of was already 3-4km back.  Retracing my steps is obviously out of the question, so instead I trooped up to the local hostel.  The lady at the tourist office said that it opened at 1pm, and sure enough, when I got there, the hospitalier was there: however, she was actually on her way out, and the albergue would be opening properly at 14:30.  I explained I was feeling ill, though, and so she fetched me a chair and let me sit outside the door.

I pretty much spent the next couple of hours—as after all, 14:30 quickly turned into 15:00—reading and befriending a little robin, and giving directions to other walkers who arrived.  I ended up watching some bags for Manuela (a German girl I may have mentioned previously?) and another German-speaker, whose name I didn’t know at tat point.  Finally though, the albergue opened, and somehow I ended up on translation duty for the hospitalier for the next half-hour as people checked in.  Great for my Spanish, but not so great for my state at the time!

At long last, I found my bed.  Where things didn’t exactly improve, as there were a—and this is a quote from my very angry vocal notes—”lot of fucking assholes making heaps of noise, and lacking even basic hostel etiquette”.  Lots of plastic bag rustling (DO NOT TAKE PLASTIC BAGS TO SHARED ACCOMMODATION) and lights being switched on and off.  My only adventure for the rest of the day was to pop out for a particularly delicious dinner, but after that I created myself a circle of seclusion and ignored the world.

The next day I decided to take it easy and carry on to somewhat after Colombres, or to wherever I made it.  Briefly before leaving, I realised the German-speaker from the day before also spoke Polish (which I can understand a bit of thanks to Russian).  He was very nice, albeit out-of-control friendly, but i’m not much for mornings, and headed out shortly afterwards.

It was a pretty chilled day walking by myself.  Leaving San Vicente it was pretty much up a hill, then downhill along a somewhat boring road, so I broke out my Kindle and did some reading.  I’d finally started reading American Gods by Neil Gaiman, which I remember being recommended to me by a Dutch girl when I was 19.  At least I got there eventually?

I cruised for the first 15km, then stopped for a coffee and a protracted read in Unquera, on the border of Cantabria and Asturias.  I’d been considering stopping there if I still felt as ill as the day before, but gladly, felt good enough to continue.

I did end up bypassing Colombres just as siesta began (though happily, the supermarket lady let me duck in to buy some snacks for the rest of the way), and it seemed sweet enough.  From there, the surroundings became increasingly rural, until I finally ran into this huge freaking mega-bridge in the middle of nowhere.  Standing underneath it, I felt like the tiniest person in the world!

Dan and Audrey had posted on their ‘Uncornered Market’ Facebook about a ruta alternativa starting somewhere after Colombres, which I was totally unable to locate.  Until, that is, I reached another highway, and out of the corner of my eye saw a tiny little sign on an adjacent path.  A short bush-bashing later, I was by the coast once more, and spent a lovely time wandering through heather under a storm-lit sky.

In the end, I elected to stay in Buelna, a small sea-side town.  I had a good chat with the guy behind reception as I arrived, who turned out to be from the Canary Islands.  Manuela, from the days before, was bemused at the conversation and at my then getting bedding and a blanket for free.

As it turned out, the albergue was almost empty, and so I ended up with a room to myself.  It was amazing.  I had a solid nap before heading down for the six euro dinner downstairs.

The meal’s quality corresponded with its price tag.  On the upside, another lady joined me.  She was an Italian who had been in the bunk below me the night before (and, while tsk-ing angrily at the snorers in the room, probably doesn’t realise she snores quite badly herself).  She only spoke Italian, so as we were seated at a two-person table facing each other, it ended up being me speaking Spanish and her Italian.  It was hard at first, but became easier as we made it through the bottle of wine.  It was pretty ridiculous, but also a lot of fun.

Day 19 saw yet another lazy start.  My intention was to make it to Villahormes or just beyond, but things didn’t quite go to plan.  Basically, I got to Llanes, found a chocolateria, and thanks to some serios mistranslation on my part, managed to order the only thing on the menu that didn’t have chocolate in it.  And it was pancakes.  Pancakes are the worst!  That whole food group—pancakes, waffles, donuts, and churros—is a lazy travesty against cuisine!  (I had to throw in the ‘lazy’, because I do bend sometimes when I can’t be bothered finding real food :D.)  But in either event, my heart was no longer in it for the day, and I felt a bit like crying when I later left the restaurant and saw the remains of a hot chocolate.  I may have been exhausted, but also, I take chocolate very seriously.

I meandered on anyway, and made it a few kilometres more, to Celorio (the next town along if you exclude ‘Poo’, where I didn’t want to stay, for some reason).  I stopped yet again and went to a restaurant, where I basically had patatas bravas and coffee, went ‘fuck this shit’, and asked the waitress if there was any albergue in town.  She had awesome sparkly eyeshadow, and siad that while there was no albergue, there was a pension which cost just 12 euro a night.

And so I found myself at the cheapest of cheap pensions.  It was fucking dirty, with wallpaper peeling in wide swathes, and a ceiling full of mould.  Also, I woke up with someone else’s pube on my thumb.  Altogether, it was pretty gross.  On the upside, my room had a bath (albeit cold), and to be honest, I relished the chance to just chill and relax and have a clothing-optional day.  For the rest of the day I ate everything left in my pack, namely muesli bars and an apple, read, and rested.  The next morning, things would pick up considerably.