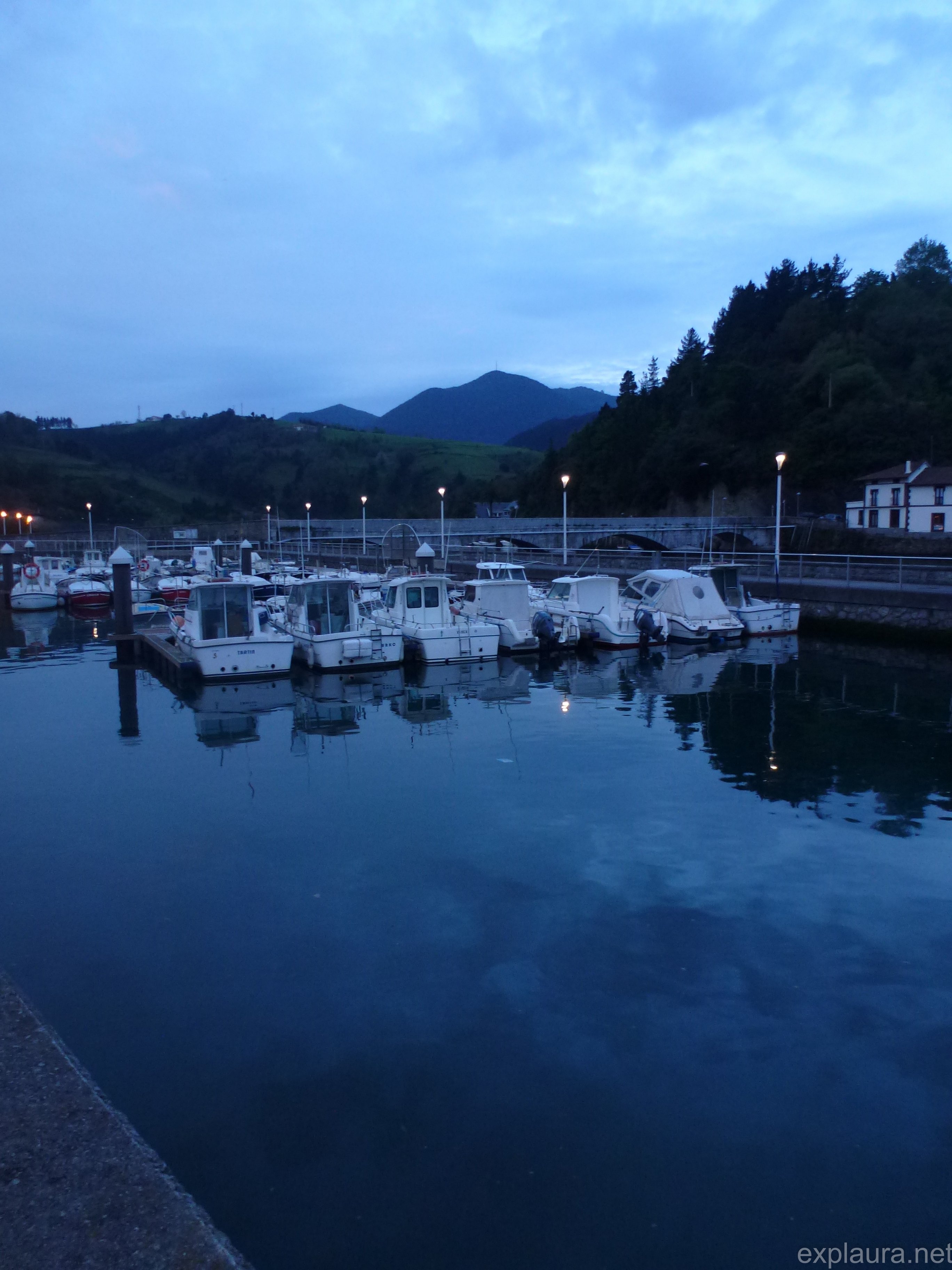 Days three through five of the Camino took us from to Deba, thence to Markina-Xemein, Gernika and Eskerika.  It also took us to around the 150km mark of the walk, which was at that point by far the farthest I’d ever walked in a week.

We woke up in Getaria to see sunlight streaming through the stained glass—though admittedly, this didn’t last very long.  After I was finally ready, me being the one holding us up every morning, we set out for yet more hills.  Rie taught me how to say ‘fuck these hills’ in Spanish, which was obviously appreciated.  However we hadn’t made it very far when suddenly I saw a frog on the road.  Now, I was quickly getting used to this ‘animals on roads’ nonsense: the previous week, I’d seen my first-ever fox in real life.  Only to have to shovel it off the road with a giant stick, because it was distinctly dead.  The week before I’d seen my first-ever hedgehog—again flat.  And I’d seen my first-ever mole (as if they’re real animals!) while hiking out of Irun a couple of days beforehand.

This was a bit different, though.  For one, I’ve seen a frog before.  For two, the poor thing had been squished but was clearly still alive.  Its back legs had been crushed but it was still breathing.  Poor little froggy!  So I took off my pack and took a sharp rock from a fence, then bashed it over the head.  Oh my god it was so gross.  I then danced around making horrified sounds for a few seconds before looking again, only to see that blood had exploded out of its eyeballs—but it was still breathing.  So I had to hit it again, which was beyond horrible, and finally it did that straight-legged frog thing that dead frogs do in Disney cartoons.  Which, come to think about it, is pretty gross.

Shortly after this (relatively speaking), we reached the top of a big hill, only to find a playground!  So naturally we had a stretching session and I played on the swings.  Result!

Most of the rest of the day’s hike was fairly uneventful.  We eventually reached Deba, where yet again finding the albergue was a challenge.  We walked past one construction site a couple of times, with one particularly flirtatious Spanish guy.  There was also a lot of leering going on in the village, which I guess was the price of wearing shorts.

By this point I was pretty tired and Rie was bounding about the place going backwards and forwards, and so eventually I just sat down and waited for her decide which way we were going.  At which point I obviously lost her.  So after sulking for a few minutes, I broke out the Spanish phrasebook and started asking directions.  And I totally got there!  The evening’s albergue was in the train station, which was cool: and from my (assigned) bunk, I could see straight out the window, over the rails to the river.

After eating the best tortilla de patatas I encountered in Spain, I decided to try and have a nap.  You see, a Korean-Japanese guy had been assigned the bunk below me, and upon meeting he’d told me that he snores really badly, that I probably wouldn’t get any sleep, and that it was part of my Camino experience.

Grrr.  Anyway, so I was trying to have a nap—and I probably would have succeeded, had the self-same asshole not proceeded to stand right next to me and broadcast to the rest of the room.  He also travelled with plastic bags, and pulled other people’s plugs out of the wall (namely mine, which is how I knew).

Needless to say, I had almost no sleep that evening, despite wandering the halls of the albergue trying to find somewhere better—even the hallway was unsleepable.  And I was *not* a happy Laura.

I took really a lot of photos of cows.

The roofs of Deba.

This little puppy chased after Rie, trying to scare her off.

The first of many eucalyptus forests we would encounter.

Okay, so for these blog posts, I took vocal notes on my phone as I was hiking.  This day’s notes started with an impassioned, “I didn’t sleep very much because of that fucking Korean man”.  And as such, it was mainly a blur.  We walked to Markina, about 25km, through on-and-off rain, especially as it got towards the middle of the day.

The albergue in Markina was in some kind of old convent.  As well as us, there was a Russian girl, and two nice Americans—Dan and Audrey, who had travelled around Australia (and here’s their blog post about it).  On the other hand, my ‘new best friend’ turned up again.  I asked the hospitalier if I could go in a different room, and he said that there was a back room, but that it would be cold.  I said that it wouldn’t be a problem, gaining myself the label ‘Nordica’.

In the end, I got the back room to myself, and curled up under several blankets for a solid ten hours’ sleep.  However, when I woke up it was super-creepy: it was just me in long cold room full of empty beds.  I was waiting for ghosts, or not being able to leave the room, or being attacked by a sock-puppet or something.  Then again, perhaps I’ve watched too much American Horror Story.

Farewell to the ocean, for now.

For day five, our intention was to walk to Gernika.  However as it turned out, the donativo albergue wasn’t open for the season yet, and who’s going to pay YHA prices?  As such, we decided to walk to Morga/Eskerika, a very hilly 35km from our starting point.  At around 20-25km I was absolutely dying.  We stopped for lunch where I had patatas con aioli while staring uncontrollably at Rie’s burger, and then set off again—but I lasted about a kilometre before needing to sit down.  I think Rie was getting quite fed up with me, but I’d eaten way too much to keep going at that point.  After a nice ten minute sit in the sun though, we set out once more.  The next 10km was a bit easier, albeit still rough.  We caught up to Gerald the German guy—we kept catching up to him every day, which doesn’t make any sense at all—and had a bit of a chat.  I also kept feeling guilty about making my poor character in Elder Scrolls Oblivion jump everywhere—oh the inhumanity!

Finally reaching Eskerika at the top of the hill, signs directed us back downhill to the albergue.  Why, Camino, why?!  But we made it there in the end, to the greetings of a very enthusiastic and very cute puppy.  The Russian girl from the night before was there, as was a group of German girls who we bumped into once after that if I remember correctly.  And happily, no snoring Korean guy.

Excitingly, I got to be the first pin! That *never* happens!

Solid use of a wreck to mark the way.

The Basque Country is very serious about its independence.

One of the many water fountains dotting the hike.

PS. I’m sorry, but I’m going to be way too lazy to edit any of the photos for the Camino series.  If I try, I’ll end up still writing these posts next year!