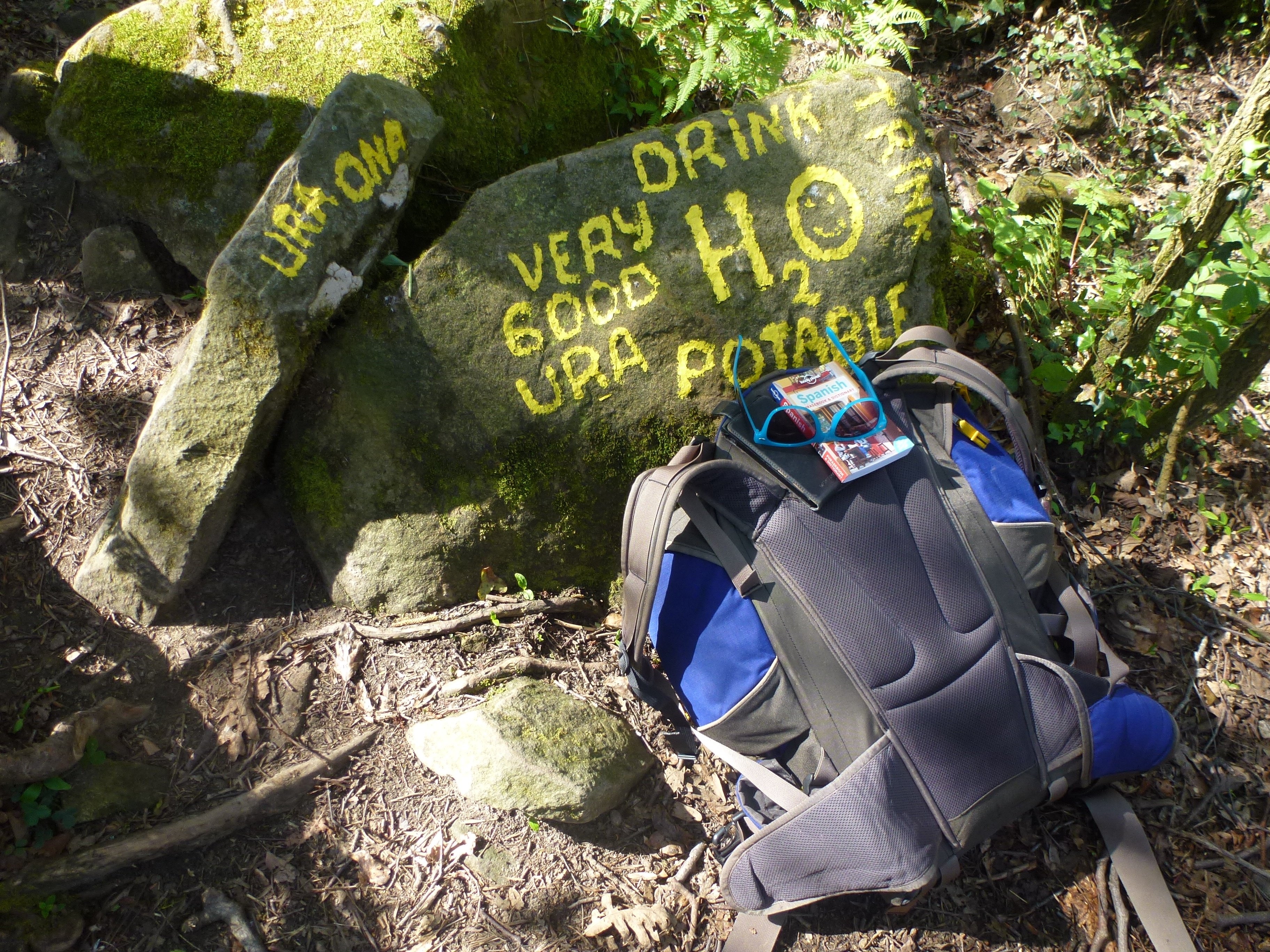 Back in January, I took a few days off to go hiking in Portugal.  Brussels just doesn’t represent as far as things like ‘sun’, ‘ocean’, or ‘hills’ go, and with flights something like 15 euro each way, it was hard to say no.  While I was there and directly after getting somewhat off-trail and then sliding down a giant muddy mountain biking path on my ass, I found myself confronted by a couple from Cornwall, who weirdly had been sailing at the place I used to work at.  The guy explained that he was preparing to walk ‘the Camino’ in Spain in September.  I’d heard vaguely of this before—a couple of people I know have walked it, and Mr France also mentioned that it existed.  I said that I’d love to do something like that, but because of breaking my back twice, carrying equipment wasn’t possible for me.  Cornwall then said that he was only carrying 5-7kg, as there are pilgrim’s hostels (albergues) the whole way—no need to carry camping or cooking equipment!

A few months later I was writing my dissertation and day-dreaming about doing a hike afterwards, and this led pretty quickly to my booking flights to Spain, arranging to borrow a pack, and weeks later I found myself walking over the border between France and Spain.  Not just once, but three times, because I find the idea of walking to another country hysterically funny—not something you’d want to try in Australia!

I wouldn’t describe myself as particularly well prepared for the hike.  I’d found that there was a Camino along the coast, and decided to do 500km of it from Irun to Gijón (Xixón).  I downloaded a free map and some kind of free tourist book, bought an app (Wise Pilgrim) and would later download the Spanish-only Camino app from Eroski—but I didn’t really know what was going on, though given my history, felt competent to deal with whatever arose.

Physically, I’d just spent something like 18 months predominantly on my ass, researching/studying.  So in the three weeks between finishing my dissertation and heading off, I started doing a few hikes—I did about 9 in total, with the longest being 25km from Leuven to Wavre in Belgium.  Of course, there were no hills, and I would be walking a theoretical average of 25km a day on the Camino (it ended up being over 30km a day), but I kind of hoped my body would just deal with it—and I could take rest days if necessary.  I also asked one of the guys from school what I should do nutritionally in order to not completely wreck myself.  But that’s honestly all the preparation I did.  I think it would have been beneficial to do a little more, and definitely a lot more if you’re not used to hiking.  Most of the people I encountered on the Camino were in the 55+ category, and I think I only got away with the non-training I did because of my age.

As far as the equipment I had with me, I borrowed a 35-ish litre pack from a friend’s parents, bought some new trail-running shoes without holes in the soles (and made the switch to Salomon after 8 or so years with North Face shoes), and picked up a bit of equipment.  I took a first aid kit; raincoat for the bag; miniature wind-up torch for emergencies; some zip-lock bags for snacks and chargers (NB: do not take plastic shopping bags with you if you are staying in shared accommodation.  If you do, you deserve to get stabbed.  Don’t freaking do it!  Try using cloth bags instead—I use free bags I’ve been given by various English schools, and they do a great job.  Plastic bags keep people awake/awaken them because they make a hell of a lot of noise, and it’s inconsiderate as fuck.); a microfibre towel; a light sleeping bag (graded for 25 degrees Celsius…which it was not.  Most places had a blanket I could use though, and there was only one night where I ended up sleeping in extra clothing); a set of thermals to use as pjs/wear if it got cold; full waterproofs; a few singlets; a pair of running shorts;  zip-off/convertible hiking trousers; lots of socks of course; toiletries including some biodegradable/enviro-friendly soap which could be used equally for your body, plates or washing; a camera; an off-brand camelpak; a blow-up pillow; and a ‘treat’ in the from of my Kindle.  Over the course of my trip I lost one sock and broke a pair of sunnies (once I got to Madrid!).  Overall, with daily food and a lot of water I was carrying 10-12kg, which felt fine but is theoretically too much.  For the Camino you’re meant to aim for 10% of your body weight.  Had it posed a problem I was willing to shed pretty much everything.  I think it would have been useful to have a pair of sandals and a pillow-case, but otherwise I had everything I needed.

Day 0 was getting from Brussels to Irun.  I booked a flight with Ryanair to Biarritz, over the border in France.  It was only around 20km from Irun however, so I caught a train to Hendaya.  Of course, it wasn’t that easy (is it ever?!).  Inexplicably the train from near my place in Brussels decided not to run, and so I hit immediate panic stations.  The normal airport was shut down after the bombings of course, so I had to get to ‘South Brussels’ airport (Charleroi), which isn’t actually in Brussels at all.  I ended up catching a bus then a metro then a coach to get to the airport.  Security is way up at the airports of course, and this meant that there was a massive queue to get into Charleroi, with every car and every bus passenger being ID’d by military/security staff.  Then once I got off the bus, there was a line with security to get into the airport.  Then inside, I had clear normal security, which was packed and absolutely not moving—it was insanity.  I finally got through, and was running through the airport to my gate with my belt and toiletries in hand as I didn’t have the time to spare to put them back on/away.  I ran down a set of stairs and people got in my way, which somehow precipitated my falling down the stairs while they told me off (pro-tip: if someone is running in an airport, get the fuck out of their way.  It’s like they say, “today, you; tomorrow, me” ;)).  In the end, the only reason I made it only my plane was because it was delayed—I definitely would have missed it otherwise.

I ended up spending far too much time waiting for a bus in Biarritz, and after a few hours (and checking their website, which said nothing), gave up on that.  I headed to the train station instead, whereupon an elderly Frenchman asked what I was doing and where I was going.  I explained that I was doing the Camino del Norte, and he looked surprised, with an exclamation of “toute seule?!”.  Damn straight, by myself!

As mentioned, I arrived in Hendaya and then walked across the France-Spain border a few times, before finding my first albergue.  After a stroll through some nearby wetlands, I went and had ‘meal surprise’, not being able to order in Spanish and being eminently confused by the woman’s French, before preparing to leave in the morning.

My spend on the first day, all in euro of course, was 5 for the albergue, 8.50 for dinner, and 7 in the supermarket—plus travel, of course.  I didn’t record spend on a daily basis, but for me it averaged at about 30 euro.  It varied between about 15 per day all included, to 40 when I had a couple of recovery days in Santander and stayed at a pensión.

I’m going to write a series of posts about this trip, which may take me a little while (mainly because, as usual, I took farrrrrrrr too many photos).  Bear with me!