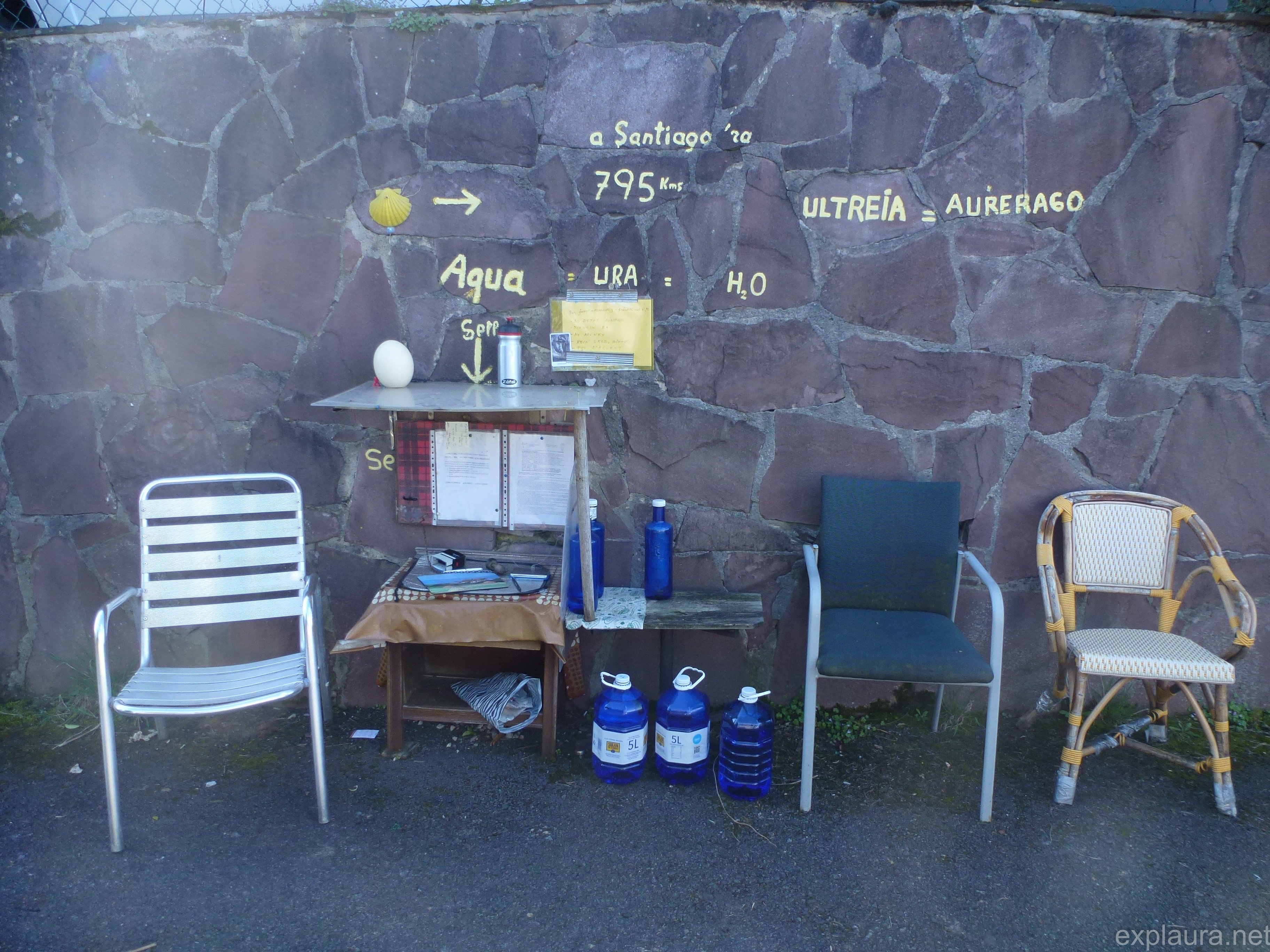 The first morning of the Camino del Norte did not bode well; the weather was exceedingly grumpy, and not afraid to show it.  Nonetheless I set off, following the somewhat random directions given by my GPS, until suddenly I spotted some people on a path near me.  They’d evidently spotted me, too, as the guy yelled out, “Camino?”.  I ran over to join them, at which point he followed up with “Deutschland?”.  He was so excited, too.  But nope.  This guy, Gunter, was an absolute mental case‐something which could be established despite the fact he spoke exclusively German.  That’s how much mental there was.  There was also a petite Japanese girl walking nearby, whom I’d spoken with at breakfast.  That was a strangely momentous breakfast, as it turned out; I met not only Rie, the Japanese girl, but also a Dutch lady by the name of Hennie.  I would bump into Hennie over the next several weeks, and walk with Rie for the next five days.

We lost Gunter pretty quickly, given we couldn’t actually communicate, and I started asking Rie questions about Spanish.  Namely, how I could talk about the shitty weather, because obviously that’s the most important point with which to start learning a language.  I should probably also add that Rie lives in Granada, so does speak Spanish (though I also broke out my very, very, very limited Japanese—any excuse!).

We were so involved in our ‘ducha’ and ‘duchasme’ that we didn’t realise when Rie lost her (not-even-slightly-necessary) hat.  Luckily, a French guy came steaming up from behind half an hour later, holding the cherished hat in his hands.  This guy was, again, a nutter: he was walking 40km every single day.  I mean, that’s a bit of an ask.  This guy was in probably his early to mid 60s, though very fit-looking.  And honestly, I don’t doubt that he did just as he said—you should have seen the pace he set!  He was one of I think four people I met who were doing 40km+ days, the other three being women, and Russian.  They were…rushin’ (I’m not even sorry).

Eventually went through a sweet little town around a river, Pasaia, where we paid the ferryman 80cents to cross.  I felt a bit like I was paying to traverse the River Styx, for some reason.  Perhaps it was the weather.

A grey start to the day

The beach at San Sebastian

Along the foreshore in San Sebastian

Basically I didn’t have much of a clue what I was doing for the day, but Rie broke out a serious amount of paperwork, and plotted which albergues were open, and moreover, where we could stop for coffee.  We somehow accidentally walked past the intended albergue, which to be honest, I was totally okay with.  It would have been on the hill overlooking San Sebastián, and I was already at the point of swearing at hills—no way was I going to check into that albergue, walk down to the city to explore, and then head back up again.  Nope, nope, nope.

As it turned out, the hostel we stayed at was a few km past the city centre, at around the 31km mark from our starting point.  We then walked back into the city to check it out, and moreover, eat some amazing cheesecake at La Vina.  I also bought a Spanish phrasebook, after testing out and verifying that it was pocket-sized by stashing it in my trouser pocket (while declaring to the world that I promised I wasn’t stealing, cross my heart).

Day two was theoretically supposed to be from San Sebastián to Zarautz, though things didn’t turn out that way.  (Oooh, dramatic foreshadowing…!)

First thing in the morning, we had to tackle the hill out of San Sebastián.  It was not fun.  It was not fun at all.  It also started to get quite grey during our ascent, and it mizzled on and off for most of the morning.  Whenever it wasn’t raining however, I broke out my Spanish phrasebook, and started reading the grammar section.

Our destination for the day was Zarautz, with what was a bit of a shorter day than the preceding one.  However, upon reaching Zarautz we found that not only was the albergue closed until high season, but the normal youth hostel was booked out.  We bumped into a group of five who seemed to speak exclusively French, and so passed the message on.  They were a funny bunch.  But anyway, the lady at the youth hostel directed us to carry on to Getaria, another 4km away, where we would find an albergue de peregrinos.

By this point I was getting a little tired, and therefore a little silly.  So when I saw a sign about whales along the waterfront, I decided to start practising my Spanish.  Hence sentences like “quisiera viajar por ballena”, and “quiero comprar dos ballenas”.   Additionally, “esta cafe es necesaria por mi alma”.  (I would like to travel by whale; I want to buy two whales; this coffee is necessary for my soul.)  After a while, Rie just accepted it.

Upon reaching the albergue, which was occupied by only us and another German guy (Gerald), we dressed our various wounds (by which I mean I already had blisters starting to appear in odd places), and then headed out for a huge meal.  I tried to ask the waitress what the Spanish word for ‘mermaid’ was.  I even drew a picture!  But, strangely, to no avail.

Quickly exploring Getaria, we headed back up to the hostel.  When we’d checked in, the lady obviously hadn’t liked me much.  So now I naturally started talking to her about whales, and she just thought I was crazy instead.  A definite improvement!

Rie, smashing out the approach to Zarautz.

Did I wake up in Riven?!

The weather picked up near Getaria.