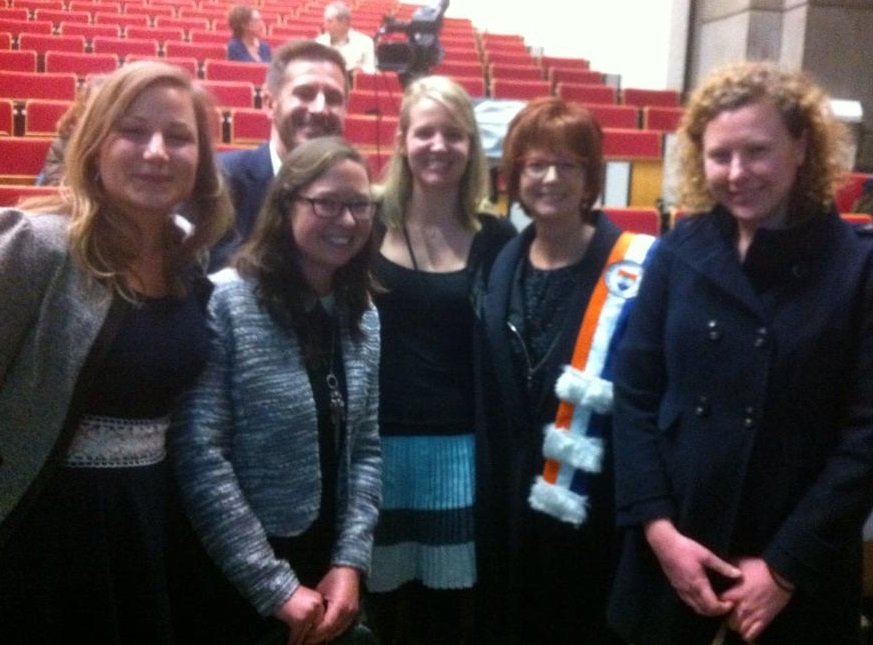 Ohhhhh my.  This afternoon’s lecture resulted in rather more misadventure than I really anticipated.  It all started last week (was it only last week?!) when I had lunch with the head of the Australian Society here in Belgium.  She mentioned the organisation ‘YPFP‘, Young Professionals in Foreign Policy, and suggested I sign up, saying that this would help me in attending a lecture ex-Aus Prime Minister Julia Gillard would be giving the following week.  (Incidentally or otherwise, ‘YPFP’ reminds me of the film ‘YPF’, which is just wholly inappropriate.)

Anyway, one thing led to another—as it often does—and this afternoon I headed over to the VUB campus to see Jules giving a speech about global education for the Kapuscinski Development Lecture series.

So, after drinking a litre of water, I wandered across to the uni in plenty of time.  I got to the venue and decided to take a precautionary bathroom trip, which was fine (thanks for asking) but for the busted hand-dryer.  ‘No matter’, I think to myself, and walk off to find the entrance to the auditorium.  Then, out of the corner of my eye, I see somebody I recognise—sure enough, it’s the girl who runs YPFP in Brussels, who works at the Aus Embassy and whom I had coffee with on Monday.  I figure this must be where to go, and I can see coats hung up behind her.  ‘How fancy’, I think to myself, ‘I get to put my coat away properly!’.

I walk on into the room where YPFP lady is standing.  It’s actually pretty empty, with only 10-12 people.  I can’t figure out what’s going on: is this not the right room?  Are people putting their coats up here then heading into the venue properly somehow?  Either way, I hang up my coat and go to speak with YPFP lady.

This is when things ?start? to go downhill.  YPFP lady introduces me to the other two she’s standing with as the girl who brought minties and redskins (Australian lollies/sweets) for the Aus Embassy.  YPFP lady then introduces them as high-ranking Aus Embassy staff: one of them was the Deputy Ambassador for the Australian Mission to the EU.  EEP.  Thanking me for the lollies, Deputy Ambassador then reaches out to shake my hand—my weirdly damp hand might I add—and the internal mortification begins.  Likewise with the other lady.

The group then goes to join the other 8 or so people at the other end of the room, when suddenly I see red hair, and a terrifying thought dawns on me.  Sure enough, red hair turns around and it’s Julia freaking Gillard and I am clearly crashing the wrong room.  Then, everybody else starts to introduce themselves, and they’re all Embassy staff, Ambassadors, and Vice-Chancellor of the uni.  Oh god.  And I’m like…. “I’m Laura.”  Because I don’t have a cool title.  Though “Laura, who is about to die of mortification” may have been suitable.

People start talking, and I barely—just barely—stop myself from making a facetious comment about Australia now being allowed in Eurovision.  Thank god my usually non-existent filter chose this moment to cut in.  Can you even imagine?!?!

After about ten minutes of this, I saw my chance, and I tried to quietly scurry out of the door.  I was not only dying of humiliation on my own behalf, but on that of YPFP lady—she clearly knew me, and I didn’t want to reflect badly on her with my politician-fiesta-crashing ways.  Oh god.

I couldn’t see Aus Society girl when I made it into the actual venue, so sent her a text.  It then turned out she was sitting a few rows in front and there was room, so given I was sitting in the middle of the row and everyone had the little tables in front of them down, I had to ask everybody to pick up all their stuff, put away their tables and stand up so that I could get past.  Both to exit my row and to enter Aus Society girl’s row.  At least I’m consistently a nightmare?

The lecture was very interesting—I don’t know much about global education initiatives, but did volunteer on the national campaigns team for a development NGO at one time, so there was a fair bit of cross-over.  What was really cool though was that, at the end, the uni gave Julia an honorary doctorate—it was so touching!!

Once people started to file out, Aus Society girl voiced what I’d been wondering—would it be okay to get a selfie with Gillard?  “Let’s do it,” I said.  “After all, I’ve already been awkward in a room with her once tonight, I may as well continue the streak!”  So we headed down to the stage, waited, and jumped on in.  I automatically reached out to hug the people next to me for the photo, meaning I hugged Australia’s ex-goddamn-Prime-Minister!!  Oh Laura.  Is that some kind of protocol breach somewhere, somehow?

It was finally time for the ridiculousness to end (or so I thought), until YPFP girl grabbed Aus Society girl and I at the end and asked us to do a vox-pop about the lecture with a journalist.  She said that we were both “erudite” women, so volunteered us.  And now the two of us are in front of a video camera, for posterity, talking about the lecture.  Thankfully though, for the first time tonight, I wasn’t a socially awkward pile of confusion, and I’ll post a link to the video in the next couple of days.  And then, home time!  Because apparently I need some sleep.  And/or to hide under my doona (duvet/quilt) with my good friend chocolate and never come out again.

In other news, I wrote a guest post on Pure Jonel’s blog last week, and you can now find a link to this and all other guest blog posts/interviews etc under About>Me Elsewhere.