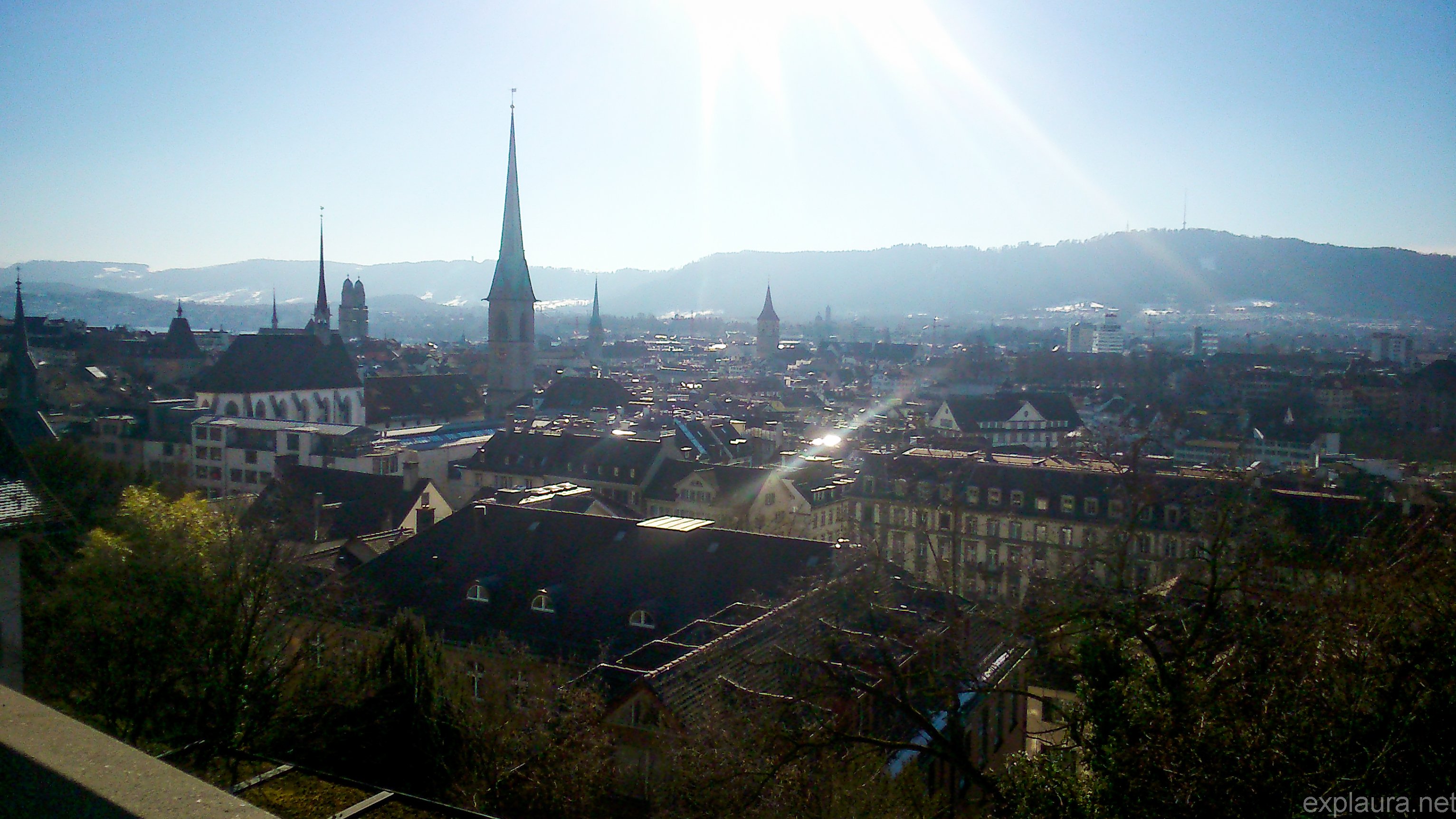 Last time I was in Switzerland, I ended up leaving a ski slope on a stretcher and an ambulance, before being given the all-clear (but still not being able to walk for a few days).  This time I avoided both stretchers and ambulances (result!), but not mountains.  Funnily enough, given it’s a country known for its mountains.

I was off to Zurich to visit Sebastian, who I’d met 18 months previously in Colombia.  We’ve stayed in contact since, but that doesn’t mean it wasn’t weird as hell to actually see him again in real life.  Anyhoo, after an event the preceding night and a grand total of 2.5 hours’ sleep, I got up at a thoroughly ungodly hour and caught the train from Brussels.  On said train, I naturally met a few ‘characters’.  One kid just kept coming and standing in the aisle and staring at me, for really really long periods of time.  Then he got tired of standing up, so sat sideways on the chairs next to mine so that he could continue to stare at me unblinkingly.  Wtf?  This went on for about half an hour, with the average stare being a few minutes long.  Pretty weird kid.  Then at one point I had a cute older Swiss lady sitting next to me, who just straight-up wouldn’t believe I don’t speak German.  Man, she just did not give up!  Though my personal highlight from the train trip (other than being able to see myself moving over countries via Google Maps) was the guard, who in German would wish everyone a ‘good day and bye’, but in English would tell us all to have a ‘nice and funny day’.  How cute is that?!

Coming into Zurich, I realised that it was the first blue sky I’d seen since arriving in Belgium (the clichés are true!), and it was freaking fantastic.  After I disembarked the train I went for a walk up to the uni, which had a view over the city, then sat and read my book in the sunshine.  No jumper required!  Absolutely glorious.

Later that day, after he’d finished work, I met up with Seb, and we went for a stroll through the city.  It really is a very pretty little place—from above, it looks more like a model city than a real one.  It reminded me in a lot of ways of Hobart, but with snowier mountains and more vivid colours.

The initial plan for the Saturday was to go for a hike, but the weather wasn’t particularly amenable to this idea.  Instead we headed out to Technorama, a science museum.  Now, I love science museums.  I remember going to SciTech in Perth Australia when I was 5 years old, and it’s there that the obsession began.  Technorama was a bit different to the science museums I’m used to—its exhibits were clearly arranged and described, and useful for actually teaching.  It was different to say, Questacon in Canberra, or Camera Obscura in Edinburgh: it was focused on learning about science, more than being about the magic of it all (and then figuring things out for yourself).  Haha it begs for the application of national/Germanic stereotypes, to be honest :p.  After a few hours we were pretty much over it, so decided to head home.  Oh god, the traffic.  We ended up in a traffic jam for what felt like (and I’m pretty sure actually was) a couple of hours.  I was dying of exhaustion, but the threat of being continuously poked put any notion of a nap to rest!  Finally, finally we got home, whereupon S cooked some most epic Vietnamese soup.  Nom nom nom.  (Nom nom ‘nam??)

Sunday.  Oh, Sunday.  I woke up feeling the worst I’ve felt in actual years.  What a freaking disaster, and what horrible timing!  I was thereby rendered the world’s most useless house guest, but what can you do.  We headed off to Basel, to theoretically catch the 4am start of Fasnacht.  We had lunch at Seb’s friends’ house (well, eventually—someone forgot to turn the oven on :D), before later on heading to the nearby town of Liestal.  For some at-the-time unknown reason, people were carrying big torches and bonfires through the city, with the fires gradually increasing in size until the flames were reaching a good fifteen metres into the air.  Google has told me it’s a Fasnacht tradition called Chienbäse, and apparently nobody has any idea why the hell it happens.  (Official website; photos on Flickr.)

That night I was supposed to be staying in Basel and going out, while Seb headed back to Zurich to go be a good working boy.  However I was still barely holding it together, and therefore being the most boring and quiet person in the entire world.  Eugh.  Thus despite the loveliness of everybody and their willingness to speak English for me (haha as far as German goes, I can pick out proper nouns and inbetweeny conjunctiony/prepositiony type words—this does not for understanding make!), I went back to Zurich too.

After a lazy start on Monday, and despite the desperate mizzle outside, I decided I’d go for a bit of a hike.  The target was the Uetliberg, a hill out the back of Seb’s place.  And so I did, traipsing up the slippery snow in the rain, umbrella firmly in hand, and variously singing and conducting my way through the forest.  (Hey, who can not conduct to Bach’s Fugue in G Minor?)  Soon enough I reached the train station at the top, took a few photos, and headed back down to town.

When I got there, I went to the supermarket.  Haha I’ve just realised that I talk about supermarkets enough to justify them becoming a tag on my blog.  Yup, that’s happened.  Anyway, while I haven’t yet written about it, supermarkets here in Belgium make absolutely no sense.  I simply cannot get my head around Francophonic organisational logic (or lack thereof).  And I’m blaming Francophones, because apparently keeping pine-nuts in the fridge makes perfect sense to both French Belgians and actual French people.  Not German Switzerland, though.  Everything was so organised and easy to find!  It made me really outrageously happy.  Though I’ve discovered one can’t buy icing sugar in Belgium, nor self-raising flour in Switzerland.  Obviously, baking is becoming an international activity.

Anyhoo, after my inspirationally logical supermarket adventure, it was time to bake cookies while studying, before making dinner.  Procrastination skills: 10/10.  Of course, at about this time Seb informed me that the photos I’d taken from the ‘top’ of Uetliberg weren’t actually from the top at all—somehow I didn’t notice the fact that I hadn’t actually finished walking up the hill.  What the hell?!  Fail, Laura.  Fail.

Tuesday was travelling-back-to-Belgium day, but I had Unfinished Business.  Namely that goddamn ‘mountain’.  Was I going to let another Swiss mountain beat me?  I thought not!  So, being a little short on time, I caught the train up to the not-top, and made it to the actual top:

Result!  Of course, it turned out that the preceding day’s rain had turned everything to sheet ice, so my plan to walk back down the hill would have quickly resulted in broken bones.  As such, I caught the train back down (:() then quickly threw everything into my bag before heading to Zurich HB.  I was to catch the train back to Basel, from whence I was flying to Brussels.  However, while on the train I looked at the airport bus timetable S had printed out for me, only to be wildly confused.  I mean firstly, I had no idea that the airport was technically in France, so that was a bit of a surprise.  Secondly, the timetable said that the stops were “EuroAirport Cargo, EuroAirport Abflug CH, AuroAirport Verwaltung, EuroAirport Ankunft CH”—which the hell was I getting off at?!  Obviously not ‘cargo’, but as to the rest?

Scratching my head, I tried to rouse my poor sleep-deprived brain.  Then suddenly I remembered seeing a sign in a store which had lollies ‘Ab’ 1CHF, which in the context obviously meant ‘from’.  Then I recalled seeing ‘flug’ both in Dusseldorf airport the other month and in the train station in Zurich, where it clearly meant ‘flight’ or something close enough.  Boom!  Abflug=departures!!  Hmm I probably could have just asked somebody, but let’s not get too crazy.

Soon enough I was in the airport then back in Brussels (and might I note that I have now crossed several European state borders, and never had my passport checked?!), where I escorted some poor lost Frenchman into the city to his hotel, then thankfully home to bed.

In other news, I’ve written another guest review for The Piece of Shit Book Club.  And in other other news, I’ve just found out that my book Pickles and Ponies is a finalist in the Wishing Shelf Book Awards.  How crazy!  (So basically I’m saying you should all buy it, and thereby fund my adventuring career ;)).