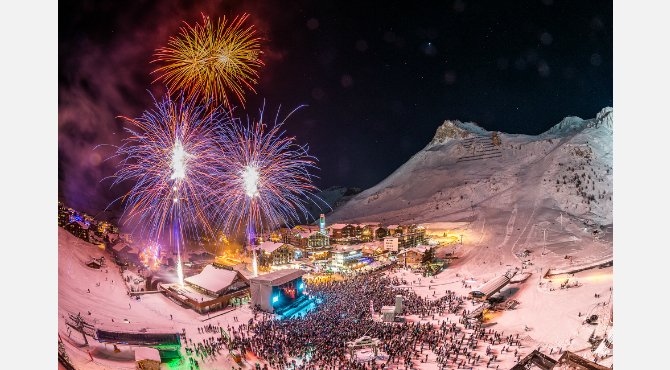 Outside right now, the sun is setting over the French Alps, and it is absolutely beautiful.  I’m not quite sure if words really capture it: the light is orange, contrasting with the deep blue of shadows.  There are steep slopes all around, covered in coniferous trees which are themselves coated in snow.  The tops of the mountains are jagged, and it’s honestly like each of them has a personality: each mount facing the other in a wordless battle for supremacy.  It’s not bad, is what I’m saying.

I arrived in Bourg St-Maurice at 9pm last night, and Wicklund came to pick me up from the station.  We then went back to his house, where I met Si, Lewis, and Tom, and also Ros, who I apparently previously met at Selva a few years ago.  We later on met up with more people, including another guy I met at Selva val Gardena/Wolkenstein in ’12, but I’m getting ahead of myself.

After a quick pause to re-humanise, we left to make the drive up to Tignes.  I walked outside to the van we were taking up, saw the door to the rear compartment open and full of doonas/duvets, and hopped straight on in.  “Oh, aren’t you getting in the front?” asked the rather confused Wicklund.  “Are you kidding?” I replied—after all, I was now in a donnamobile!  Tom and Lewis also piled into the back, with the other three on the seat in front.  I laid down and was the snuggest person in the world, but after about fifteen minutes of the trip, decided that maybe having a seat and not being car-sick would be a better idea.  Also, it was the first time I’ve ever worn a hat with ears, and I felt like a complete tool, but an incredibly snug one.

We got up to the resort a short while before eleven, and headed for the stage.  It was a beautiful night for it—not too cold, with a clear sky, a bright moon, and the stars shining on the snow.  There was a big stage set up with some Cirque du Soleil performers.  Everybody else was really disappointed, actually: the previous year it had been a right mess, with 15,000 people off their faces, DJs, and just an epic party.  Apparently it was a little too out of control for the resort owners though, so they made last night’s event very much family-friendly.  After the circus finished at midnight and the fireworks ended, the whole thing was over.  There were kids in the audience!!  Even infants!!  As Wicklund said, it was cool and everything, but it was more of a Tuesday night thing than a Wednesday night thing (anyone who’s done snow seasons will understand ;)).

Afterward we went to a couple of bars.  I was determined to stick to someone in the party so I didn’t get stranded up the hill (this time?), so went dancing with Ros in Loop Bar (where my friend Sid works, but I totally forgot about that!).  Then it was off to another venue where we completely failed to get in.  Not that it stopped Wicklund from trying for an hour or so.  We also met up with Gaz (from Selva), who I swear to you, sounds exactly like Austin Powers.  Kind of acts like him, too.

W had a bit of a moment with us all standing around: this looks like his last season, and those of us there represented so many of them.  I was from his first season in 2008, then the others covered Selva and now France, so it was 7 years of seasonnaires he’s met.  It was pretty adorable.

Poor Tom by this point was in a right state.  He spent a lot of the final hour or so holding up walls, somehow managing to be seemingly asleep while propped up against them.  As far as him walking goes, I now truly understand the definition of ‘careering’.  I helped him walk to the van, then Si drove us all back down to Bourg, he and Lewis giving a bit of a tour on the way down.

Arriving back at the house, Wicklund and Tom were verrrrry sick so went off to bed, while Lewis ate lentils and I made a 4am salad.  Nom!  Then it was off to my little bed under the eaves, and a thoroughly-deserved sleep.

Today has been an organise-y day, as I’ve been writing (obviously), booking my train to and my hostel in Brussels.  I’m heading there on the 7th—and in the interim, five days of riding 😀  Kindly cross your fingers that I don’t injure myself.  🙂