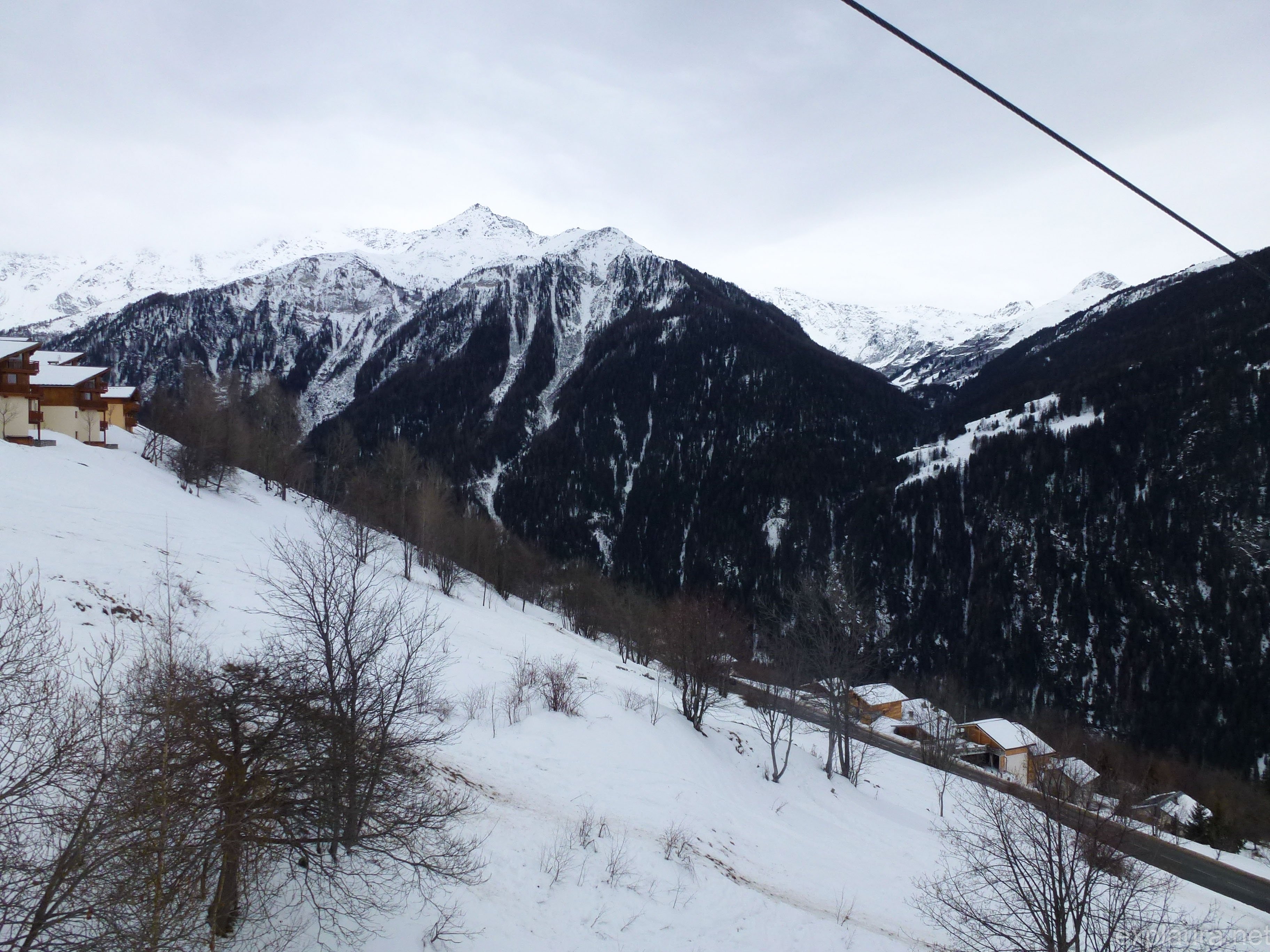 After my brilliant first day’s riding, things went down-hill—and not in the awesome way!  Waking up after the previous day’s efforts, I was exhausted and hurt all over.  Nevertheless, I was determined to make myself go riding.  Lewis drove me up to La Plagne, and I hopped on the lift.  La Plagne was significantly icier and grosser than Les Arcs had been, and I really was too exhausted to be taking on something which requires balance (actually, my abs are still sore from riding on the 2nd—and it’s the freaking 10th as I’m writing this!).  I caught my heel edge and fell about ten minutes in, literally on my first slope of the day, and smacked my head hard.  Lots of skiiers stopped to ask “ça va”, but after taking a minute to hold onto consciousness, I waved them onward.

I now had The Fear, the blight of snowboarders everywhere!  And it was awful.  It makes you ride so badly, making you fall over and hurt yourself more—it becomes self-perpetuating.  I had a hot chocolate and an éclair and checked that my pupils were the same size in the mirror (I’ve had a lot of head injuries), and really just wanted to go home.  But how the hell was I to get there?  The only feasible way was to traverse across to Les Arcs and catch the funiculaire (train thing) down from there, so feeling thoroughly miserable, I started it.  It was not a good time, I was pretty dizzy/shaky and scared.  Sigh.  If I’d just accepted that my body has limitations that even stubbornness can’t countervail, I wouldn’t have been in this situation!

In the end I got to Les Arcs—at least to one side of it—and asked a lifty where the free shuttle bus left from.  No dice: they didn’t run in the middle of the day!  Feeling just awful, I trundled through the town (Peisey-Vallandry) until I aspied an information office.  Surely they’d know a way down?  But alas, still nothing until at least 4pm or so: hours in the future.  I could, not, even.  I sat down glumly, looking at a map to try and figure if I could get somewhere easier.  Then I went ‘screw this’, and with a spirit of determination, went back up to the info guy.

“Is it illegal to hitch-hike in France?” I asked, to his expression of surprise.

“Illegal?  Why would it be illegal?  Actually it is very good here.”

Clearly it was hitching time, and ten minutes later I managed to get a ride with an English chap, the whole way back to Wicklund’s house.

The next morning I woke up feeling thoroughly ill, and having to clutch onto the sides of my bed, even lying down.  Dizziness level = extreme.  Hmmm, maybe I gave myself more of a head injury than I thought??  In the end I had to spend the day horizontal, so I used it to look for accommodation in Brussels.

The next day was more of the same, with me feeling better but still wobbly.  The guys went riding, but I decided that wouldn’t be a very sensible choice, so I went for a few hours’ wander through the town and spent the rest of the time horizontal again.  Woot!  Knows how to holiday?  /sarcasm.  That night I finally cooked dinner: the boys had been feeding me the entire time.  What legends, right?  Put me up, drive me around, give me food—they even made me a vegetarian option every night specially.  LEGENDS!!!

The next day would be my final opportunity to go riding before heading off to Brussels, and I was determined to do so.  It’s a rule I have: if I seriously injure myself on a trip, then I have to go riding again before I leave, so that that wasn’t the last thing that happened.  So I hitched up to Tignes for a half-day ticket (still too woozy for a full day, not to mention still aching—still!), and I hired a helmet.  Eugh.  To be honest, it was a mountain of ice, and it was *not* a good time as far as snowboarding goes.  Between my exhaustion, wooziness, and trepidation, I was riding like a punter’s girlfriend.  It was shit.  Seriously, the return from the top of the hill was red run only (Europe: green, blue, red, black—so this was only an intermediate run.  Dammit, I used to warm up on the blacks!), and I was miserable the entire time.  I took it slowly, but I was seriously doubting I’d make it.  If there had been another way down, I probably would have taken it.  Instead, I rode however many kilometres down and just resented it.  And railed internally over why I did this sport.  Eugh.  But I made it, which I guess is the point.

After ‘riding’, I went to Loop Bar to visit Sid.  Sid is a guy I met when I was living in a hostel in Northern Beaches Sydney for a couple of months.  I overheard the following conversation between him and a girl:

While she was horrified, I started laughing and went over to speak with him.  We could be friends haha!  In the end it turned out he was going to be in Tassie when I was there, so I gave him my number and said I’d show him around.  I ended up spending a day with him, his brother and their friend: I picked them up in Devonport then took them hiking at Cradle Mountain, and fed them a chocolate cake I baked.  It was pretty fun!

Anyway due to the chocolate cake, the friend wanted a recipe so had my email address.  I can’t remember why, but he popped into my head a couple of years ago, so I asked him for Sid and his bro’s facebooks, and I’ve been in touch with them again since.  So yes!  We caught up.

Of course, by now it was getting dark and there was no way back to Bourg St-Maurice.  I caught a shuttle as far as I could down, then tried to hitch.  No dice, and there really wasn’t anywhere good for cars to stop.  So still in all of my gear I tramped across an epic big dam, about as far as I could safely go (there weren’t footpaths).  I then spent another ~half hour standing in a pile of snow, my thumb out, and now pitch black.  One guy stopped, but he was going the wrong way.  I wasn’t quite sure if it was going to work, but had the feeling everything was going to be okay.  Finally, I picked up my phone and started texting Wicklund to see if he’d drive up and pick me up (around half an hour each way), when a big-ass truck pulled out of a nearby yard and started toward me.  Tell you what, I’m pretty sure my smile when they stopped lit up the night: I was pretty happy!  The guy, like my lift earlier that day, only spoke French.  So I told him I was happy and that I loved him.  Haha.  Face-palm.

That was pretty much it, really: that night it was just Wicklund and I, as Lewis, Tom and Tom’s bro were up at Les Arcs that evening.  So we chilled and ate, and then a solid night’s sleep before the next day, when I would head to my new home country.