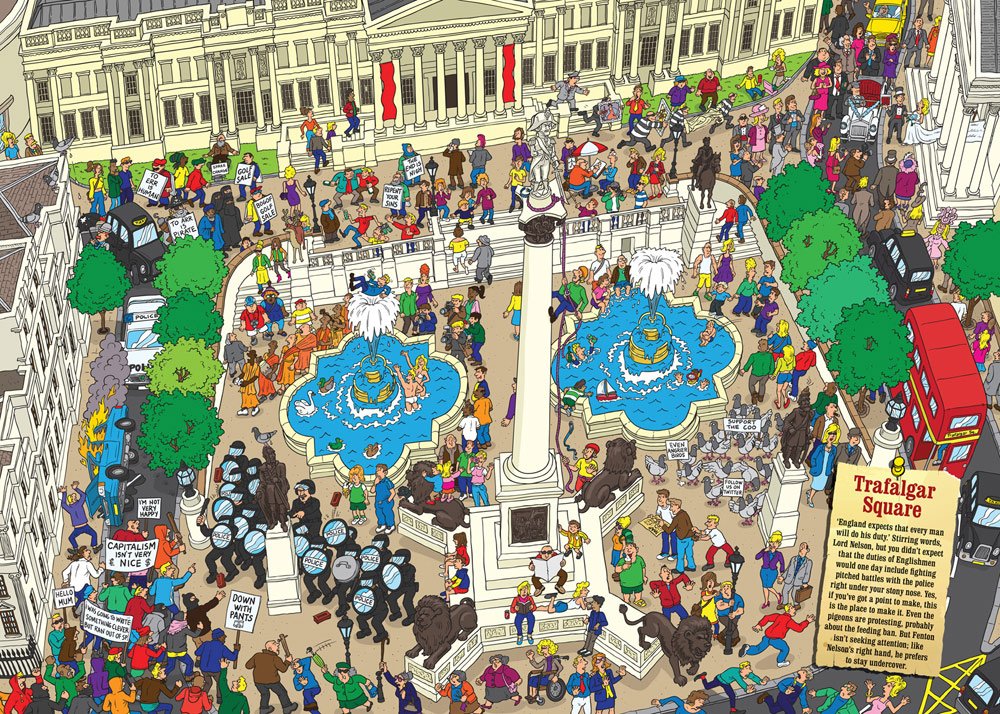 After making the notes for yesterday’s post, I went and met up with Kiwi Craig. I really wanted to go to my favourite pasta place in London – I went and had an amazing pumpkin ravioli with walnut sauce before getting my tattoo last year, and keep trying to go back. I say ‘trying’, because whenever I make it there, either that pasta’s run out, or they’re closed. Sadly the latter was again the case on this particular occasion, but being in the mood for pasta, the quest continued.

In the end we had lunch in a trattoria, before I sprang my latest quest/adventure on Craig.  You see, I went to Oz Comic Con this year dressed as Wanda from Where’s Wally/Where’s Waldo, and it was all to a purpose: I wanted the outfit in order to do a real life ‘Where’s Wally’ all around Europe, and this was the start of my mission! Craig was keen to help out, so we went to a couple of the tourist destinations in London, whereupon I’d quickly rip off my coat and he’d take photos before I froze. (It was only around 0, so it wasn’t actually that bad.) The reactions of people going past were pretty hilarious – quite a few people asked if I was Wally, and others would cast their eyes at me then laugh to themselves. It was pretty great! I did of course have a couple of “found you!”s. Imagine if I had the *full* costume on, given that just the hat and top were enough for this!

Craig then went off to meet with one of his other friends, and I went shopping. Because clearly I don’t have enough baggage to take around with me (!?!). I ended up in dire need of a break, and ended up in McDonalds after I failed to find anything reasonable close enough. So I sat down with my icecream (I don’t understand weather) and my phone, and abused the wireless. I must have been having a great hair day yesterday or something, because a *lot*, repeat *lot* of guys were coming up to me. I ended up chatting with a nice guy from Mauritius for quite some time, who as it turned out, had lived in St Petersburg. What are the odds, right?

I then went back to Tom’s (he wasn’t actually staying there that night, somewhat hilariously) and had a good chat with his housemate Kayleigh before hitting the sack.

This morning I ran a few errands – easy enough given Tom’s is 25 minutes from his door to Tottenham Court Road station – then whooshed back to the apartment in order to procure myself another ride with uber ;). The car was supposedly arriving in 15 minutes so I thought I had heaps of time – four minutes later it was there! Fastest I’ve ever packed in my life, I swear.

Getting to and on the Eurostar was fairly easy – apart from my near-swooning at the beautiful French men that I found myself speaking to – and the trip to Paris Gare du Nord was uneventful. It was only when I actually arrived that things got Laura’d.

To continue my journey to Bourg St-Maurice, I now had to change from Gare du Nord to Gare de Lyon. Oh god. Oh my god. I had one hour and one minute to make it, which is fairly reasonable if you know what you’re doing. I, on the other hand, did not have any *idea* what I was doing!

I disembarked and headed for where I could see an information booth. I asked the guy if he spoke English and he said no, so I broke out some “comment aller au…”. He gave me a subway map, said downstairs, and four-something. Figuring that this would mean the metro, I thought I might need cash for a ticket, so I lined up for a cash machine. That line was just *outrageously* long, but I got some euros, so result.

I next headed downstairs. The escalator was broken so it was thunk-thunk-thunk the whole way down. I found a ticket machine and it let me use English, though I had no freaking idea which ticket I was supposed to choose, so mulled over that for a while. I eventually bought one and tried to figure out where the hell to go next – there were so many different forms of public transport, numbers and colours everywhere, and I had not a clue what was going on. I was walking briskly around, looking for someone who looked like they worked there, and finally found a security guard who told me platform 44 downstairs. Downstairs I went, a little concerned that I was going to have to go upstairs at some point later on (dramatic foreshadowing?).

I found the platform and saw that, sure enough, there was a train in ten minutes. Did I mention it was now 15:18 and my train was leaving de Lyon at 15:48? No? I had no idea how far it was, so was really hoping for the best.

The train got into Gare du Nord at 15:28 and it was a freaking *struggle*. Really – it was a heaving mass of poeple. I was actually pretty appalled at the overcrowding, given it’s a developed country. Wtf, France? Some nice gentleman helped me with one of my bags (happily I’ve had at least one nice gentleman/lady at every single point so far, from Sydney Airport to trains to cabs to the various metros and trains of the world). It was honestly freaking ridiculous though.

One stop down, and then we were drawing into the next station, which was Gare de Lyon – but I couldn’t get off the fucking train!! There were so many people piling on and pushing me over and piling off that I couldn’t make headway. My “s’il vous plait”s and “excusez-moi”s were completely ignored. In the end I went ‘to hell with this’ and just started reversing toward the door, dragging my stuff with me, and to hell with anybody that got in my way.

Phew, so I was at de Lyon – but now where?! I was still in the subway! I chose an arbitrary direction, noting as I did so that it was 15:37. Eleven minutes to make it. Merde. I could see a sign for ‘other lines’, so opted for that and hoped for the best. Then disaster struck (again!). I couldn’t get my freaking baggage through the baggage hatch, and it was jammed halfway in and halfway out of the subway gates! A nice Frenchman in his late 30s saw me sitting there heaving and swearing volubly to myself in Russian (my brain went ‘ooh, other language spoken here’ and started producing Russian rather than French). He came on over and started heaving right along with me, talking at me in French, and me just going “aaaaaagh боже мой, je ne comprends pas!!!”. In the end it just wasn’t going, so he used his pass to go back to the other side so that he was pushing and I was pulling. No dice, so he pulled my bag out and took it through the ordinary gates. He asked if I was Russian – points for knowing what language I was ranting to myself in, right?

I knew that I could now only have 5-6 minutes to make the train, and had no idea where I was going. So I looked at him, looked pathetic, and offered him my train ticket. Yup. I pulled a full ‘maiden in distress’. He looked at my ticket, looked at the time on my ticket, looked at his watch, and his face blanched. He then grabbed my snowboard bag and told me to go with him, and we both started near-running through the station. Holy shit. What an absolute hero!!! We made it up to the platform and to my train with one minute to spare. He handed my bag over to me and all I could do was clutch my heart and say merci. I even got the ‘very much’ part wrong – I need some serious freaking revision.

Seriously though. I think my adrenalin is still going, half an hour later. Happily I don’t have to change trains after this though, as the one I’m on now takes me the whole way through to Bourg St-Maurice, where Wicklund is picking me up from the station before a night out for New Year’s Eve. Man, (head in hand), it has been a *big* year.