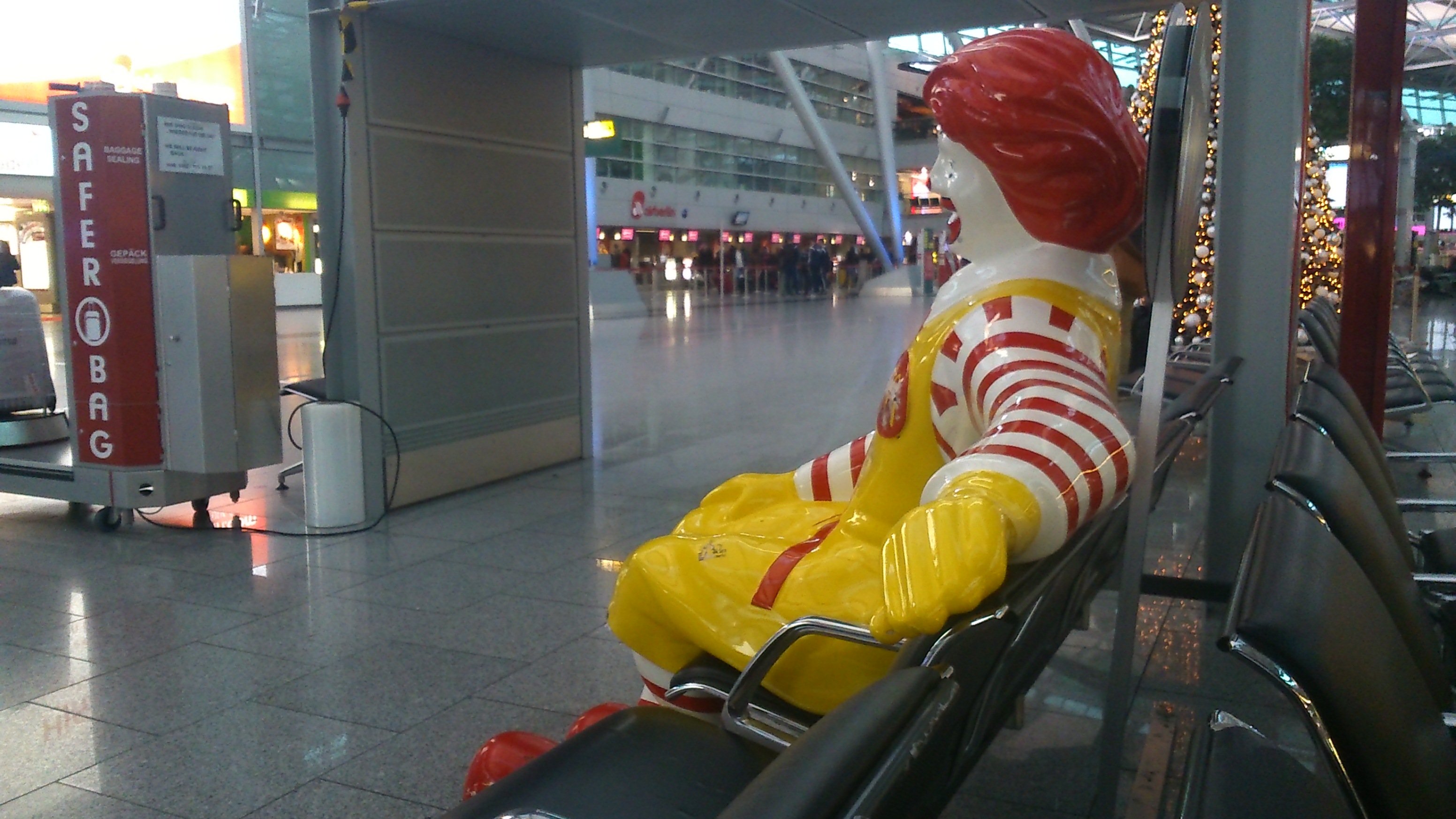 I am extremely in Germany right now, and I have so many questions.  For example, what does ‘oder’ mean?  Secondly, there is a gigantic Ronald McDonald plastic monstrosity sitting on the chair behind me which keeps creeping me out, yet people keep coming to have their photo taken with it.  Why?  Why?!  I am too tired for creepy yellow clowns.  Then again, I think I probably always am.

I don’t really understand how I ever actually manage to make any of my flights.  It’s just ridiculous.  I mean this time, I thought I was ready–I really thought I was ready–but here I was, 25 minutes after I was supposed to leave for the train, still throwing stuff out and putting random assortments of things in bags.  I ended up just scooping the remaining items into a bag I had handy, and booking it for the train station.

This time I’d looked at my flight time the night before, so at least I knew what time I was leaving.  I didn’t bother checking when I needed to be there though, because I am an idiot.  So I was having a look at this while on the train into the city, therefore not realising I’d actually reached Central until the “next stop, Town Hall, followed by Wynyard, then all stations to, North Sydney, then all stations to, Chatswood, then all stations to, Hornsby” announcement came on.  This led to my quickly jumping out with my vast array of gear, breaking a nail in the process and also dropping my stress ball onto the train lines.  Now, this stress ball was bright yellow with a big smiley face on it, and my tax driver to the airport in Bogota gave it to me after I knew the local word for ‘awesome’.  So if anyone happens to see it at the southern end of Central platform 16 over the next few days, feel free to break the law and grab it for me 😉

Making it to the airport, it was time to weigh things and continue repacking.  I figured I had to be around 15kg over.  But what do you know?–the scales were broken.  Given that I was now tight on time, I decided just to check in and ask them how much I had to throw out.  Happily, thanks to Etihad being awesome, and moreover the lady on check-in being my hero, they let me travel with all of it 😀  (In the end, it was only 8–9kg over).

There was a really nice guy going through security, who had a look at my coat (breaking news–yet another group of people has stopped to have a photo with el creepo McDonaldso!  And now some lady is trying to sell me Christmas goodies, and does not seem overly convinced that I am not in fact German and do not in fact understand the bulk of what she’s saying to me.).  He laughed at how massive it was and asked whether I was going to “Russia or the North Pole?”.  Little did he know that I had meta-coat going on, stuffing one inside the other so that I could smuggle them through in carry-on.  My baggage allowance was out, and coats are heavy, okay?!

The flight itself was fairly uneventful: Sydney to Abu Dhabi (gosh I’ve spent a lot of time at that airport), then Abu Dhabi to Düsseldorf, where I’m sitting at the moment.  I did however get a bit overly experimental with the game of “what goes in Laura’s mouth?” on the way over: there was an extremely mysterious package in the food bag thing.  I opened it carefully and it smelled really good.  I figured ‘oh, hey, hand sanitiser’ and poured some onto my hands.  Then it smelled so good that I started to figure that maybe it was dressing or vinaigrette or something instead.  Coming to this conclusion, I carefully put some in my mouth to check.  Nope, it was definitely hand sanitiser.  And in case anyone’s wondering, it does not, repeat does not, taste good.

So now here I am, (oh shit, I can see a police officer on a segueway whats-it called machine, and it looks freaking ridiculous!) waiting to check in to my flight to Manchester, where Tilly will pick me up to take me back to Liverpool.

Man do I need a nap.