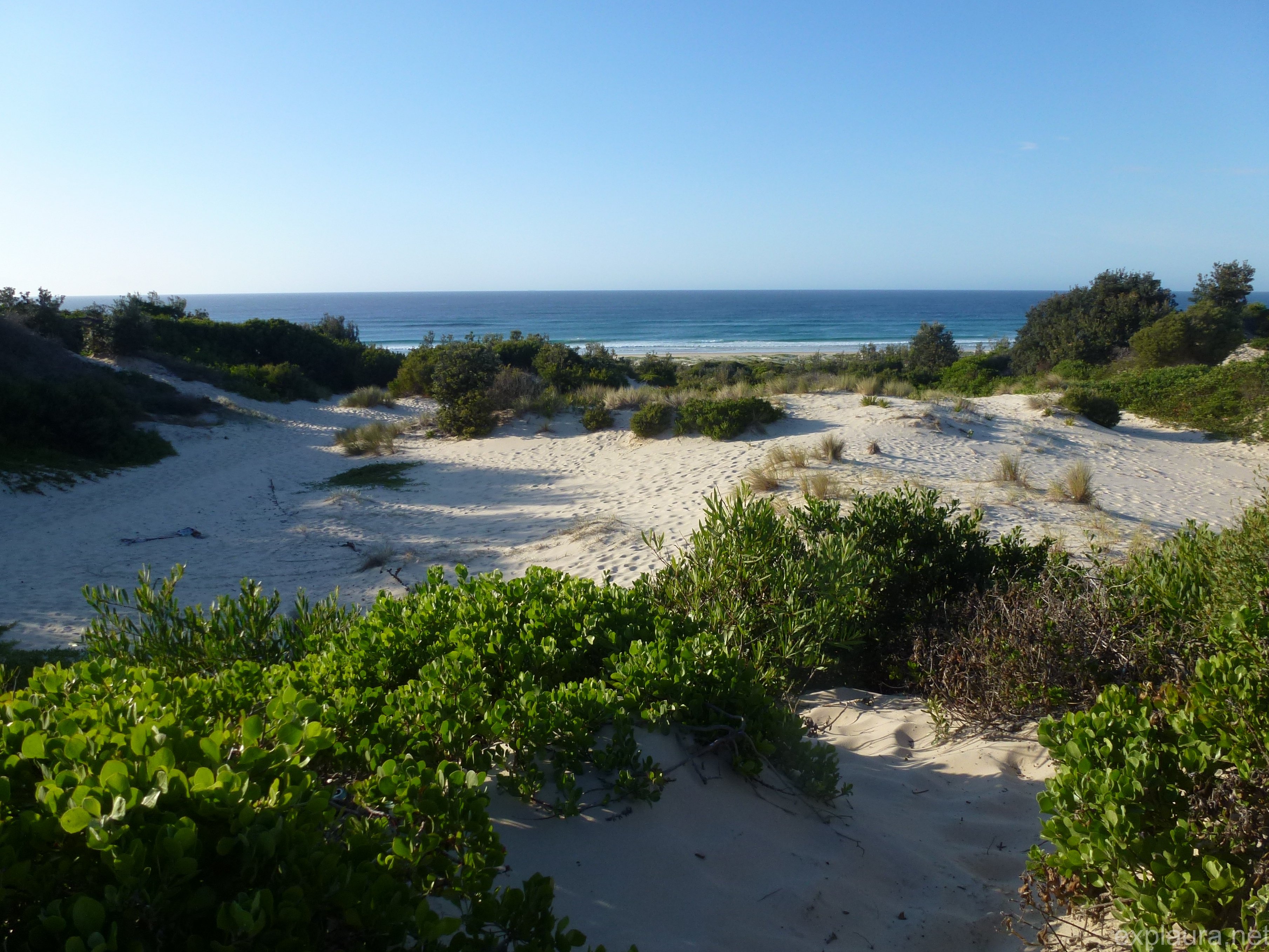 Every time I’m due to leave Australia, I start my goodbyes at least six months prior to departure, as there are so many epic adventures to be had!  This past weekend was one such weekend, and it saw me, JFord and Dasha missioning up to the north coast for some camping, cider, sand and sun.

JFord picked up a hire car in Canberra, then collected Dasha and I up in Penrith in order to bypass the city.  We went to a mall, where my mission was to get cider while the other two made sensible food choices.  Of course, being the broken specimen that I am, I’m pretty much only able to carry one six-pack at a time, and with all the choices it made for quite a lengthy task.  The fact that I’d go into the supermarket to find my friends after every two six-packs surely had the guy behind the counter thinking I was buying for underage people or something haha.

The drive up to ‘Treachery Rocks’ (which was neither rocky nor treacherous) was fairly epic.  We arrived just before midnight, a long drive, several unsurfaced roads and quite some pot-holes later.  We were however there well after closing time, and so there we were, middle of the night, searching poles and rocks using lights on our phones in order to find the key to the gate’s padlock.  Eventually JFord was victorious, and we made our way into the rabbit warren that was the camp site.

Now, we were expecting somewhere out of the way, with maybe only a few camp-sites and sparse people.  Instead we found a heaving morass of tents, with probably 800-900 people, and freaking nowhere to site our tent.  We ended up settling for just by the barbecue hut, next to some very funky-smelling bushes.  Ew, biology.  Either way, we were finally all set up and kicking back with some ciders when we had some unexpected visitors.

Sigh.  Before I tell the story, I should probably mention that it was well past my bed-time, I was verging on giggly-tired hysterics, and the epic size of Rekorderligs was going straight to my head.  Add three freaking blind drunk teenagers to the situation, and things were going to end up with me Giving Tone.

“Do you have any mixer?” asked our visitors, after an ineffectual knock on the tent wall.  “Um, no,” we replied.  “Yeah, of course you have some mixer, you’re having a party!” they tried to argue back (16/17 year olds).  “No, we don’t usually drink cider with mixer,” I answered.

At this, the boys retreated for a brief moment, pausing to regroup.  Then comes a wheedling voice at the door: “Hey, Margaret Thatcher?”

“The former New Right Prime Minister of the UK?” I ask.  “Because she’s not here.”  Dasha and JFord, meanwhile, have opted for silent and continual hysterics.

“Aww,” replied one of the confused and deflated young men, who had now entered our tent and was propped up with his face smushed against the fly-screen.  “Why are you so mean?  Why don’t you want to talk to us?”

“Well to be honest,” I replied, “you’re drunk, annoying, and kind of boring.”

Outside the tent, I can hear his slightly-more-sober friend start cracking up.  “He is kind of boring!” he announced, then continuing in an aside to his mate: “I think I love her.”

Enough was enough though, and these guys weren’t freaking leaving.  I decided it was time to take action, so stood up and made to unzip the fly door.  “Time to evacuate?” asked JFord, following me.  “Yup!”

Stepping over the guy sprawled in the annex-y area, JFord went for his ankles to start dragging him, and I picked up the bottle of JD on the ground.  I wasn’t that keen on any kind of physical contact with these idiots, so instead walked to a few metres away from the tent and unscrewed the lid.

“I have your alcohol,” I said, giving All The Tone, “And I am going to pour it onto the ground unless you get the fuck out of our tent!”

“Get your friend out of our tent!” I ordered.

Sprawled-guy, now dragged most of the way out of our tent by JFord, came stumbling up, crashing into me.  “Nooo,” he said, whining.  “Don’t do that, don’t pour it out!”  I pushed him back off me and started tipping.  This carried on until they agreed to leave.

Shortly later, their friends came to apologise.  JFord and Dasha went off to clean their teeth while I stayed with the tent, and they freaking came back again.  I was *not* pleasant.  It was the last time they came back.  Haha as Jess said, once I start Giving Tone, it’s time to get out haha :p

At this point Dasha taught me a new saying in Russian: на новым месте, приснись жених навесте (na novym mectje, prisnys’ zhenikh havestje) – essentially, that when you’re in a new place, you’ll dream of your future husband ;).  I mainly dreamed about assembling flat-packed furniture, so I’m not totally sure what that says about me.

In the end, we had a fairly restful albeit short night until facing an onslaught of dinosaurs in the early morning.  By which I mean little kids yelling that they were dinosaurs and going to eat each other, and chasing each other around the barbecue.  It was pretty hilarious tbh.

We were determined not to spend another night in the funky-smelling noisy spot, so after a stellar breakfast, set out along the various tracks in the camp-site, only to find them all full (or wayyyyy too far away).  As we were about to give up and leave the park for a different one despite pre-paying, I asked our driver JFord “what about there?”  We backed up, and sure enough, in JFord’s words it was freaking perfect.  “You’d really think I’d be better at Where’s Wally,” I said.

Once set up, we headed straight for the beach, which was freaking epic.  Lots of sun-baking, lots of jumping in waves, lots of spraining my freaking ankle at one point when I was dragged under the waves.

Starting to burn, it was an afternoon of naps.  Then, realising I was pretty much incapable of walking, JFord went to buy me some ice, and I finally got onto some first aid for my munted ankle.  We had one of the camp rangers turn up, and I swear, it was this dude:

He told us that if anyone bothered us, call him and he’d “spoil their fun”.  It was honestly totally hard-core.  Haha thinking on it now though, we were the only group of girls by ourselves: there were a few young families, a few groups of friends, but mostly big groups of surfer bros who were there for the break.

Speaking of sausages, we drove to the barbecue (seriously—my ankle was fucked), and there some nice VB-drinking coast-type man did all of our cooking for us.  What a winner!

The night finished with Dasha and JFord discussing my romantic prospects, as you do.  Dasha was recounting the virtues of some ‘adventurous’-type men she knew back in Kiwiland, to which Jess interjected “yeah, but do they also have an MBA?!”  Haha realising I only like really, really smart guys, Dasha then started telling us about one of her guy friends who is a rock-climber and currently undertaking his Masters in Engineering.  “Engineering, hey?” I asked.  “I do like practical men.  How’s he feel about moving to Belgium?”  “And sleeping on the floor?” added Jess.  Haha oh dear. Dasha didn’t seem to think he’d be into it :p

Jess, me and Dasha.

In the morning I again woke up just before day break, and went for a hobbling wander to the beach to take in the light on the surf.  Some surfer bro (in the pic above) made small talk, then I cruised back to the tent to read.  We decided to take a staged approach to the day, looking for some calmer waters to swim in.  After some incredible tetris-packing of the car by JFord, we were on the road once more.

Our first stop was Newcastle for an idyllic lunch spot on the coast.  Then we drove down to Caves Beach, an hour and a half further south, and got some more sunshine—well, the others did.  I covered up my sunburn with a towel and sarong, meaning that only my face was actually exposed.  We went for a few lovely swims, though, leaving the beach just as the weather started to close in.

It was such a great weekend!  Awesome places, awesome company, and some truly delicious cider (Winter Rekorderlig, I’m looking at you ;)).  How good is summer?!