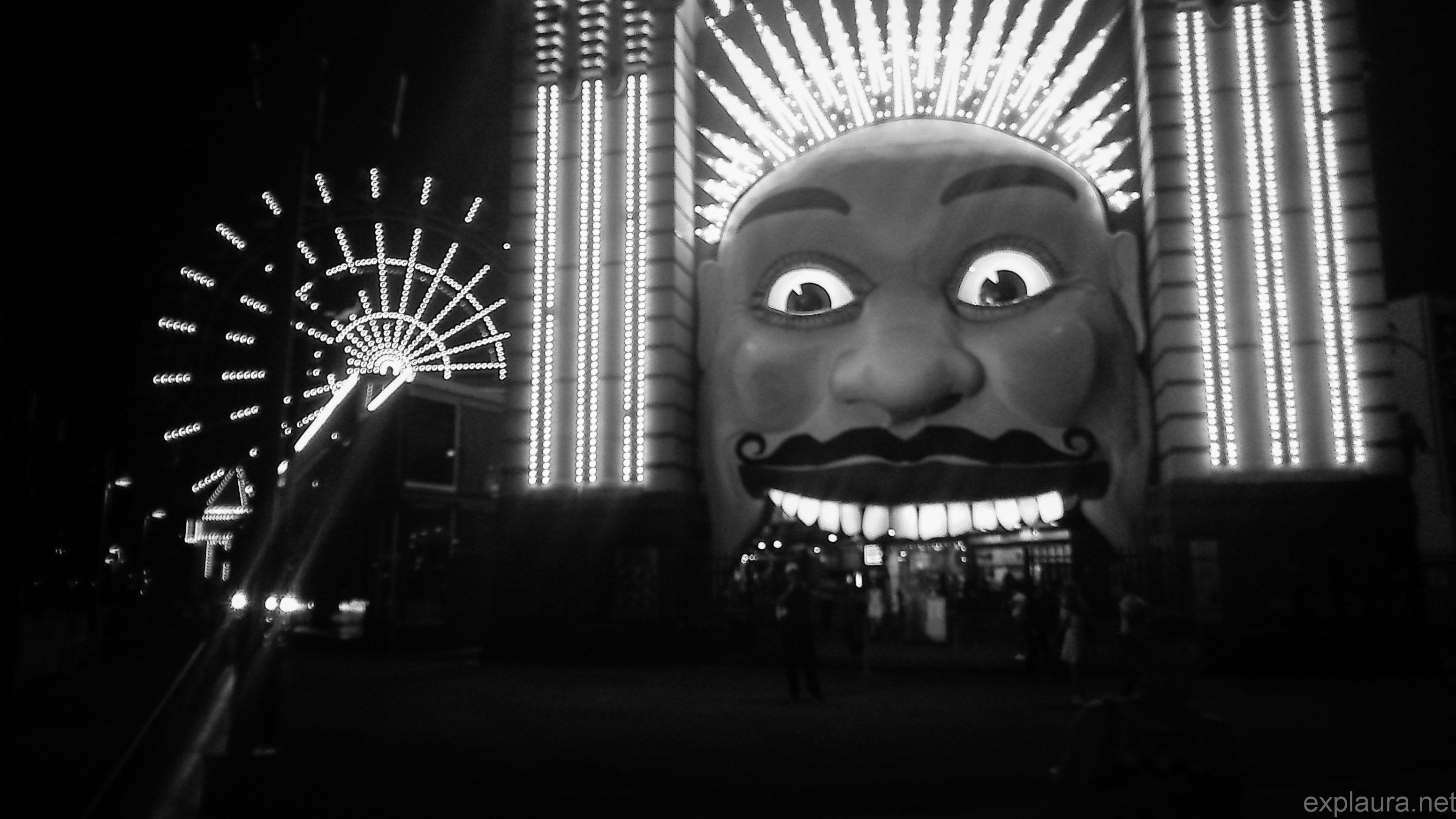 A couple of times this year, my house-mate Crystal and I have been on what I’ve dubbed “flatmate date nights” (because I am the creepy one in all of my human relationships).  One of my favourites was toward the start of the year, when we went to see Anchorman 2 at the moonlit cinema—ie we sat in a park with a bunch of other people at night time, hung out on bean bags and ate junk food.  It was pretty excellent.  This time we went to Luna Park, a mini theme park on the shores of Sydney Harbour.

I’ve been to Luna Park before, but hadn’t realised how long it had been—last time I was there must have been around 2005, after it had just reopened for the nth time.  This was before I’d broken my back for the second time (and possibly before the first time, too), and I didn’t really think our visit through.  As it turns out, rides consist pretty much solely of motions which jar your back, either by wrenching you from side-to-side, or jostling you up and down.  There are warnings everywhere that people with neck or back problems shouldn’t go on the rides, and I can definitely see why!  No more rollercoasters or spinny things for Laura.  We went on the ferris wheel a couple of times though, and Crystal went on the ‘hair-raiser’ for me.  We also went on one of those pirate ship things (always my favourite) which go upside-down, and I giggled maniacally the whole time.

We meandered to check out ‘Coney Island’ and went down the giant slide, though I was again terrified—when I was a little kid, rides were just exciting and I felt safe.  Now my body’s already ridiculously broken, and I know how much harm I can come to if I’m jolted even a little in the wrong way.  Oh well, at least I can still snowboard!

My favourite part of the evening though was the photo display in the entrance to Coney Island.  Haha as I commented to Crystal, “we must be grown-ups, we’re looking at the photos rather than at the silly mirrors behind us!”  The gallery showed images of Luna Park over the past hundred years, and they were magical.  There were a lot in black and white from the 60s in particular.  There were servicemen (I automatically wrote ‘and women’ then realised… no, not so much) going on dates with girls in pretty frocks, turning out to see people walk tight-ropes, or to go on the rides, or to steal a quick kiss in the dark.  I’m quite sure people were just as douchey then, but all the same, it seemed terribly glamorous.  My life is entirely lacking in glamour in the traditional sense, and I seem to be quickly turning into the girl who wears hiking gear everywhere.  In fact I took my friend Sal to North Face yesterday, and two of the staff independently came up to me, looked at my shoes, and went “wow, they look well-used”.  I’ve only had these hiking shoes for around 8-9 months!

Another thing entrancing about the photos was how excited everybody appeared.  I guess in the days of internet, we have instant access to whatever entertainment we want, whether that be books, movies, articles, comedy, naked people, or cat pics.  Stupid cat pics (except Chemistry Cat, I like him—science puns ftw!).  While as the night drew on, more people started to come into the park, it was still sparse—nothing at all like the hundreds and thousands flocking to it years ago.  Perhaps yay for entertainment, but boo for our lack of ability to get excited about the prospect of a night by the ferris wheel.  Though I must say, ‘make out with guy on ferris wheel’ has been added to the bucket list.  I might even let him touch my thigh (ooh, scandalous!).

Oh and PS, I’ve done all of the New Zealand posts, but as I back-dated them they didn’t appear in front of the ‘Lowenbrau’ post.  If you go to www.explaura.net/category/new-zealand/, you’ll see them all there sweetly waiting for you.