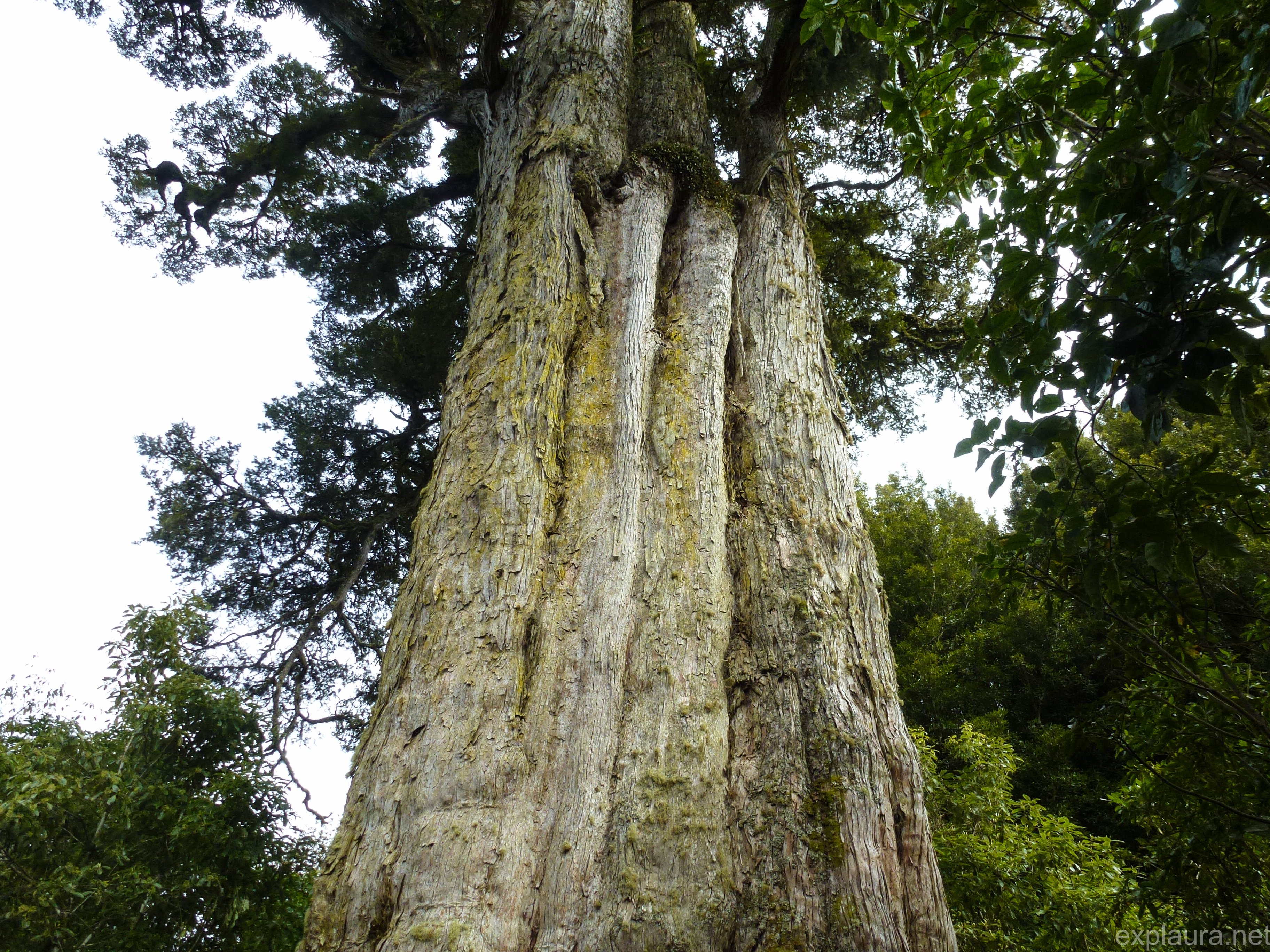 Waking up in a car park (again), the mission for the day was to make it to Taupo.  After an epic number of adventures the preceding day, the plan was to take it a bit easy.  That’s probably a good thing, as given that I can’t really remember the morning, I may have been in some kind of exhaustion-induced coma.

Our first (I assume!) stop on the road was an anonymous-looking car patch (I’d say car park, but it wasn’t really worthy of the name) by the side of the highway.  My curiosity was piqued, so we did a u-y and pulled up, only to find a mysterious-looking path wending its way into the forest.  This was the Pouakani Forest, and we followed the path until we found ourselves at another giant tree.  Result!  Happily, I took a photo of the sign and can therefore tell you that this tree was nearly 2000 years old, 4 metres in girth, and 30-odd metres tall.  Trees are cool.

The lady at the i-Site in Waitomo had recommended we stopped at Whakamuru Dam, but this turned out to be exactly 0% interesting.  After the dam though, the landscape changed to become really intensely beautiful.  It reminded me a lot of the Alps, and of the sights you see from the train when passing through southern Austria and Switzerland.  I saw a delightful village on an island and insisted that we stop so that I could once again take far too many photos.  It reminded me of a little Swiss hamlet, though I admittedly failed to capture that in my photos.

A bit of an interval later, we covered the last stretch of the drive to Taupo, my terrible directions notwithstanding.  We then proceeded to head straight back out of town until we found ourselves at the incredible Huka Falls.  This is apparently one of New Zealand’s most visited natural attractions, and the sheer volume of the water is amazing: enough to fill two Olympic-sized swimming pools every second.  It was great!

Now, I had little idea of what we’d actually do in Taupo, other than perhaps find some more hikes to do.  We popped into the i-Site and checked out all of the brochures, and I asked one of the rangers (or whatever they’re called) which walk she’d suggest.  “I know we can’t do the Tongariri Alpine Crossing,” I said, “due to the snow, but—”

“Actually I’ve just had a phone call,” she interjected.  “It’s open for the first day this season, there’s no snow, you don’t even need a guide!”

‘Whoa’ went my brain.  While I feel rather negatively about all things uphill, this was meant to be one of the best day-walks in NZ, if not the world.  But should we?  We weren’t quite sure, so bought the guide to walks around Taupo and went to have a nap by the lakeshore.

I completely failed at napping, instead plotting and scheming away.  I flagged all of the day-walks which sounded good, handed them to Guma, then suggested that we go and check out the Craters of the Moon.  Did not regret.  I mean, how super freaking cool are volcanoes?  And any evidence thereof pretty much makes my day.  So we went for a wander around the Craters, smelled the sulfur, and pretended we were dinosaurs from the Land Before Time films.  (Okay, so maybe it was just me doing that.)

Throughout this, I’d slowly realised that doing the Tongariri Alpine Crossing the next day was absolutely compulsory, so we booked it back to the i-Site to arrange a shuttle (the walk is one-way).  We were suddenly committed.

Picking up supplies from the supermarket, we next went in search of a shower: there was a ‘super toilet’ or something along those lines by the i-Site, but as I walked in I realised that the showers were already closed for the day.  “Nooooooooooo!” I wailed at the attendant.  “I need a showwwwwwerrrrrrrrr!!!”

“Havyewaka?” she repeated, to my continuing blank expression.  “Haveyewaka?  A ka ka ka?”

“Oh!” I replied, figuring it out.  “Yes, we do have a car!”  Embarrassed by my apparent inability to understand the Kiwi accent, I hurriedly got directions to a gym with showers, and it was time to go.

Post-shower, we decided to head to the southern end of Lake Taupo so that it wouldn’t be too epic of a drive in the morning.  The lake itself was beautiful, and it was a very scenic drive.  Plus, I had this epic pita bread full of mushroom risotto, salad, and feta, and it was absolutely delectable.  Leaving town I saw a young couple silhouetted on the beach, which probably should have been sweet or something, but instead all I could think about was how clammy and goosepimply they have must been after swimming in such cold weather.  Yup, I’m a romantic.

After getting lost and my getting a bit shitty (me minus sleep equals cranky me), we found ourselves an official free camping site.  There we encountered our van-twin: we’d seen the van matching our own in the supermarket car-park earlier.  My observation skills are awesomely bad, and so I’d actually walked up to this stranger’s van to try and drive it away before Guma pointed out that it was not in fact our vehicle.  (One snow season in Jindy I borrowed my friend Karl’s car all season, and I could never recognise it until I walked around to check if it was the 4wd with bullets in the back.  I still have no idea even what colour that car was.)

Anyway I got chatting to the guy from our van-twin and it turned out he was a Kiwi dude, travelling around with a Canadian girl.  I wondered whether it was international romance.  I hoped so!  It’s the most impossible and yet the most beautiful when it works out.  (Okay, so I take it back about the lacking-romanticism!)

The next day would be a very, very early start, so I knew I had to get to bed.  All the same, the stars were so beautiful that I couldn’t resist watching them for a while by the river.  (They didn’t move much :p.)