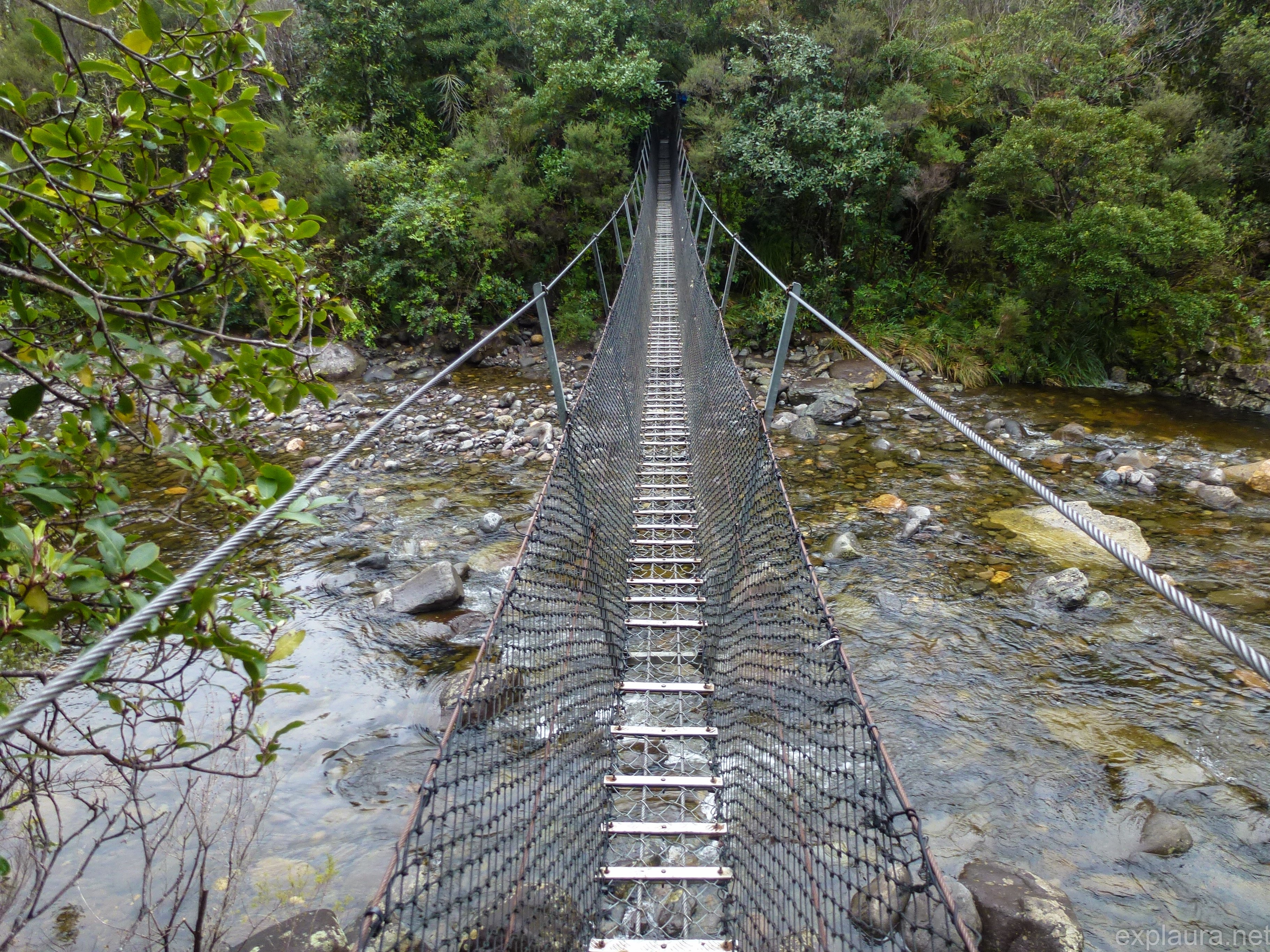 Our final hike for the trip would be going up the Pinnacles in Coromandel, and I was not excited.  On each of the preceding hikes I’d gotten myself through the uphill sections by telling myself that (a) I would have the world’s greatest ass, and (b) at least it wasn’t as uphill as the Pinnacles.  Yup.  I am uphill-averse.

The Pinnacles hike is a fairly constant uphill return (ie you go up the path and then you go down the path) . It’s 15-16km, and we had a pretty great day for it: not too hot and not too muggy.  It also seems as it’s not on the tourist radar, as we only met a handful of people on the track, and most of them Kiwi.  There was one family with a particularly British look to them, and the dad greeted us with a resounding “buenos dias!”  “Indeed,” I replied.  “Oh, don’t mind me,” he said.  “I’m just practising my Spanish.”  “Muy bien!” I answered as we went past, suffering from typical adverb/adjective confusion.  “Oh, good on you!!” he called back, delightedly.

Once you reach the plateau up the top and before the final ascent, there’s a very fancy hut which was guarded by a big black labrador.  So it was time for a puppy break and a vegemite sandwich before the final haul.  There were approximately a zillion stairs, but we got there in the end.

The ascent to the Pinnacles – WAY steeper than it looks.

Looking down from the Pinnacles.

Building bridges and getting over them. Except for the first part.

On the way back down from the Pinnacles.

At the pinnacle of the Pinnacles. A little bit breezy!

Panorama from the top of the Pinnacles 🙂

On the way back down from the hut, we were confronted by a guy who was running up the mountain.  Don’t you kind of hate those people?  Who runs up a mountain!?!  Eugh.  He didn’t drop the pace, either: he passed us on his way out of the park just before we reached the end of the trail.  How rude!

We stopped in at the ranger’s hut on our exit to let her know that we were down and safe, as most people do this hike as an overnighter rather than a day-trip.  “What, are you back?  Didn’t you go to the top?” she asked.  I replied that yup, we had, we were just swift.  “Gosh, you guys must be fit!” she exclaimed.  I laughed at the idea.  “I’m not fit, though he might be.  I’m just stubborn.  And really, really competitive.”  (It took us 5:10.)

Heading back to the van, it was time to return to reality, though we took a beautiful road to get there.  Our destination for the night was Manukao, an outer suburb of Auckland, where we would have hot showers and sleep.  Also food, weirdly (and hilariously) enough at the Lone Star.  I forgot they existed—one opened in my hometown when I was around 12, but someone died falling on a peanut or something.  I don’t think it went too well after that!

The views from the road weren’t awful.

The next morning dawned pretty damn horribly to be honest.  The weather was windy as hell (which you’d assume would be quite windy, what with the heat and up-drafts and things), and it was freezing cold.  We went for a drive to and then through Auckland, checking out some of the pretty coastline, but not keen to actually get out of the car.  I later went looking  for a toy donkey for my housemate, as I’ve somehow gained the habit of buying her donkeys from the places I go to.  No luck though.  We also picked up some superglue, so that we could fix part of the van which I’d casually and completely unintentionally ripped off!

We spent our last bit of time at the Botanical Gardens.  Now, as those who’ve been reading this blog a while know, I really enjoy going to botanical gardens around the world and taking photos of the flowers.  Not really sure how macho body-builder Guma felt about it, however!  I’d take a photo, get all excited and show him, and he’d give an obedient nod and make some kind of affirmative sound.  Hahaha.

Finally it was time for the airport, and so we returned the van, our not-insignificant 2539km on to the clock.  Once at the airport, Guma and I split up, as we were travelling with different airlines (I found him at his gate a couple of minutes before he was due to fly out though, in order to say bye).  Now, I’ve spent quite a bit of time in New Zealand airports, and the couple of hours I had to kill at Auckland airport made me reflect a bit on that.

A few years ago—technically, more than ‘a few’ at this point—I found myself dating a ski instructor.  You’d think I’d learn, really, but nuh-uh.  Anyway, after a delayed, redelayed, and delayed-some-more start date, it was time for him to bid adios to Australia for the season and head off to NZ for ten weeks.  It was fine though, as i’d be over a couple of times in that period.  Haha and if the ‘ski instructor’ wasn’t a clue, things did not go well.  The opposite of well, actually, and I found myself in NZ, heart-broken, and completely alone.  So I emailed JFord, who has appeared in this blog before (Mungo road trip; our vlogs in Russia 1 2 3), and said “just get me the fuck out of this country”.  Now Jess is also my attorney, emergency contact etc, and so while she was doing magic with my frequent flyer programs and credit cards, I spent the day snowboarding.  (Awesomely.)  Anyway, long story short, not only did Jess get me out of the country for under $200, she got me out in under 24 hours (with 14 of those in an array of Kiwi airports).  She also treks up to Sydney all the time to meet my outrageous demands for adventures, she came to visit in Russia, and most recently helped out with my Belgian visa.  You see, I had to have a financial guarantor, and I’m single and have no family other than my Nan.  So I asked Jess if she’d mind, and she spent the next few days frantically running around, calling the embassy, getting statutory declarations drawn up, seeing Justices of the Peace, gathering together paperwork, and finally sending it off.  The end result was that I got my visa and I am in fact now set for Europe in around six weeks.  But what I guess is what I’m trying to say is that I couldn’t sort out the insanity that is my life without her on my team, and that everybody needs a JFord in their lives.

To finally wrap up this post, here’s an interactive map of the journey Guma and I took through North Island.  The blue numbers are where we spent each night, and the green numbers show the bigger walks we went on.