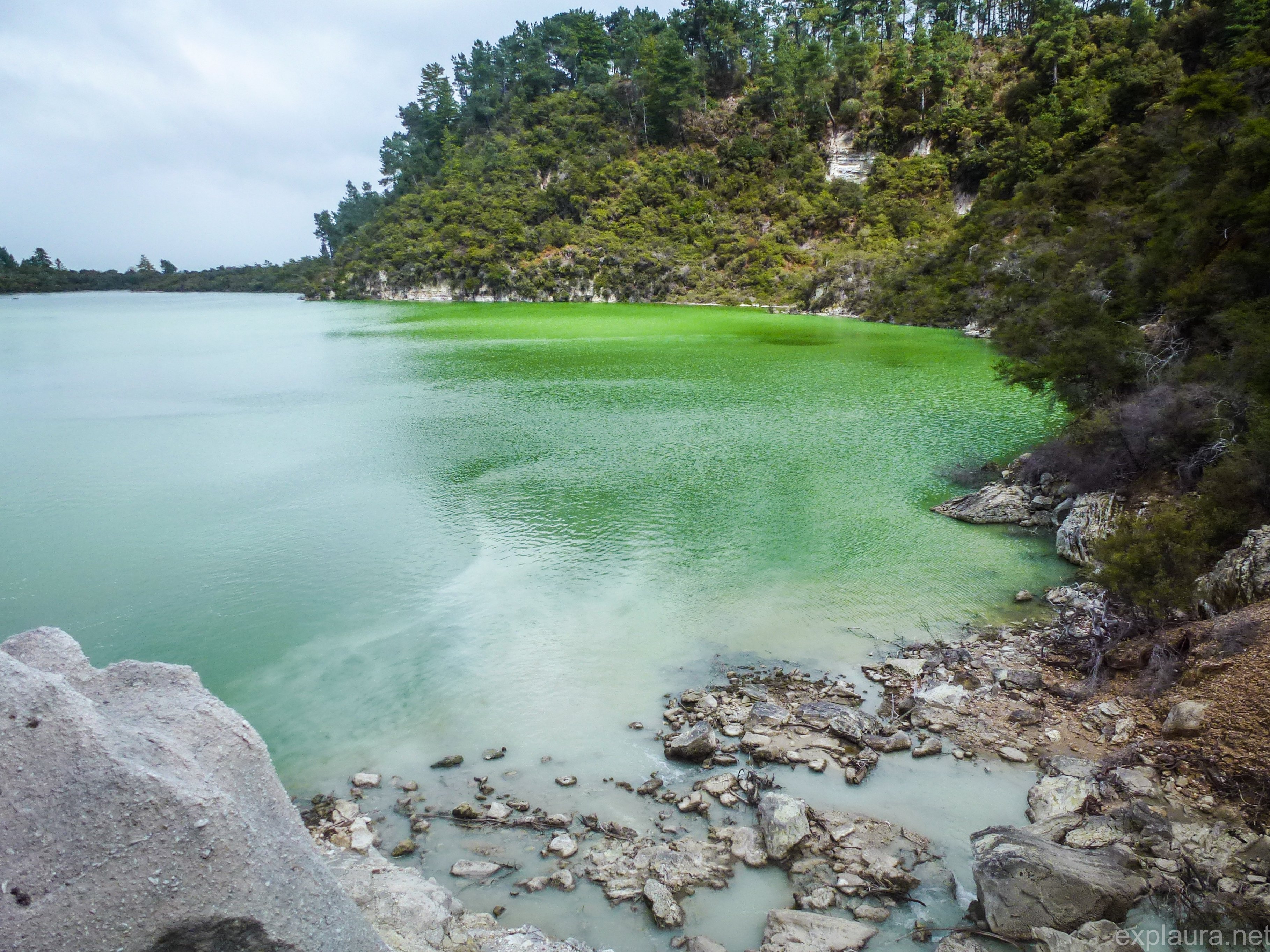 Okay, so just to clarify, New Zealand did not in fact erupt.  We did however see quite a bit of volcanic activity on this seventh day of our Kiwiland road trip.

Our first stop for the day was going to be Wai-o-Tapu, “Thermal Wonderland”, and we were aiming to get there before the daily eruption of Lady Knox Geyser.  It was quite interesting, actually: an employee came out and explained to us that the geyser had been discovered by some convicts in the area.  They were part of a work gang, and one day stumbled across some nice water for washing their clothes.  So they stripped off and started to soap everything up, when suddenly, whoosh—their clothes shot up twenty feet into the air, and the convicts went running off naked into the bush.  Eventually they learned that soap powder set off the eruption, and started to build up and tame the geyser to see how high they could get their clothes.  Here’s a video of it erupting:

Post-eruption, we picked up two hitch-hikers on our way back to the park properly.  They jumped in and said hello.  “German?” I asked, and shockingly, was only 50% right.  Seriously—that’s how many Germans we encountered; they virtually had a monopoly.  Actually I think they may have taken over New Zealand, real quiet and ninja-like.

We spent quite some time wandering through the park, and I’m not going to lie, it was pretty awesome.  The make-up of the area meant that the water was full of chemicals, turning it all kinds of pretty—and bizarre—colours.  On the way out to Rotorua, we also made a quick stop at some mud pools, which had an intensely primordial feeling about them.

Next on the agenda was seeing a goddamn kiwi!  And I’m not talking about New Zealanders here, but rather the bird which is their namesake.  It’s a bit of a bizarre creature, being one of the very few flightless birds, covered with feathers which are almost closer to hair, and inhabiting some weird zone between birds and mammals.  Huh, I guess they’re kind of like chlamydia, or as I prefer to call it, “dino-vagina”.  Chlamydia has been around for such a long time that it doesn’t fit properly into any of our modern-day ways of categorising animals.  It’s amazing that something so old is still so wildly successful as an organism.  Kiwis are less wildly successful, despite their sort-of-mammal, sort-of-bird, just-being-arbitrary kind of status.  They’re pretty tasty, apparently—well, stoats and other introduced predators seem to think so, anyway.  Ooh and another fact: no animals with four legs is native to New Zealand.

Kiwis being nocturnal, and us being decidedly not, we hadn’t seen any on our explorations so far.  Thus it was time to go to “Kiwi Encounter” at Rainbow Springs in Rotorua, where we spent a couple of hours learning about the animals.  We saw some eggs and a baby kiwi, then a couple of adults running around in a darkened enclosure.  They’re pretty funky little things.

We were still pretty wiped out and Rotorua didn’t hold that many temptations, so we headed to Base backpackers.  There’s no free camping in Rotorua, but Base charged something crazy cheap like $8 to park in their campervan carpark, with access to the showers and everything.  My precious kindle finally gave up on life, so I helped myself to the hostel’s book exchange, picking up a novel by the name of “Tomorrow I’ll be Twenty“.  It was diverting and a little bit different, about a boy of ten years old growing up in the Congo.  It had this one really beautiful idea, wherein the protagonist couldn’t promise his paramour grand castles and a luxurious lifestyle like his competition, so instead he said that he would build castles in his heart, where she could live forever and be protected.  It was pretty adorable.

Despite the presence of the hostel bar maybe 15 metres away, we then called it an early night.  I may in fact be boring.  What can I say?