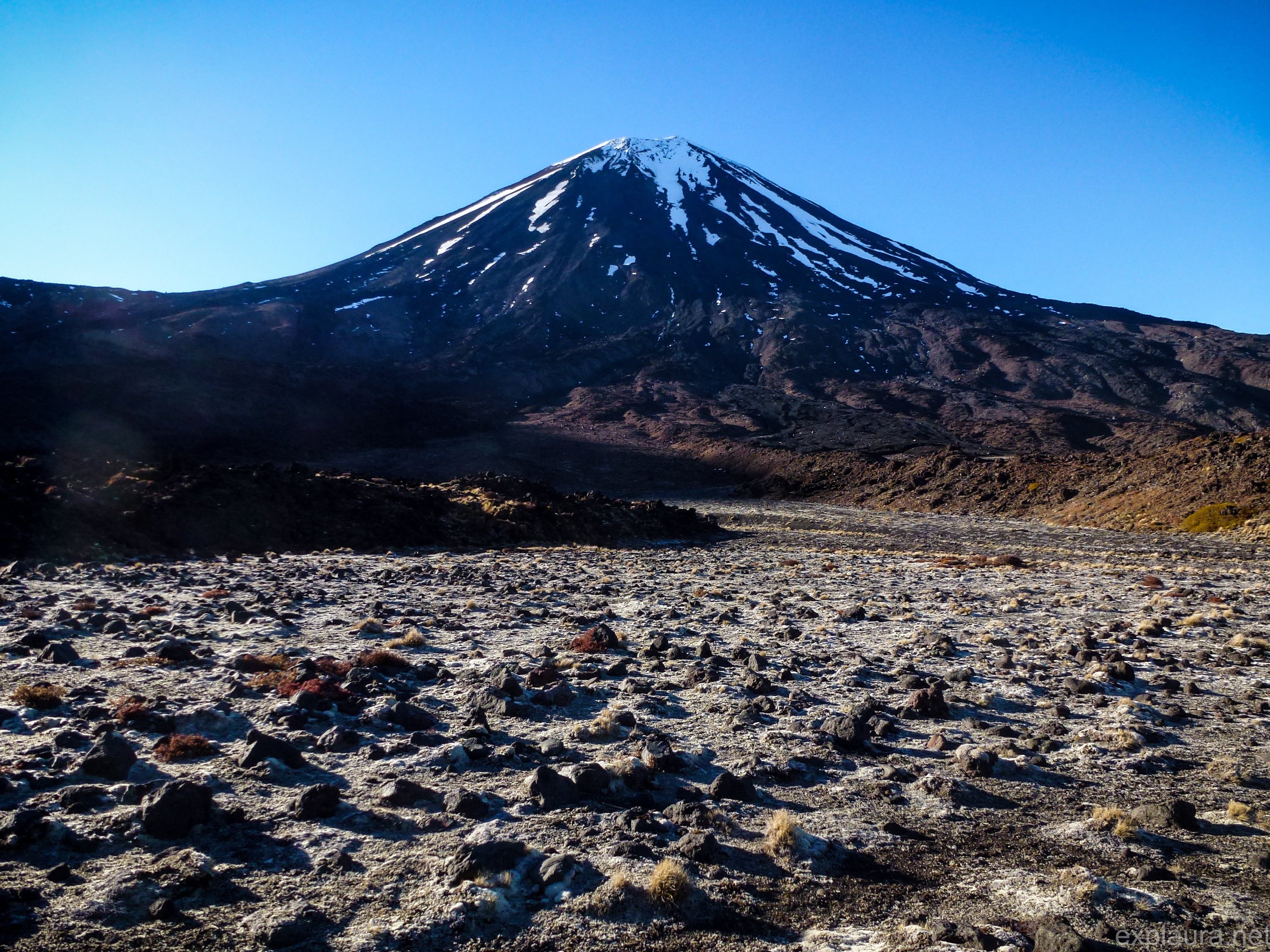 Everybody on the bus was German.  This was pretty much the theme for our New Zealand trip: everywhere we went, most of the tourists were German.  It was kind of weird in that in Australia, tourists are normally from South East Asia, but the only time we encountered any Asian tourists would be the next day.  I guess New Zealand has a somewhat different target market!

Anyway, we were on a very, very early shuttle bus which would take us up to the start of the Tongariro Alpine Crossing.  This was the setting for the ‘Mount Doom’ scenes from Lord of the Rings, and about as dramatic and Mordor-like as you could imagine!

Arriving at our destination, the lady on the bus checked we each had some sensible clothing, then we were on our own.  Everybody was kind of milling around, so Guma and I shot off to get ahead of the crowd.  The 19.7km trail is around 6-8 hours long, with the average time being 7 hours, and the weather was quickly closing in.

Walking into the sun, we pretty quickly overtook the people who’d arrived on the earlier bus, and found ourselves walking uphill.  Oh god, that uphill.  So many steps, so much rock—but the scenery was fantastic.  The whole area is part of one of NZ’s volcanic zones, and you could really tell: everything looked dramatic, desolate, dangerous.  You could see old lava flows and craters and it felt sort of post-primordial: like it wasn’t quite the start of the world, but something close enough to it.

After the first big climb, we reached a plateau and smashed along it, trying to get up and over the next ridge before the clouds reached us.  They were still close on our heels, and rising quickly.  This is about when the wind came in, ripping across the plateau.  I hid behind a rock and put on some waterproofs to try and keep some of it off me, and then the last climb was this horrible mix of trying to be fast, poor footing, and winds which were throwing us around.  All I could really manage was a slow trudge, and I started to emote with Frodo: no wonder he nearly bloody gave up!

Cloud had been whipping past us, but luckily we reached the top of our climb before the weather got there.  Result!

We paused to take some photos (below), our hands just about freezing, and a couple of others from behind us caught up.  A couple of Germans and a couple of Dutch.  We travelled in a sort-of group down the very unsteady path and across the next band of snow towards a big frozen lake.  I believe this was ‘Emerald Lake’ or some such, one of the key sites on the crossing in summer, but it was frozen, soooo.   White-ish lake?

Next was a descent by the lahar active volcanic zone.  Seriously, how bad-ass is that!?  I took a couple of photos of steam and smoke pouring from the mountain, and everything smelled of sulphur.  No, though, I did not in fact go into the danger zone.  Apparently sometimes I’m not a complete idiot.

The next few hours were all down-hill: we had a brief stop at a hut, but apart from that just kept rolling.  Eventually we left the rocky alpine zones and entered forest.  There was one spectacular area with a stream running through it that was utterly dead: everything was grey, twisted and lifeless.  It was in the direct path of flows down from the volcano, and a strict “no stopping” zone.

Finally we made it to the carpark, a few minutes after our van-twins.  Our final time was a rather swift 5h30, which in turn meant that we were sitting in the carpark for more than two hours.  I didn’t even have a book with me!  It was soooo boring.  I talked to our van-twins, listened to some German girl raving, and eavesdropped on some French girls to see how much I still understand (gisting, yes.  Conversation?  Not so much).  At last, at last the shuttle bus back arrived, we got in the van, farewelled our van-twins, and hit the road.

We decided to stay in Taupo that night before heading off to Rotorua the next day.  We were both pretty keen on a shower and doing some washing, and I was getting pretty tired and grumpy.  Guma said that the day’s hike was the hardest and furthest he’d walked in his life, and it was definitely tough at times!  I’ve also never spent so much time with one person in my life so was craving some personal space.  As such, I hid away in my version of a man-cave: namely, I pitched a tent and went and sat in it with a cider and some chocolate.  It helped a lot, though I was so tired and grumpy that I just wanted to be back home, chilling with my housemate, wrapped up in my blanket and watching kids’ movies.

The weather that night got a little crazy.  Half asleep I MacGyver’d a flip flop into keeping the tent up.  Later as the tent poles gave way I opened my eyes blearily and said “lol” out loud (I was tired enough that “fml” was just too many syllables).  I eventually conceded that maybe putting some ropes would have been a good idea, so staggered around outside half-asleep to do it, then put on pretty much all the clothing to get back to sleep again.  I ended up in two jumpers, thermals, a tshirt, a beanie, the sleeping bag, a blanket, and a scarf-stuffed pillow.  Haha so basically, it was prime tent weather 😉

Volcanic activity in the distance.

Me and Mt Doom. Sounds a bit like a song.

Toward the end: the way back down.

Red Crater. I don’t know how they came up with the name..?

The track by Red Crater – a little unsteady!