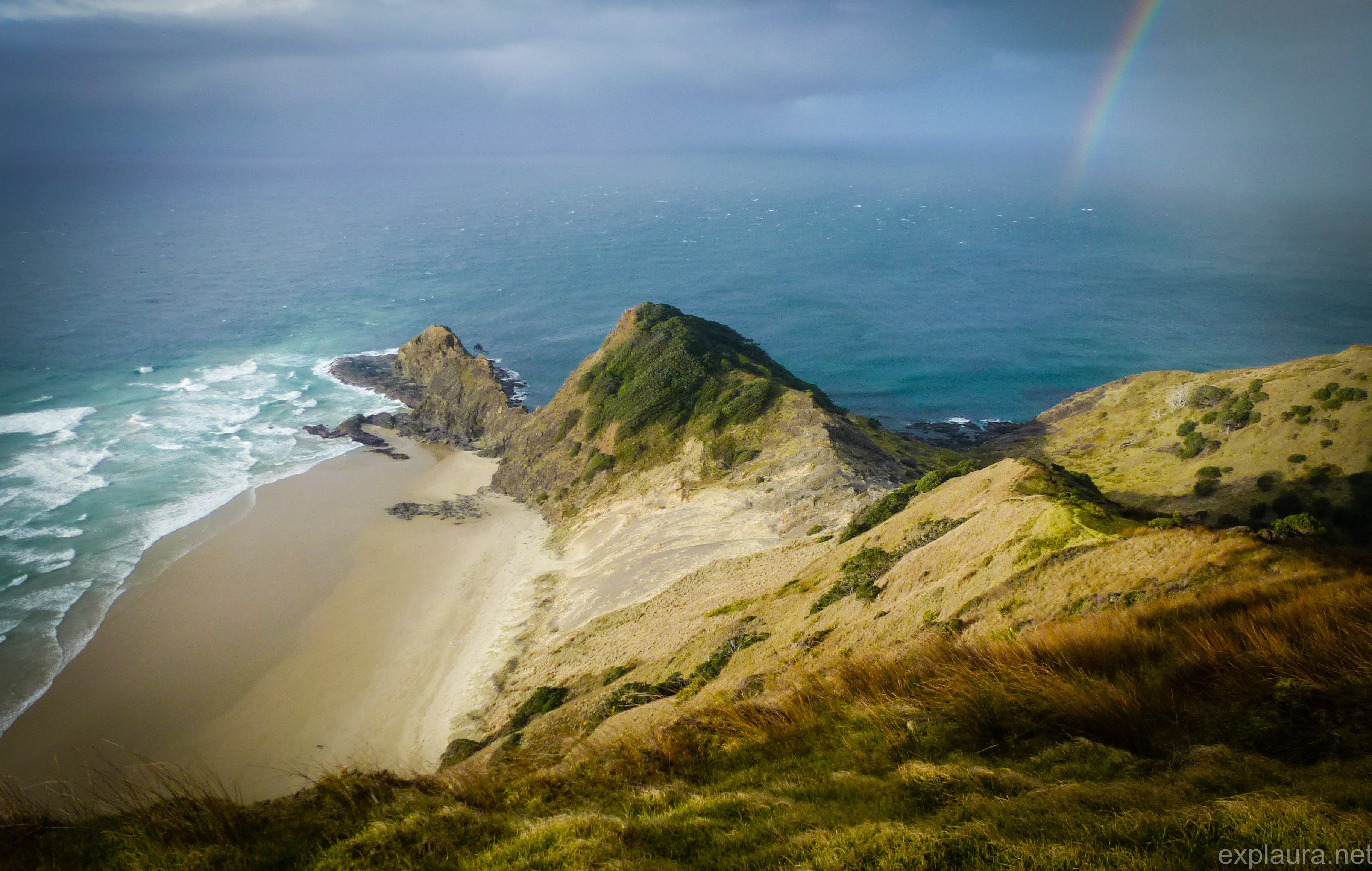 I want to precede this  post by saying that I am not Maori, I am not Kiwi, and I am therefore godawful at remembering the names of places in New Zealand.  As such, I have next to me a pile of six maps of North Island, and who even knows how many brochures.  I realised in driving around that seemingly every place name starts with ‘wh’ and that there wasn’t a hope in hell I’d be able to remember all of it, so just for you—just for you—I picked up all the relevant brochures and lugged them back to Australia with me.  Because apparently this is what happens when you go on a road trip with no phone and no internet.

After waking in our fairly awesome road-side location, it was definitely time to go for a wake-up drive before doing anything so mundane (read: practical) as getting out of my pyjamas.  Taking some kind of scenic detour, we ended up at an oil refinery.  Not exactly a tourist attraction, so we looped around to the ocean front and parked on the grass.  It was all very peaceful and beautiful—there was a broad bay in front of us, overlooked by some distinctly volcanic-looking mountains.  There was another car parked off to our left flank, and in it a man sat quietly, window open, radio on, reading the Sunday paper.

“I could retire here,” said Guma, choosing to ignore the intervening forty years.

I wandered off to get changed, and we meandered onward.  We’d seen multiple signs for ‘One Tree Point’.  ‘That sounds scenic,’ I thought to myself, and suggested we check it out.  We then proceeded to spend the next fuck knows how long driving around, with all signs pointing to ‘One Tree Point’, but every destination having far more than one tree.  It was all lies.  Lies I tell you!

After far too long, we hit the road properly, and headed up SH1 to Whangarei.  We’d done a small amount of planning the day before—Friday afternoon at work I’d taken a long break (don’t worry, I worked to make up for it!) and done some investigation.  I’d written down a list of places, looked up a few attractions and printed out some hiking notes, and marked them all on a map.  The points formed effectively a big figure eight over the top half of North Island, and we’d decided on a track that would take us up to Cape Reinga Lighthouse to start with.  So from Whangarei, we started heading north, continuing up SH1 and picking up a hitch-hiker.

Our hitcher was a friendly Maori lady who was more than happy to perch on the couch in the back of the van.  She was going to around 30km out of town, and when she found out where we were going, warned us to be careful.  “My people like to smack tourists over the head and rob them,” she said.  This wasn’t the first time I’d heard this, especially re travelling to the Northland, and we were obviously tourists (as can be judged by the van).  However Russia has given me a probably bloated sense of confidence, so I wasn’t particularly concerned.  And no, this isn’t a moment of dramatic foreshadowing: we did not in fact get robbed.  Or smacked over the head, for that matter.

With our hitcher still inside the van, I was having a look at the map, and  I’d decided I wanted to go to the kauri forests on the west coast.  Guma is pretty much down with whatever, so after dropping off our extra person we headed back to Whangarei, thence onto the 14 and 12.  There we met our first taste of NZ’s ridiculously windy roads.  Now, it should be mentioned that I’m the girl who threw up on every school trip, and while since learning to drive I’m generally okay, Guma lives in a place that doesn’t have corners.  (This is not unusual in regional Australia—roads just go on forever and ever in a straight line.)  As such, wherever possible, I tried to do the mountain and night driving, and he did all the other bits.

After a couple of hours we made it to the Waipoua Forest.  This is, as per the brochure, “home to the best preserved and largest of the remaining kauri forests in New Zealand.”  Kauri are magnificently huge and true-growing trees, but they are dying out for some as-yet unknown reason. What I find truly amazing about these plants is that though they’re these incredibly huge and sturdy structures, their roots are tiny and run over the ground rather than under it.  How could something so massive be supported by something so small?  We went for a bit of a meander, seeing the ‘Four Sisters’ and ‘Te Matua Ngahere’, ‘Father of the Forest’.  Upon walking around a corner and seeing the latter, Guma—not given to casual religiosity—burst out with “holy jesus.”  It was quite something to see—massive, and a casual 2500 to 3000 years old.  A short drive later we also visited Tane Mahuta, ‘Lord of the Forest’.  I like trees.

Guma in front of the Father of the Forest.

Lord of the Forest.

Leaving the car park from Te Matua Ngahere, I decided to cook up some pine nuts to have with our salad later on.  An incredibly hot French guy came over to see if we were okay, as the stove was misbehaving.  I need to find myself in trouble more often.  Anyhoo we left the forest and stopped for lunch.  Guma, watching me prepare, turns and says to me “you’d be the best gypsy wife, eh.”  Yes, yes I would.

Next, it was heading north as north can be, aiming to get to Cape Reinga and see the lighthouse there by sunset.  Now, New Zealand may look very small on the map, especially compared to Australia.  But I’m here to tell you that all of the maps are wrong, and that travelling from point A to point B inevitably takes you halfway around the fucking globe.  After several more hours on the road, I was despairing of ever reaching the Cape.  Cresting every hill we’d see yet more land, stretching on forever.  We made a brief stop on 90 Mile Beach, and then the road went on and on and on some more.  “Fuck you, New Zealand,” I was ranting.  “Where is the fucking cape, this fucking road is lasting for fucking ever and it’s not even fucking possible.”  (Yes, I do have a favourite verb!)

An interminable period later, we finally saw the end of the road.  At last!  At last!!!!!  So we got out of the van and were hit by wind so strong that I stumbled backward.  It was ridiculous.  We could also see a storm rapidly approaching, and there was no way I wasn’t getting a photo of the damn lighthouse after all of that effort, so laughing hysterically (well, I was), we took on the wind.

There were two German girls down by the lighthouse, but otherwise we had the place to ourselves.  It was really very beautiful.  It’s a sacred place for the Maori people.  This is partly because you can see ‘the mixing of the waters’, where the Tasman meets the Pacific, and according to legend this was where the masculine sea met the feminine one, and all of the whirlpools were them getting… shall we say ‘amorous’?  Secondly, it’s legend that deceased Maori spirits would gather along a sort of spiritual highway from all over New Zealand and ‘leap off’ at Te Rerenga Wairua (Cape Reinga).  Here they would enter the underworld and join their brethren from Hawaiki.  It was all super interesting.

Suddenly, I heard the Germans behind me start losing their minds over a rainbow.  I turned around to see, and the sequence of shit-losing continued.  “Guma!  It’s a rainbow!  It’s a rainbow!”  (I never pretended to be cool).  Guma just nodded.  “Yup.”  Haha hilariously, earlier that day I’d been talking about rainbows, and Guma had said “yeah, I don’t know if they get rainbows in New Zealand, hey.”  I had a good giggle.

Me being a smurf in front of Cape Reinga lighthouse.

The epic drive was worth it, no?

Running on fumes, I took over the wheel and we made it to Kaitaia, thence to Paihia in the Bay of Islands for a hike the next day.

We travelled from where slept on the first night (1) to (2), via Whangarei and the west coast.  I’ve marked on the oil refinery, the start of the windy roads, the forests, and the lighthouse (that’s naturally the giant fire hydrant).