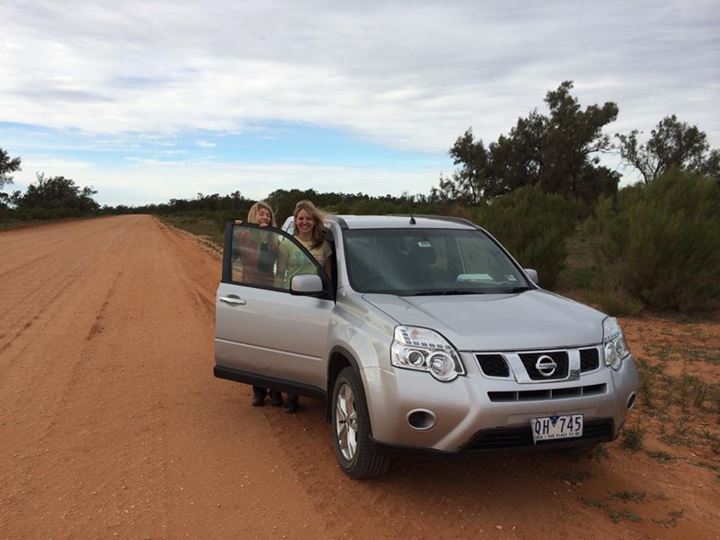 Still tripping (days 3, 4 and 5)
The smallest of vices

This particular road trip came about after I saw a photo taken in Mungo National Park on a Central Coast train, and immediately texted Jess saying that our attendance was compulsory.  I didn’t first check where it was of course, so it was quite a surprise to find out that it was 1000 km away.

The plan sort of drifted along, as plans I’m involved in tend to do, and somewhere along the way Nikky got involved as well.  Haha the three of us pretty much have the entire spectrum of plan-age covered: Nikky never plans anything, I plan the bare minimum to allow for spontaneity, and Jess told me today that she’s already booked her flights for her Germany trip next freaking April.  Jess and I are both hyper-organised control freaks in general, but I like a bit more wiggle room, as I always change my mind.  Then again, Jess likes to do things in a fairly leisurely fashion, and it’s taken her a while to adjust to my tendency to come out with things like “oh, I’ll just catch a train from Russia down through the Ukraine and pop out somewhere near Italy a couple of days later”.

Finally it was time to head off, and off to Melbourne we went.  We were each flying from different states, Jess living in the ACT, me in NSW, and Nikky in Queensland, and actually we ended up visiting both Victoria and South Australia, so we had a lot of the country covered.

I hadn’t slept in approximately forever and was probably the grumpiest person in the world upon arrival in Melbourne: I was already down 2 nights’ sleep for the week, and this was a situation that only deteriorated as time went on.  I didn’t sleep that night, and had an average of 2-3 hours’ sleep for the entire trip.  Needless to say, I was kind of a psychotic bitch (because ‘kind of’ and ‘psychotic bitch’ aren’t inconsistent at all).  In saying that, I was very happy to be doing all the driving, and given that I had my music and an ample supply of coffee (and wasn’t subjected to too many questions), I managed to rein in the psychopathy.

Jess and I stayed with my lovely friend V, who upon Jess’ arrival, announced that “I’ve fed her pizza and she’s not quite as angry any more”, as though I weren’t standing right in front of them.  Haha I felt like a bit of a high maintenance pet.

The next morning we got underway, with our first stop as Big W on the outskirts of town.  We needed to stock up on useful things like fuel jerry cans, food, and around 40L of water.  Also a unicorn outfit.  And some bowls which we underhandedly acquired.  Then it was a 6-hour drive to Mildura, with a short stops for lunch and photos on the way.

Our first night’s camp was in Mildura, and we quickly got into a routine of Jess and Nikky setting up the tent and bedding while I cooked.  Jess had tried to tell me that we could eat canned soup or something while camping, and I asked her what kind of culinary heathen she was.  Instead, we had veggie korma the first night, pumpkin ravioli with fresh sage-butter sauce the second, the next night was on the road, and finally an extraordinarily successful blend of wild mushroom risotto and cous-cous.  Canned soup my bottom!

(I should also mention that I lost my SD card with photos and footage of the first two days, so quite a few of the below photos are Jess’):

First photo: a church with a big ‘OMG’ sign on it.

Nikky with the boot full of supplies post-shopping centre.

Jess is a most excellent navigator. We even bought a map!

A ‘Mechanics Institute’, looking very abandoned and very very much in the middle of nowhere.

Day two was a fairly early start as we raided a bakery and then headed off for the national park.  Within the first 20km we were on unsurfaced road, which led to some interesting times.  Sometimes it was gravel, sometimes it was rutted mud.  Sometimes it was narrow, and others it was about as wide as a 5-lane highway.  I hadn’t driven on anything so messy in ages, so it was quite fun!

The road into Mungo National Park. The clouds of dust behind oncoming trucks in no way hampered us (!).

The ‘eternal rest area’ (for the record, in the middle of absolutely nowhere), as Jess and Nikky look anxious.

Nikky and I by the car on probably the world’s widest road.

Jess’ new tent, and our home for four nights.

Once we reached the park, we stopped to check out a viewpoint at the edge of the dried-up lake.  If there’s one overall impression I have from the trip, visually speaking, it’s how incredibly vast everything was.  We were driving around dried up ancient lakes, with fossil records of human habitation and visits going back 40,000 years and more.  Everything was so flat and so infinite: it’s what you imagine the Serengeti would be like, and certainly, animals abounded (though not lions).  Kangaroos were everywhere of course, as well as giant running flocks of emus.  For our first afternoon, we decided to drive the 70km one-way ring road, and save a park tour for the next day.

We had lots of little stops on the way, learning about Aboriginal culture and natural foods and remedies from the signs, and moreover taking a lot of photos.  I’d told the girls to pack some ‘incongruous clothing’ as we’d do some random photos in the desert.  I have a lot of dresses I’m not planning on taking with me back to Europe, so was happy to trash them.  As it turned out, I had a long dress, Nikky had a dragon outfit, and as I’ve already mentioned, we scored a unicorn onesie for Jess.  We were set.  And I would love to show you, but almost everything was on my SD card.  🙁

I feel pretty strongly that everyone (who’s in Aus, at least), should check out this park for themselves.  It’s freaking unbelievable.

On the way back to the camp-site for the night, it was growing dusk (aka kangaroo-o’clock) and so I was keeping a very close eye out for anything bouncing near the road.  I was tootling along when suddenly I saw some emus hanging out looking clueless and dithering about the place.  I slowed down just in case, when bam they scared some kangaroos onto the road.  Omg.  I don’t think I’ve ever been so close to hitting an animal and not actually doing it.  There was like a centimetre between the roo and the car, and happily its joey wasn’t following it too closely so stopped before it got smooshed.  I definitely self-fived.  My self-five was then joined by multiple other fives.  For those who’ve never seen what a roo does to a car:

This is why I was self-congratulatory.

After that, it was off to the camp-site, dinner and a camp-fire.

Me preparing the sage butter sauce 🙂

Nikky and Jess playing with fire.

Still tripping (days 3, 4 and 5)
The smallest of vices