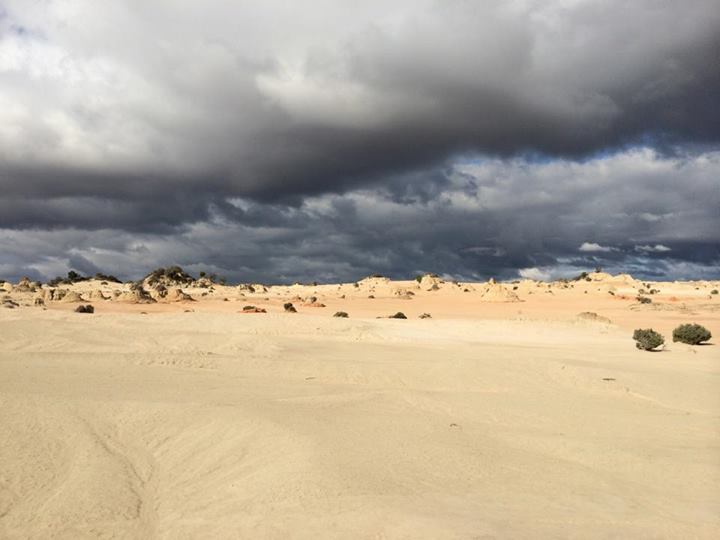 Day three of our road trip dawned bright and sunny.  No, wait, the exact opposite of that: and given that our tour of the pretty rock formations (and, uh, Aboriginal heritage areas) didn’t run when the road was too wet ‘in case we twisted our ankles’, we had some time to kill.  So the three of us went on a hike along the ‘Zanci Heritage Trail’, to Zanci homestead.  It’s an old sheep farm, from when European-Australians started farming the area.  Which wasn’t that long ago, really: I mean, we federated in 1901, and the First Fleet only got here in 1788.  On the topic of European Australians (or not), the weirdest thing happened the other day.  I was walking through Circular Quay when I glanced at an Aboriginal man performing.  All of a sudden, from his semi-squat, he raised his arm, pointed his finger at me, and not exactly yelled but very much projected at me that “you’re European!”.  It was so weird.

Moving on—a couple of photos from the walk:

View from the Zanci Homestead.

We returned to the Visitor’s Centre and were told that the 2pm tour would be going ahead.  Huzzah!  We would finally be able to see what we’d come such a long way for: rocky-type formations.  I feel like I should know what they’re called, really, but no.

We also learned a great deal about Aboriginal habitation in the area, which goes back for approximately a bajillion (>40,000) years.  We learned about their diet, religious habits, and even some plant lore and cooking practices still used by people in the area.  Plus we saw some wedge-tailed eagles, which it turns out mate for life.  (Fact of the day?)

After the tour, Mungo was pretty much done.  Jess and I spread the map on the hood of the car, and she turned to me and asked, “so do you want to go to Adelaide?”  “Yes,” I replied, in a particularly unequivocal tone of voice, and we were off.

What a fabulous drive.  Apart from the first bit of complete retardation, wherein we were driving into the sun on rutted muddy roads with it freaking raining on us and roos everywhere.  It was utterly unreasonable!  There was even the occasional cow, and one of them so large that I thought it must be a hay bale.  Giant amongst cows!

We paused briefly to check the sunset in Mildura (and also twice for snackfoods), and then it was off to South Australia—a first for both Nikky and I.  I was excited out of my mind, and the drive did nothing to help.  The landscape was absolutely lunar and stretched on forever, as the sun set an interminable distance away and the stars started to glimmer about us.  I was in a pretty happy place.

I can’t remember how long exactly—maybe 5 hours later?—we arrived in Radelaide.  The only Australian capital I’d never been to!  I feel like I’ve collected the set 🙂  Nikky and I stayed at my friend Tom’s house, where I managed to be mainly unconscious while they watched blue people leap about on screen to the rough storyline of Pocahontas.  Then, the next morning, time to explore!

I was actually really impressed by Adelaide.  Possibly because I’m so over the Sydney commute (and crowds).  It’s much smaller, having a population of less than 1.5 million.  Lots of beach of course, and actually lots of European trees—apparently there was a big wave of German immigrants when the city was founded, and they brought lots of trees with them.  So as we drove along the roads, there was yellow and general autumnal-ness happening all around us (Australian trees aren’t deciduous—they keep their leaves all year round, so autumn isn’t really a thing here).  It was nice enough that I think, if I were staying in Aus, I’d give Radelaide a go next.  I think my 10-year love affair with Sincity has come to an end.  Weird.

After an appropriate number of shenanigans and inappropriate amount of rolling on the beach, it was time to hit the road once more.  We went down along the coastline, through Coorong National Park, rang emergency services for an apparent fire, and wound up in Mt Gambier.

Bridge to the sky 🙂

Following our last night of the trip, we went for a bit of an explore in Mt Gambier before heading off.  We checked out the Sinkhole Gardens in the centre of town, then Umpherston Sinkhole.  The sinkholes are natural cenotes, ie big holes that result from collapsing limestone (thank you, wikipedia!), and used to act as natural wells in the area.

Mt Gambier itself is very saloon-y: it felt a little like we were on the set of a wild west movie.

Nikky in the secret garden!

A sinkhole in the centre of Mt Gambier.

A waterfall of leaves 🙂

Cutting in-land, we headed for the Great Ocean Road, stopping at Warrnambool on the way.  Where I went for a swim—my first ever in the Southern Ocean.  (I’ve since made a resolution to swim in every sea and ocean… I’ve got kind of a long way to go!)  It was not even marginally warm.

Our final stop would be at the Twelve Apostles, before making it back to Melbourne to fly to our respective home states—five days and a mere 2500km later.  Roadtrips for the win!

At the Twelve (ish) Apostles.