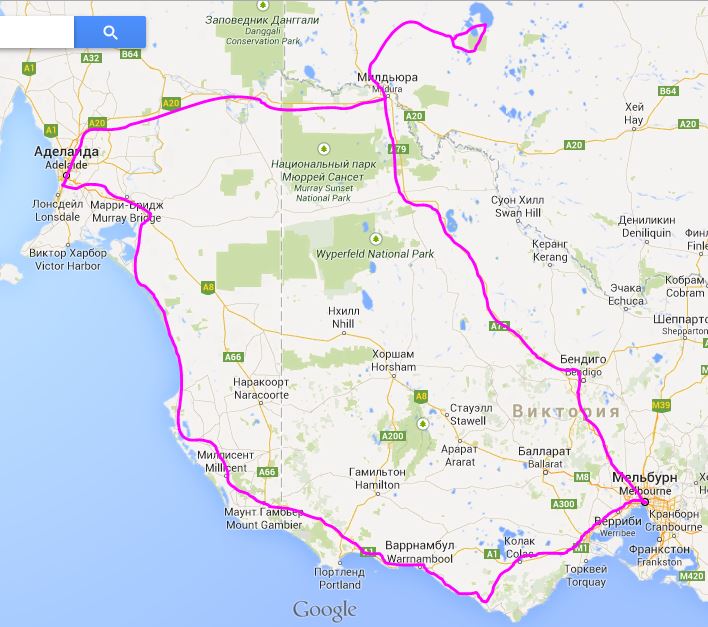 Last weekend was my ten-year travelversary.  As I used to keep a diary, I actually have a record of it: on 10/5/04, I wrote an entry entitled ‘Je suis prest’, saying that

My friend Luke was actually standing behind me at the time, and when he saw the title—’I’m ready’ in French—he started laughing.  I wasn’t even moderately packed.  Some things don’t change..!

To sort of celebrate the ten-year mark and because, obviously, it’s awesome, I spent 5 days last week with two of my best girlfriends, doing a nearly 2500km road trip in south-eastern Australia.  We started in Melbourne, where we stayed with my friend V, before camping in Mildura the next night (Thursday), spending Friday and Saturday in Mungo National Park, Saturday night in (R)Adelaide, Sunday tripping to Mt Gambier, and Monday along the Great Ocean Road back to Melbourne.  I live in New South Wales, Jess in the ACT, and Nikky in Queensland, and we travelled through NSW, Victoria and South Australia—so we had all of the eastern Australian states covered between us!

Jess picked up the car and drove until we were half clear of Melbourne, and then it was my turn.  Haha and my turn didn’t stop—I didn’t relinquish the wheel thereafter.  I love to drive!  I mean seriously, is there any freedom like it?  I love that there’s no ‘last bus’, and almost no reason to stop at all.  When I’m driving I feel like I could go forever!  I’d love to drive across Asia and Europe someday perhaps, if I find someone to do it with.  Of course, that begs the question—car or bike?

I love trains too, incidentally.  I love that the moment you’re on board, you completely relinquish control, and you get there when you get there.  Haha which is I guess how I meant to get a train from Prague to Vienna, and found myself so unwilling to de-train that I wound up in Romania.

Travel by both train and car is way better than by plane—it’s more tangible.  Getting on a plane, you leave one world and find yourself in another like travelling from red to blue; by road, rail or river you get to see the shades in between, and it feels more real somehow.

Considering the roads we’d be driving on (everything from winding ocean roads to gravel to rutted dirt tracks), we hired a Nissan X-Trail.  It reminded me of my friend Karl, who lent me his 4wd for the second snow season I did.  I have no idea what type of car it was, can’t tell you what colour, and actually could never recognise it in the car park until I walked around the back to check for beer cans and shotgun shells.  Oh Karl.  I had such a love-hate relationship with him.  He was one of my flat-mates, and there would be weeks at a time where I was too pissed to even look at him.  He was always drunk or hungover; had right-wing political views; watched 4 Corners just to get angry at it—he’s one of the angriest people I’ve ever met.  When I wouldn’t do what he told me to, he’d sit on me until I submitted, and he was a freaking giant.  Sometimes I’d forget how massive he was until he was nearby, then find myself sort of gaping up at him exclaiming “you’re so big!” without even making a dick joke.  I mean come on.  80% hatred, but the rest is all love.  I mean, if there were some kind of apocalypse, and I was a magical genie, he’d be one of the first people I’d save.  I’d be such a good samaritan of a genie.  I like to think I’d be purple.

I’ve lost the SD card with photos and video from the first two days of the trip, but will do a follow-up post with photos and actually talking about where we went instead of wildly warbling.  In the interim, here’s a video playlist of the final three days:

My favourite videos from the playlist:

The three of us at Tom’s place

Not Beach Weather (swimming in the Southern Ocean)

Units of Measure near the Arch