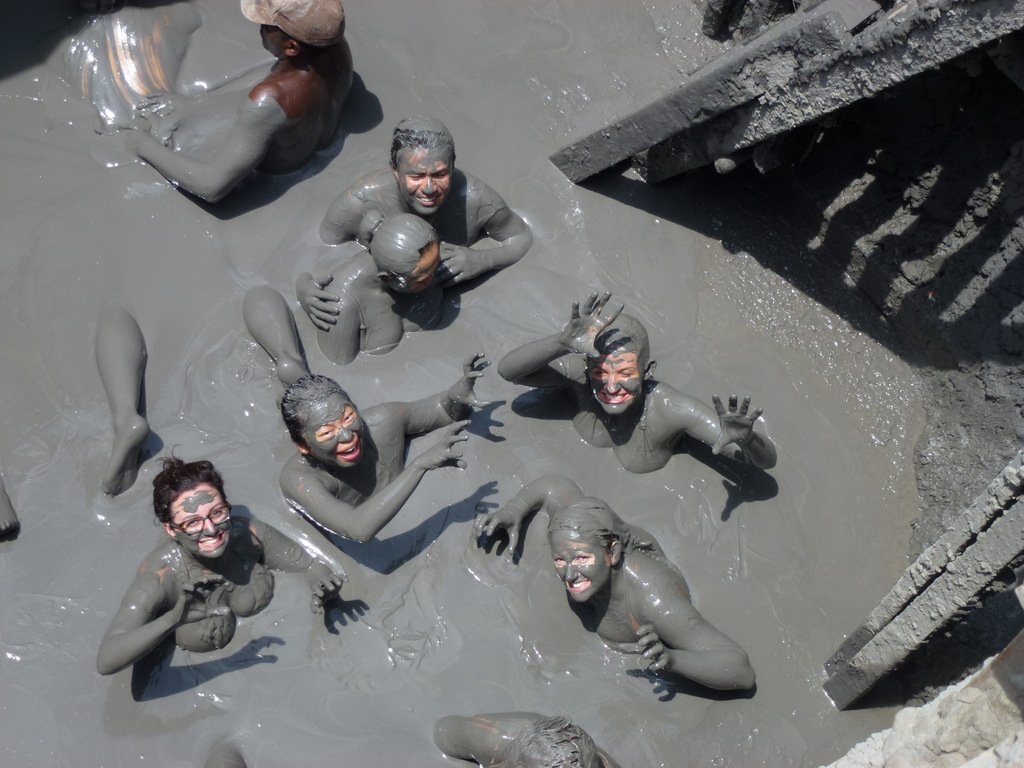 I must say, my boobs have been man-handled more in the last four days than in the preceding year.  In the most innocent of ways, of course ;).

I remember I was talking to a French guy in Helsinki and he was appalled that Finnish people have business meetings.  In the sauna.  While they’re naked.  I said to him that “for all French guys have this reputation, you’re a bit uptight, aren’t you?”

In some ways, nudity is kind of a privilege while travelling.  Privacy is, anyway, at least in hostels.  Obviously you share a room, and the bathrooms aren’t usually much more enclosed.  I’ve never been especially modest, but by now I’m completely indifferent to getting changed in front of people of either gender: it’s more their sensibilities I’m concerned about.

I don’t necessarily feel the same way about random people touching me.  At least, until I went to the Turkish Baths in Istanbul last year, and ended up naked on a stone slab, while some other almost-naked lady rubbed a jar of honey into my body.  Now I just go with whatever.

There’s a Dutch guy in my hostel room, Peter, and we discovered that we both wanted to go snorkelling, so we decided to go to Playa Blanca (White Beach) yesterday.  I’ve actually never met a Dutch person who hasn’t been a reasonable human being, which is I guess how I end up in the Netherlands so often.  Anyway, he suggested that we get up at 8:30 or some such and head off.  Fortuitously, I got up way earlier, and at 8:30 went to go and ask at the front desk what time we could catch the bus to PB?  The guy said “right now”.  And he did not look like he was joking.  It turns out it’s a full day-trip by boat, and the last one leaves at 9am.  Much scurrying ensued.

We picked up an Englishman, Angus, and a Portuguese girl, Rita (I thanked her and Peter for having rhyming names, making it easier for me to remember) on the way.  We then jumped onto the boat and it was freaking fantastic.  Water is totally my element, and zooming across it was superb.

Upon arrival at the beach, we went snorkelling for a bit.  It was pretty cool, I saw some nice fish and a huge lobster.  In saying that, I did my Open Water course on the Great Barrier Reef, so I have been somewhat spoiled as far as fish go.

We had a little hut on the beach (yesterday became rather outrageously gouge-y as far as wallets went), so post-swim went and chilled there.  At some point, a man with a wheelbarrow full of coconuts and alcohol rolled up, and I couldn’t resist.  I didn’t have my camera though (shock!!) so the photo of me in complete beach-bum mode with pina colada-filled cocktail will have to wait.  Next, ladies offering massages rolled up.  Apparently they were very literal with the ‘whole body’ description (boob molestation #1).

Post-lunch, it was more swimming, chilling and day-dreaming.  To be honest, I’m not really made for sitting on a beach.  Running around/playing sport on it, yes.  Swimming, yes.  Sailing, hells yes.  But inactivity frustrates me.  Nonetheless, it was pleasant.

In the evening we headed to an old wall along the sea-coast, to watch the sunset:

We stopped by Cafe del Mar for a moment, as in doing my running-off thing and dragging Rita along with me, we’d lost the guys.  Then it was pretty much dinner and bed.

This morning I got up early to check-out.  Luckily (?!?) I’d woken up at 2am and had never been able to go back to sleep again, so that was fairly easily achieved.  I then went on a trip to a nearby volcano, Volcan de Lodo El Totumo.  After a couple of hours of sitting on the bus as we picked up all of the other people in the city, we went on out.

Wiki’s just told me that according to local folk-lore, the volcano used to be full of the normal volcano-y stuff: ashes, lava, action heroes.  Then a local priest transformed it to mud by sprinkling some holy water into it.  Seems a little dubious to me.  The holy water part, not the action heroes (of course).  It’s quite small, with a fabulous view of a lake and wetlands from the top.  You climb in, lower yourself down into the super-dense mud, and then the attendants give you a ‘massage’.  I use these ones ” because it’s not so much a massage as them slopping you with mud (molestation #2).  As I’m sure you’ve gathered, today’s featured image is from the volcano.

After you’ve had enough of playing in the mud, you endeavour the slippery climb out then jaunt on down to the lake.  There, women grab you by the hand and sit you down in the water, and help you wash the mud off.  Haha unexpectedly, they also took all of our clothes off.  Sudden nudity!  And, needless to say, molestation #3 took place.

I’m now back at the hostel in Cartagena, and in about an hour will head to the airport for my flight to Medellin.  All of the inactivity is starting to drive me a little cuckoo, so I’m looking forward to a big night out and then a few as-active-as-possible days there.  And let’s see if I can keep my clothes on, this time.