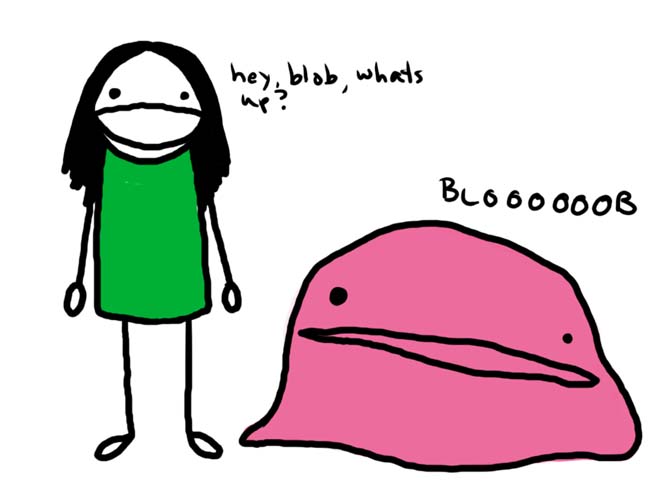 The right-hand side of today’s featured image is a pretty accurate depiction of me at the moment.  One big blob of lazy!  I’ve been doing nothing!

After my adventure to the salt cathedral on Wednesday, Thursday’s  mission was to head into Bogota with Laura’s sister Angie.  We didn’t get going until very late, and I also didn’t realise how long it would actually take to get to the centre of the city: around two hours!  So I got there, headed for Monserrate, a mountain overlooking the city, and came home again.  Also, I missed nap-time.  Disaster!

I managed to survive the day without any real drama (other than being, again, the only blonde on the street and therefore subject to an entirely-in-Spanish lot of attention).  Well, other than my descent of the mountain.  I’d caught a cable car up, and am incredibly glad I did: simply walking the stairs from the top of the lift to the church on the top had me all out of breath.  Yes, I’m unfit, but the 3100-odd metres above sea level didn’t help much!

I decided that I’d walk down the mountain.  It wasn’t necessarily a great idea.  It was a couple of kilometres down, on very uneven rock steps, and my ever-practical boots have a slight heel.  Needless to say, my legs were quivering by the end!  This was more than a little exacerbated by the speed at which I had to do it.  The path closed at 4pm, though I wasn’t too concerned about that.  Until, that is, a local lady saw me taking a photo, asked whether I was going up or down, and when I said down, started to freak out.  (Again, all in Spanish of course).  She was worried that I wouldn’t make it the whole way down before the police left at 4pm, and I’d be in a lot of danger.  So yes, I went rather quickly.

Friday saw me heading into Bogota once more, to check out the Gold Museum (Museo del Oro).  It was freaking cool: but I love museums.  I’m the person that reads every single description, looks at every item (and mentally makes rude jokes about any and all statues), and in this case spent 3.5 hours checking out just two floors.  The basement held a temporary exhibit about Muiscan offerings.  It was entirely in Spanish, but I gave myself a solid self-five (totally different to a clap) for being able to understand almost all of it.

Next it was time for a coffee, where I ended up speaking to an Iranian man at quite some length.  Unexpectedly, he said that he likes Colombia because it reminds him a lot of Iran.  They’re just two places I wouldn’t have thought would be similar.

I loved the simplicity yet geometric awesomeness of this necklace.

I couldn’t help but imagine all these guys screaming excitedly.

This reminded me of a cake! A slightly creepy cake..

I’m obsessed with reflections at the moment. This statue is of that rite where chieftains would throw gold and offerings into the lake (the El Dorado lake I believe). But don’t take my word for it. Really, don’t.

Not sure this is anatomically correct (though it may explain the facial expression).

A whole lot of bling.

The main parts of the museum are in both English and Spanish.

Saturday was Laura’s day off… kind of.  She was meant to go to class in the morning, but slept and did homework instead.  Really, they’re a crazily hard-working family!  Whereas I am super-lazy.  I’m just lazy in various countries.  In the afternoon we went for a drive and a little explore, including going up a small mountain and checking the view of Chia.

Today, finally.  Again I did almost nothing: I was arranging flights, tours, payments, more flights, more tours, more payments, and that’s pretty much it til the afternoon.  I went into central Chia and took a couple of photos, then walked back to Laura’s house.  I suddenly started craving being in a forest, then realised it was because I was barely breathing.  I couldn’t figure it out: there’s no way in the world a flat walk of a few kilometres should have me just about panting!  Turns out I’m at 2564 metres.  That’ll do it!

Tomorrow I’m off to Santa Marta, where I’ll be for a couple of days exploring the area before heading to Cartagena.  After that, Medellin, then a brief stop back here before heading to the Amazon (Leticia) for around five days.  Then one more day back in Bogota before flying back to Australia via Fiji.  Then (da da dummmmmmmm) real world.  Yikes!