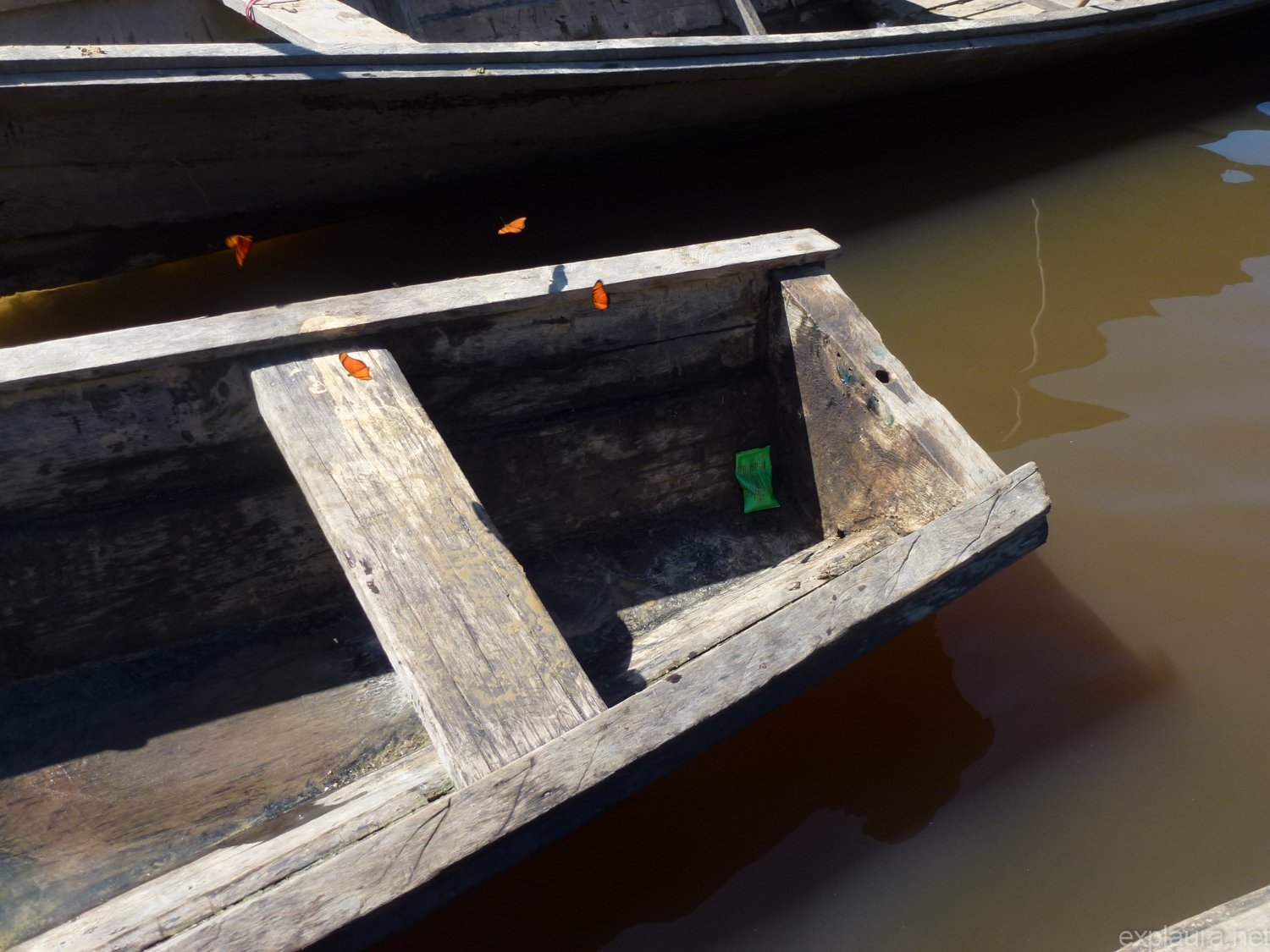 Day four of my Amazon adventure started off with tales of jaguars—as all days rightly should.  Over breakfast, Jairo told us about one of the two jaguars he’s killed.  I’ve already said that the Tacuna don’t hunt them, but I guess occasionally things go wrong.  The first one he killed was around five years ago, and this one around three years ago.  He was out hunting one day, caught an animal, and stashed it in order to go out hunting again (I guess he didn’t take his wife, in case she fell in love with a monkey?).  When he returned to the location later on, something felt wrong.  He closed his eyes and listened, and he turned and opened them only to find a jaguar just about to pounce on him.  I asked about jaguars by the way, and in this area they’re not black (like in the Jungle Book), but look more like cheetahs in their colouring.

Post-breakfast, it was up the river to the primary jungle.  And yes, I had Pocahontas in my head again.

The river trip itself was rather adventurous.  While near the village it was very calm, as we got further upstream the fact that it was getting close to the driest part of the year became readily apparent: despite whoever was sitting in front of the boat yelling out when there were logs, we inevitably ran over quite a few and nearly tipped over a couple of times as well (thoroughly freaking out poor Bambi).  At one point we came to some miniature rapids, and Guillermo and I got out and walked along the river shore to try and help—and it was still quite the feat.

After maybe an hour, we reached the point where we’d access the primary jungle.  We went hiking for a couple of hours at a fairly cruisy pace, learning about the jungle on the way.  We encountered one huge type of tree with a massive root system called a “pine de mondo” (pictured is a marginally different species):

If you get lost in the jungle, you give the base of the tree a bash and the resultant booming echo will indicate to you where the path is (as the sound carries along it).  We learned the next day that there’s a certain code to it, too.  So, for example, if you need help then you strike the base three times, and if you’ve landed a big animal and need assistance in carrying it then you strike four times.  The sound carries for up to seven hours at night-time.

Jairo and his trusty machete venturing into the jungle

(I should possibly also mention that none of the photos from this Amazon trip have been edited, other than cropping—it really did all look this crazy!)

I think my favourite thing about the whole area was the butterflies.  They’re everywhere and in the most amazing and iridescent of shades, including those huge blue ones.  Simply astonishing.  Later in the day in fact we saw a flock of butterflies (incidentally, apparently the appropriate collective noun is either ‘flight’ or ‘rabble’.  Rabble?  Really?  I mean, are butterflies unruly vandals?!).  It was exactly like the cloud of them that always whooshes around Pocahontas.

Next it was time to go for a swim to cool off.  We must have stayed in for at least 45 minutes, it really was sweltering out!  Then the three of us jumped back into the boat and found a fishing spot.

Recreational fishing disturbs me a little bit, actually.  It’s been proven fairly recently that fish do in fact feel pain, and I just feel so bad for the poor things!  (Who empathises with fish?!)  But we needed to catch some for the others to eat, so I tried to not feel sad whenever I caught a fish.  Which was a lot. About half the time, I’d have a fish within around ten seconds of throwing my line in: Jairo couldn’t believe it!  He said that fish must really like me, and I said it’s probably just because they know I’m not going to eat them.  I caught six in the end, while Guillermo caught his first and second fish ever and our resident expert got one or two as well.

A lot of the fish we caught were piranha.  Apparently there’s three types, and it’s the red ones that eat you.  I couldn’t help but notice that that’s mainly what we were landing (boating?), and so I asked why they hadn’t eaten us when we’d been swimming with them.  Apparently they’re a little like sharks, in that blood sets them off (but unlike sharks, they don’t mind eating humans).  At about this point in the trip, Bambi started getting cheeky with his translations: thus when I swore about ‘fucking piranhas’, he immediately translated it into Spanish for the giggling indigenous man.  By the next day, Bambi was even translating when I was insulting him, so that Jairo could laugh at him as well.  Healthy!