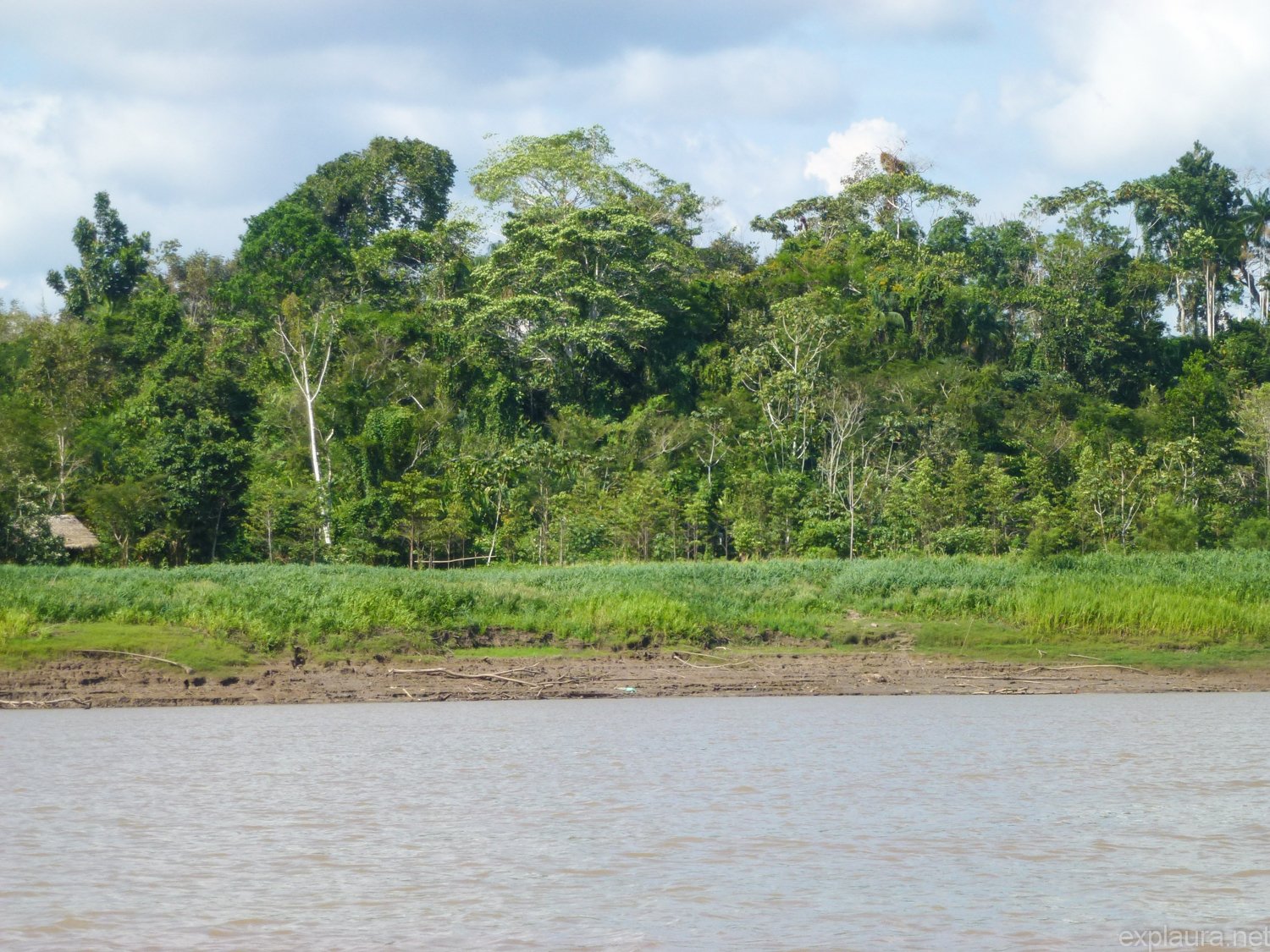 Early on day 2 of my Amazon adventure, my translator Guillermo and I found ourselves waiting by the water for ‘Tall Jairo’, the indigenous local who would be our guide for the next four days.  His arrival time drew closer, arrived, and passed, with no sign of the man.  Eventually in the distance we saw two boats travelling slowly together, and sure enough, it was our guy: he’d stopped to help a man who’d caught a fish half as big as his canoe:

Once the boat was de-fished, we popped in and headed just a hundred metres down from the town, looking for pink dolphins.  This species of river dolphins is peculiar to the Amazon, and as the name suggests, they’re pink.  They start off quite a normal, dolphiny colour when they’re young, but as they get older their pigmentation changes and they turn a light rose.  They also have a much less pronounced dorsal fin than ocean dolphins, but are otherwise more or less the same.  Oddly enough.

There’s a local myth about these creatures, which are never hunted.  It says that, somewhat like the selkies of northern stretches of Europe (Scotland, Iceland, Scandinavia), they can take human form.  Male pink dolphins in particular are known for changing into handsome men and luring human women into the water to mate.  (Also, why is this the second time in this blog having sex with dolphins has come up?!?)  So, if you see someone standing in the water, look to see if they have a belly-button: if they do, they’re human, but if they’re don’t then they’re dolphins in disguise and you should beware.

We spent several hours in the sunshine watching dolphins (yes, a little excessive).  I really don’t have any good photos I’m afraid, but here’s what they look like:

The dolphins were plaguing a fishing net stretched across the river, and boys were cruising around in canoes trying to scare them off by slapping the water with machetes.

We returned to Puerto Nariño for lunch and in order to visit a traditional Ticuna ~farm (Ticunas being the local indigenous people).  There was one big annex, with open walls and a triangular roof covered in plant fronds.  One small section of it was enfenced, and as we sat down in front of an elder, we learned all about it.

The fenced off section of the building reflected a practice of the local people, whereby upon menarche a girl would be sent into the cage (I can’t think of it in any other way) for up to three years.  During this time, she was to leave the enclosure for no reason, and it was absolutely forbidden for a man to even see her.  While interred, she would learn all of the traditions and culture of the tribe.  (This practice is still regularly performed, but usually for only ~a month).

Once her time was up, vegetable oils and waxes would be put in the girl’s hair and she would be dressed up.  The other women would get her drunk, and they would leave the enclosure together.  All of the men, meanwhile, would be barred from the village for the day.  The women started to dance around the girl, and as they did so, would grab the waxy substance in her hair and brows, pulling it out until the girl was completely bald.  Men would later join the celebrations, which continued for three days before ending with a cleansing in the river.  The girl had to keep her eyes closed for this whole time, and would only reopen them once she emerged as a woman.  (Any inaccuracies will have to be forgiven—obviously I heard this all in translation).

Next, the elder told us the story of the monkey Cheruku.  One day, a man and his wife went into the jungle to hunt for monkeys.  The man caught one monkey, and gave it to the woman to hold while he went back to hunt for more.  The woman, looking at the little monkey in her arms, loved it.  She said to it that if he were a human man, he would be very handsome and she would fall in love with him.  Upon hearing this, the monkey turned into a man and kissed her.  He then brought out a flute and played it, whereupon the lady shrank in size and jumped onto his back.  The monkey-man and the tiny woman then took to the trees, running off to become lovers.

The husband, meanwhile, returned to where he’d left his wife and couldn’t find her anywhere.  In a moment of intuition he looked to the trees, and sure enough, he saw his miniaturised wife on the back of the monkey-man as they fled.  He started to follow them into the jungle.

After many days, the monkey-man and the wife came to the shore of a huge river.  Here, there were lots of other monkeys, and as the husband watched silently from the jungle, they threw a net over the river and started to cross using it.  Once all of the monkeys were walking on the net over the river, the husband ran out from the trees and chopped the net free, so that it sank.  All of the monkeys drowned: the only survivor was the man’s wife, who was restored to her proper size.

The wife swam back to her husband and they headed into the jungle.  However, and perhaps unsurprisingly, they weren’t getting on very well.  The husband wasn’t particularly impressed that she’d run off with a monkey, and eventually he became so riled up that he left her in the jungle to find her own fate.

The woman, who had lost both her monkey love and her husband, was distraught.  She called after her husband again and again, but there was no answer.  Then, as it was a sacred time and people could still do magic, she turned herself and became the first macaw.  That’s why the macaw has such a sad cry: it’s that of the woman calling after the husband she’s lost.

Shortly after this we were at lunch and I saw that condensation from my water glass had made a picture which looked like a reindeer throwing up into the sky, so I told Jairo and Bambi that hey, I could do creation myths, too.  Haha hopefully you’re not storied out yet!

Once upon a time, the sun lived on earth like people.  It lived in the far north, with its best friend the reindeer.  One day, the sun and the reindeer were drinking at a lake, when the reindeer started looking at his reflection.  He saw what he looked like, and he compared it with the shininess of the sun, and he was so overcome with jealousy that he turned to his friend and ate him in one big gulp.  After a while though, he started to feel sick.  He felt sicker and sicker, until he couldn’t hold it in any more and he vomited the sun straight up into the sky.  That’s also why it’s still so cold in the far north: because the sun isn’t friends with the reindeer any more.

So that happened.  Jairo thought it was hilarious.

Post-lunch, we spent far too long sitting on the river once more looking at dolphins, then we made our way to a tributary.  About half an hour up this smaller water body, we came to San Martin, Jairo’s village.  The village has been there for about four years, and has a population of around 500 people.  It’s in the middle of the rainforest/national park, and the residents are local indigenous Ticuna.  They mainly occupy themselves with growing food, hunting and fishing.  There’s also a school and a small church.

The hut in which I was staying belonged to Jairo’s something-in-law.  It consisted of one large kitchen/dining area, where the whole family spent a lot of each day.  As did a range of wild-life: there was a dog, a couple of cats and a box of two-week-old kittens, some chickens and a particularly rambunctious parrot.  They aren’t yet sure whether the parrot is male or female, and are waiting to see if disappears one day (meaning it’s female), or brings another parrot back with it one day (meaning it’s male).  The hut also had an out-house and another room, where Guillermo and I slept.  This room had an adjoining small room where the family slept all together (the only room with a door).

There were always a few animals in the room, eating or playing on the floor.

Bananas in the corner next to the oven.

My floor-bed and Bambi’s hammock in the second room of the house.

After dropping off our things, we went upriver to go swimming in the river.  Yes, yes I did have the sound-track for ‘Pocahontas’ in my head for the entire trip (just around the riiiver bend—just aroundddd the river bennnnd!)  On the whole, it was a very inactive day, and I was getting pretty thoroughly grumpy (also quite lonely, as Bambi was the only one I could speak with and I didn’t know him that well yet).  I was actually considering cutting the trip short, but decided to sleep on it—and that was definitely the wiser choice.

After dinner, a Peruvian man arrived in the common area.  He swings by once a month with tablets and tupperware for the villagers to buy.  I was quite bemused: people kept shaking the tablets with this sort of scientific precision (not sure what that was meant to achieve).  A couple of the substances were unknown, but happily I was able to help with a couple of them (I worked in a pharmacy for a whole six weeks after finishing school in 2003, and thanks to my stupid memory memorised a massive number of compounds).  Most of the items were prescription only, and there were even some very, very powerful antibiotics.  The Peruvian obviously had no idea what the different drugs were used for: which begs the question, where exactly did the pills come from?

I was also bemused by the presence of a clock the man had for sale.  What possible need would anyone in the village have for a wall-clock?  Especially a one so elaborately decorated with a depiction of the Last Supper, and tinny yet upbeat hourly song.  Bizarre.

Our final activity for the day was to go for a walk through the village under the moon.  Jairo told us a little about getting married in the village.  Essentially, the ~chief has to give permission to marry.  Largely it’s no problem: in San Martin, there are three ~clans.  You can marry people from any other clan, as they’re not your family.  However, the chief’s permission comes into play if you want to marry someone from outside the Ticuna.  It used to be permitted to marry Europeans (etc), but not any more—and it was rare, even when it was permitted.  Also worth noting is that women do get a say in who their husband will be, unlike back in the day.