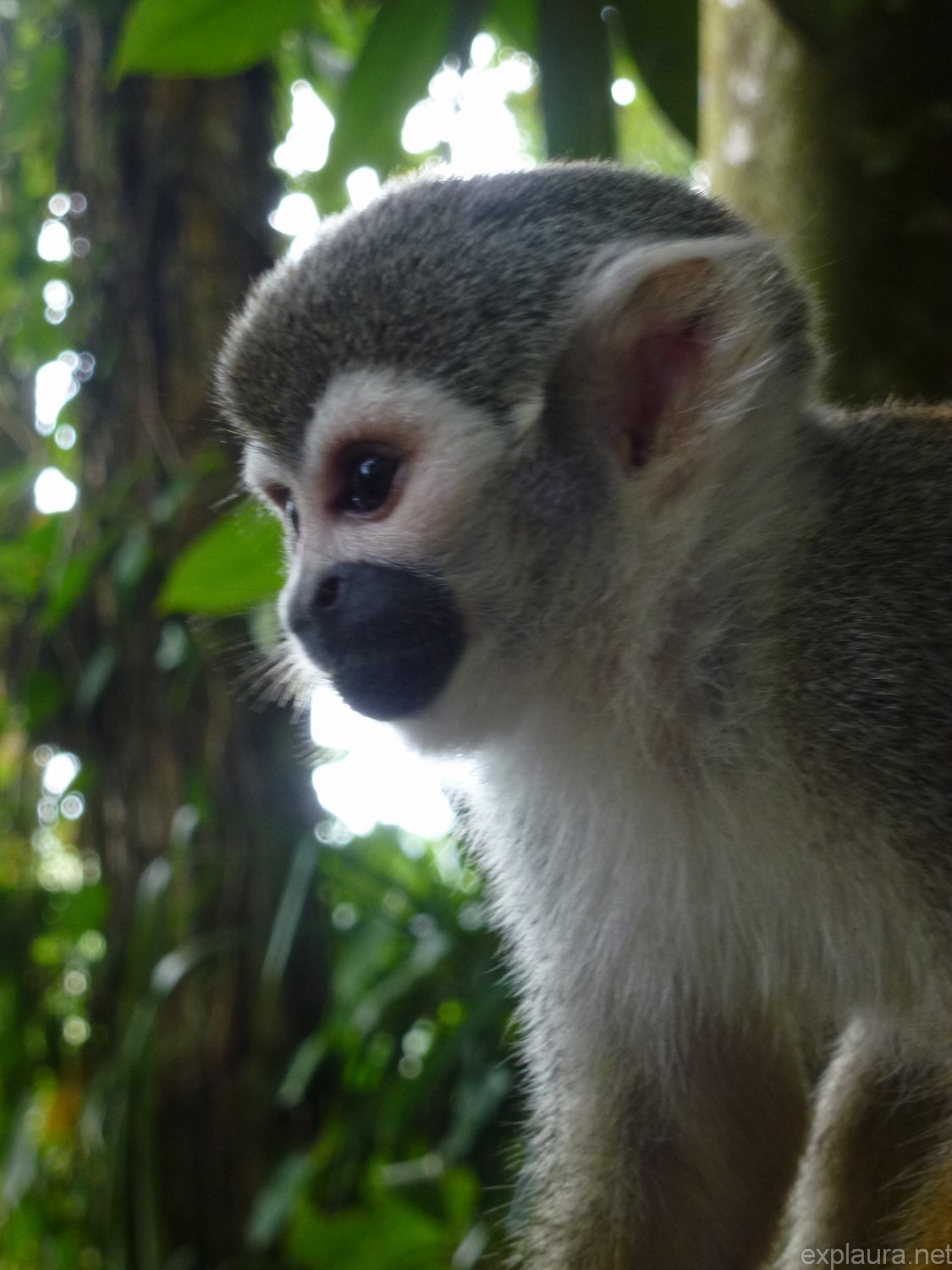 The final day of my Amazon trip, I was yet again woken at around 5am, when the town started to wake up.  There were the sounds of wood being chopped, a rooster crowing his heart out, and somewhere a baby crying.  Closer were the sounds of Colombian reggaethon music and sizzling cooking noises, which couldn’t quite serve to drown out the parrot’s raucous attempts to squawk along.

We were to leave by 6:30 so that Guillermo and I could meet the boat heading south, back toward Leticia.  Jairo took us out to the mouth of the tributary to catch it—naturally however, it was running on Colombian time, and so we had quite a wait as the canoe rested on the muddy banks of the river.  We were all pretty zonked so didn’t talk much, until Jairo suddenly asked me (via Bambi of course) whether I was married.  I said that if I were married, I don’t think I’d be in the middle of the Amazon by myself, and Jairo started giggling.  He made a joke that though I’m vegetarian, that’s one piece of meat I wouldn’t leave to the side.

The fast boat arrived, and G and I waved goodbye to our guide and headed off to Isla de los Micos—Monkey Island.  The island used to belong to a local drug-lord, who had a peculiar obsession with the animals.  He’d pay rewards to anyone who brought him monkeys, and this in turn started a booming trade in smuggling monkeys from the island at night-time, then selling them back to the owner in the day-time.  Sadly things didn’t exactly end well our monkey-obsessed friend: he was busted for growing drugs all over the island, and the government took it over eight years ago, converting it into a hotel and tourist destination.

I didn’t exactly know what to expect of this whole monkey experience, so was rather startled when suddenly the guide thrust a banana into my hand and something landed on me with a thump.

This type of monkey is called a squirrel (cappucino) monkey.  How super-adorable are they!  Of course, after the initial monkeys deemed me safe,  all of their friends came to join, until I had so many monkeys crawling all over me that I couldn’t breathe.  In between giggling hysterically, I couldn’t help thinking how ridiculous it would be if I drowned in monkeys on dry land.  Or on wet land, for that matter.

After a brief walk on the island, we caught another boat back to Leticia, where it had all begun just days before.  There we met with Alejandro, before Guillermo and I went wandering through the town for the rest of the afternoon.  Leticia itself isn’t a very exciting place.  We visited a couple of small museums (one with an amazing photo series of local indigenous peoples).  In one of them I picked up a photo that was for sale.  I turned it over and was flabbergasted: the guy who’d taken it was from freaking Tasmania, where I was born!  I mean come on, I was in one of the most remote corners of the world.  How ridiculous!

A couple of photos from Leticia:

Inside a small alley-wall with food stores.

I’m pretty sure it’s relatively self-evident what this photo is of.

The standard mode of transport in Leticia.

Lunch-time at a stall by the river.

Toward mid-afternoon, an epic storm rolled in, so we drank coffee, looked at photos, and talked about linguistics at great length.  Then it was time for me to go, and G presented me with my options: taxi to the airport, little electric car thing, or motorbike?  There was clearly only one choice, so he flagged down a motorbike and off I went.

I really enjoyed Colombian airports.  They were just so super-chilled, and the security was so, refreshingly relaxed.  For my flight to Leticia, I’d accidentally gotten my name wrong when I booked the ticket (I’m not even joking).  Yet—no problem!  Returning, I was meant to have proof that I was leaving the country in the near future, but the immigration official gave me a wink then the stamp in quick succession.  Easy.

Soon enough I was out of the jungle and back in Bogota.  I was pretty tired, and must have looked a little clueless.  Again though, I experienced the benefits of being in an extreme ethnic minority in the city: a man walked up to me at the Transmilenio (it’s like a metro, but it uses buses in special lanes instead), asked if I was going to Portal de Norte (around an hour and a half away), and showed me to the correct stop.  He knew where I was going!  And this was after the ridiculous kindness at the ticket window: a new system’s just come in and you need a card to use the system from some stops, so some random guy took me in hand and shepherded me through on his pass.

Of course, it’s not possible for me to have five entirely successful, disaster-free days, so once I reached Portal things went downhill.  I somehow got turned around and wasn’t at the usual bus stop, but I asked if the local bus was going to Chia and the guy sort of confirmed it.  What I wanted him to say was “Centro de Chia”, so I kind of ignored the fact that what he actually said was “Chia Centro”.  Completely different place.  So cue twenty minutes or half an hour later, and I’m peering out the window trying to pick landmarks in the dark.  I was pretty sure I was in the middle of nowhere, so I asked some people on the bus (in my terrible, most broken of Spanishes) if Chia was in front of us.  They looked at one another with chagrin and pointed behind us.  They then suggested I wait a few stops and get off, which I did.

I found myself on a very dark street, lit by occasional bars and occupied by a lanky and malcontented assortment of men.  I decided to try and call Laura despite the hour, because I really felt I should get out of there asap, and not try to catch a bus.  I found a stall selling minutes (they give you the phone and you pay for the time you use), and couldn’t figure out how to dial a Colombian mobile number (I am an idiot).  After trying seemingly every permutation of numbers, a guy in motorbike gear walked up and offered (thankfully, in English) to help.  We then successfully called through to Laura’s phone, but she was already asleep, and I didn’t have her house or her sister’s number—or her address, for that matter—on me.  So I pondered for a bit.  Motorbike guy meanwhile says to me that I should really catch a taxi, because it was very dangerous at night and I was by myself.  I couldn’t have agreed more, so I clambered into a taxi quick-smart, directed him to Chia, and used my hands to point out directions from there.  Result!