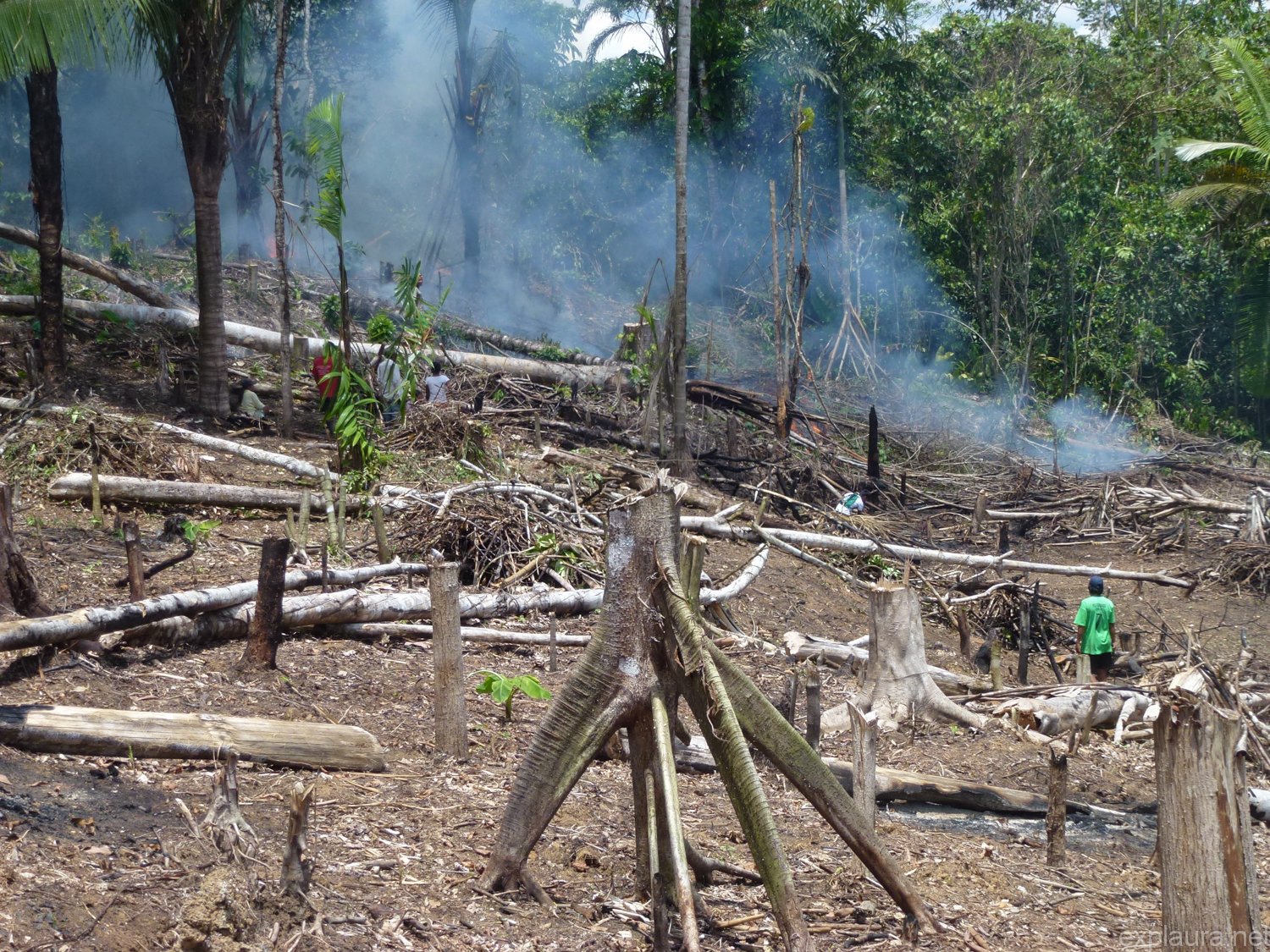 And the desperate attempt to not develop a back-log continues!

Day three in the Amazon was super-agricultural, and it taught me that I am equally bad at digging holes with a stick and at spinning flax.

Our first activity for the day was to head to an artisan’s workshop.  The crafts-person in question  was a lady called Maria, and she tried to show me how to spin twine from plant fibre.  The fibre in question is stripped from really big leaves, then boiled for five minutes and left in the sun to dry.  My massive audience all laughed at what I thought were valiant, if unsuccessful, attempts to spin the fibres together, with one lady saying that it’s easier than studying.  I categorically disagree!

While all of this was happening, I asked whether the tribe attended the conservation museum from two days before, in order to learn about environmental protection in the area.  I learned that they used to use a form of poison, barbascan, to kill fish, but had since stopped for environmental reasons (also, one girl attempted suicide by ingesting the poison.  I asked whether suicide was common in the indigenous people, and apparently it’s almost entirely unheard of).  Further, they used to hunt a lot of pelts in order to sell to the US etc, but now hunt only for food and the occasional extra bit for use in trade.

Next, we walked to the secondary jungle.  The tribe refers to the jungle in two parts: the secondary part is the slightly-tamed part, where they plant their crops, while the primary jungle is untouched and used for hunting.  The Ticuna practice ‘slash and burn’ agriculture, which is nowhere near as bad as it sounds.  Actually, lacking high population pressure, it’s one of the most sustainable forms of agriculture.  Trees in a patch are cleared and burned, providing a lot of nutrients to the soil for farming.  The patches are normally used for a couple of years before being left alone to regenerate, and a new spot is cultivated.  This avoids nutrient decline in the soil, has minimal impact on the surrounding forest, and produces high yield crops.

We walked to a chagra, a family-owned field which everybody was helping to clear for the day.  Jairo and Guillermo drank some juko beverage (cassava, I think?), which was rather alcoholic and tasted sort of like fermented natural yoghurt.  I only had a taste, but the guys had a couple of bowls each.  They claimed it was refreshing, but I’m pretty sure they were suffering from heat stroke or something because it was yuck.  Jairo meanwhile reminisced about a recent party he’d had, where they consumed 100 litres of the stuff among around sixty people.  Keen.

Once the guys had had their fill, it was time to get dirty, and we planted some plantain.  Plantain, which is like a big weird banana, is used a lot in cooking here, and can be prepared in order to be either sweet or savoury.  Using a big stick which had been trimmed by machete to have a point, we dug a hole in the clay in order to pop the plant in.  Each burned tree is enough for one or two plants.  Jairo told us that sedentary people ought never to plant yuka, or it won’t grow, as it won’t ‘move’.  I told him that the ones I planted should grow like crazy then!

It was time to get out of the heat for a bit of a siesta, and we headed back to the village to eat some fruit.  I tried a lot of interesting fruits there, actually.  The first one I renamed ‘baby alien fruit’: it was yellow, with white pulp inside, and the seeds in the centre looked exactly like the babies from the Alien films.  It tasted like passion-fruit though, and must surely be a varietal (granadilla).  We also tried some grapes, ‘uva caimarona’.  They looked like grapes with firmer skins, and had a gelatinous texture, but tasted more-or-less the same.  My favourite new fruit though was called guama.  It was shaped like a big cucumber (around a foot and a half in length).  You had to twist it to break the skin, which you’d peel back to find what looked and felt like white velvet.  This is what you ate: it tasted sort of like lychee, and I’m sure would be an amazing sorbet flavour.

We had a couple of hours to kill, so I headed to the river to cool down (also, it’d already been a couple of days since I’d had shower access, and slathing myself with a mix of sunscreen and home-made oil-based insect repellent had me feeling delightful).  Bambi then showed up, proceeded to put on a life-jacket, and was too scared to cross the river thanks to the current.  I’d seen the previous day that he really couldn’t swim, so started to teach him.  He didn’t even know how to float or tread water: no wonder he was freaking out.  He couldn’t doggy-paddle, and didn’t know how to kick.  So yes, it was quite the mission.

Once we’d spent a goodly time working on how to float etc, I gave him the life-jacket back to use as a kick-board and we decided to try to cross the river.  The current was really strong at the entrance side you see, while it was slow and shallow on the far side.  Anyway, a couple of metres in, he freaked out, seemingly spontaneously let go of the life jacket, and proceeded to start drowning.  I was right next to him of course, and had a moment of incredulity: you know how people who can’t swim are shown in movies, with the dipping under and then kicking off the bottom and flailing around?  As it turns out, that’s exactly what they do.  Once I got over my slight shock, I reached down and grabbed him and we got him back to shore to practice our survival strategies some more.  In the end, we got to the other side of the river and back: result!

That evening, we went for a night walk into the jungle.  I must say, I’m not sure there are that many situations in which I’ll follow a half-naked guy with a machete into a jungle at night-time, but this was certainly one of them!  We learned more about the Ticuna’s hunting practices: the other major predators in the area are jaguars and anacondas, but they’re not hunted.  On the other hand, snakes are killed on sight.  Usually the people hunt birds, deer, borugo and monkey.

One thing I found particularly interesting was when we stopped for a break and I was looking at the stars.  I’m always interested to look at the sky in different places (and as you can imagine, the air was very clear over the Amazon).  I remember when I first lived in the UK and would look at the sky at night-time, it really threw me.  Unlike in the Southern Hemisphere, where I know the constellations and they sort of have meaning, spatially at least, the stars in the North just looked like random spots on a canvas.  They’re more familiar now of course, but still kind of vague.  I figured that the Ticuna would have myths about the different constellations, that would be interesting and help me remember the stars in this part of the world, so I got Bambi to ask Jairo about it.  And no.  No star stories whatsoever.  I found it especially strange, given how connected to nature these people are, and that they have myths about so many other things.  Peculiar!