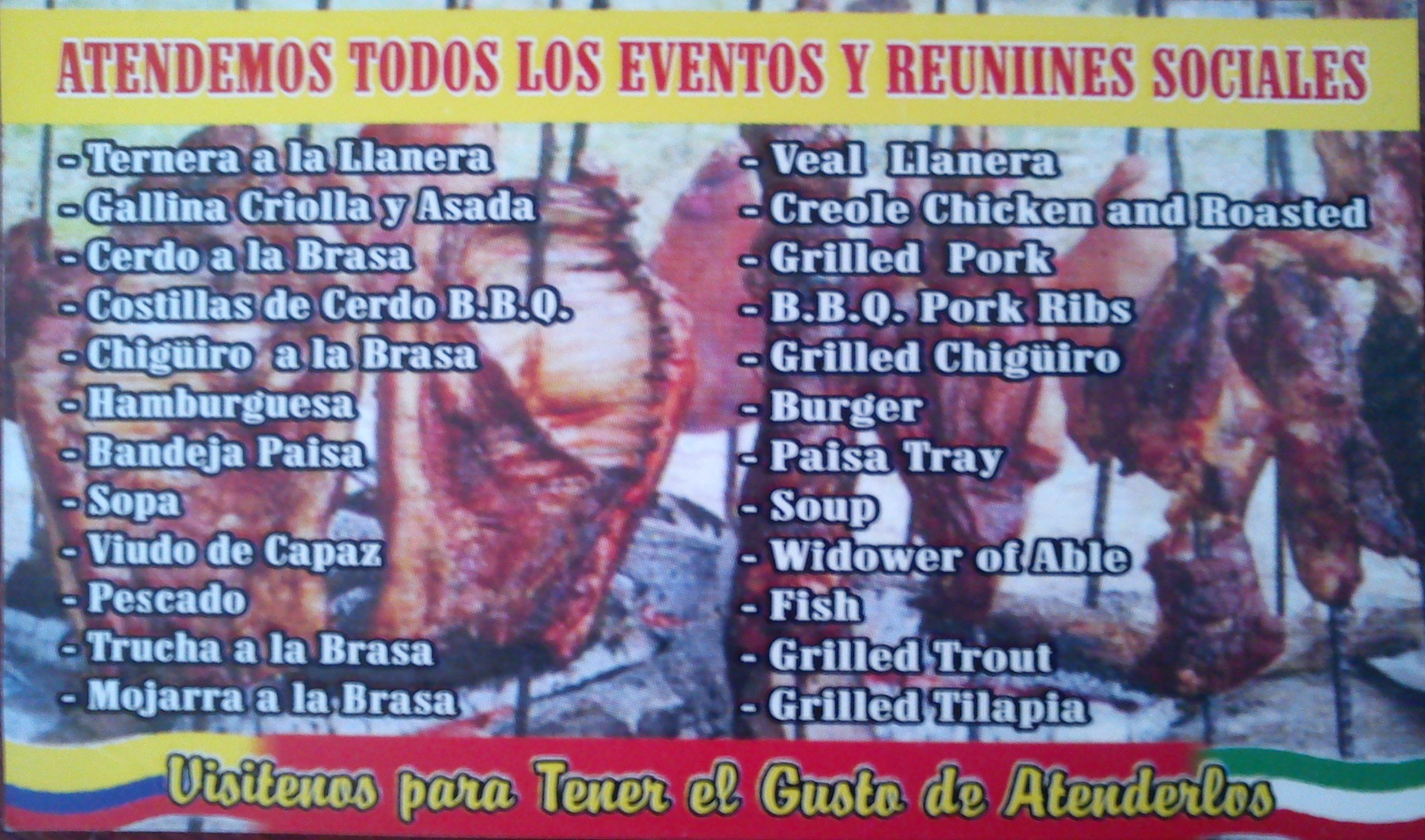 Pictured: the worst possible business card to give to a vegetarian.

Today’s blog post is named for a poster I saw at a bus stop yesterday: it had a man and a woman, and the slogan that ‘dialogue is better than assault’.  I’m not even sure what else to say about that.

After a day of what was essentially just sleeping on Tuesday, yesterday I ventured into the big wide Colombian world.  Laura had drawn me a map of how to get to the mall where I could exchange my euros, so that was mission number one.  It reminded me weirdly of this computer game we used to play in primary school, EcoQuest.  In that, you were plonked in a Latin American village, and your first challenge was to change money.  (Actually it’s terrifying how often my life reminds me of computer games I’ve played—my favourite series ever, Sierra’s Quest for Glory, depicts locations from all over the world: and by now, I’ve been to rather a lot of them).  So, off I went.  And I was terrified.  Almost to the point of passing out—I’m not quite sure why.  I suppose being in new surroundings are always stressful, and it’s particularly the case where you’re like this blonde giant on the street.  It takes a while to get used to everyone staring at you, and to not feeling threatened by it.  Haha I’m nowhere near as brave as people think I am!

I made it to the money exchange bureau, and after convincing the lady that I am not in fact American, and did not have US dollars, mission one was complete!  I wandered outside, intending on making my way to the bus stop for the town centre, and got distracted by a bus going in the other direction.  It appeared to have the name of a place around half an hour away, which Laura had suggested I visit, so on an impulse I jumped on.

Soon enough I was in Zipaquira, the ‘salt capital of Colombia’.  I’m not sure how old the place is, though I’m guessing around 400-500 years.  As I would later learn, this whole region used to be part of an incredibly salty sea.  It later dried up, and thanks to tectonic forces there were giant salt blobs created all over the place.  The salt blob (possibly not the technical term) at Zipaquira is 1km square, and 2km deep: so really, quite a bit of salt.  It was first used by the indigenous Muiscas people, and they became rich in its trade.  Later, the Spaniards arrived and mining got properly underway.  Part of this mine was turned into a cathedral—the Catedral de Sal.  I went to check it out, and as it was quite early and there weren’t yet any other English speakers there for a tour, went in by myself.  I learned a lot less, but it was way cooler: by walking slowly, I could avoid the lights automatically switching on, and with the music of chanting monks echoing through the vast caverns, it was super-atmospheric.

Soon after that, because I’m a complete newb, my camera’s battery ran out, so I don’t have any photos of the town itself.  Unfortunately!  I was really sleepy anyway—I’m going to use jetlag as an excuse, but in reality I need an almost embarrassing amount of sleep every day—so I headed back to the house for a short nap.  Haha four hours later..!

Poor Laura—the entire family in fact—work far too hard.  She gets up at 4-5:30 for work every day, and gets home at around 20:30.  It’s crazy!  Then, when she got home last night, her father had lots of questions for me about Australia and our culture, so she acted as translator: I don’t even know how her brain didn’t melt!  It was very cute though, her father said that I could come and be Laura’s sister, learn Spanish, teach English and marry a ‘nice Colombian boy’.  Haha I told him that they’re all too short :p