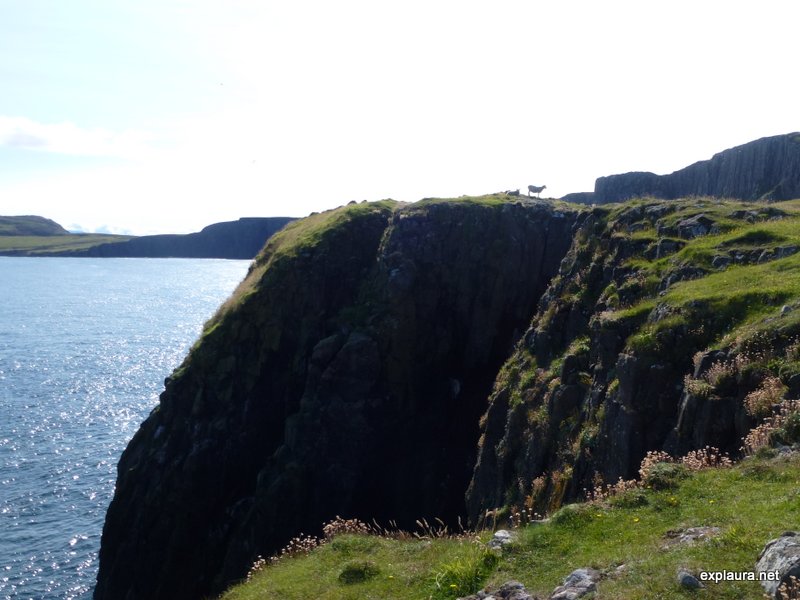 Edinburgh
A punch to the heart

The first time I woke up in the car, outside Sligachan on Skye, dawn was breaking over the mountains around me.  I looked up, thought to myself how good the light was, then opted for ‘fuck it, it’s too early’.

A couple of hours later, I was awoken by kids giggling.  They called out to their parents that there was a lady sleeping in a car, and their dad called for them to come away: then walked over to the car with his camera to take a photo of me.  Do as I say, not as I do?  Also, surely that’s creepy.  Though to be fair, I found the smiley faces traced on my window by the kids pretty discomforting, too (too much ‘The Mentalist’?)

Actually, that’s pretty much the only thing I ever worry about sleeping in a car: that people will wake me up and be creepy about it.  It occurred to me at the time that I’ve been sleeping in cars for far too long, and in a fairly outrageous number of locations around the world.  I feel like the quality of the cars is slowly improving though, so there’s that!

Now that I was awake, I ate a very nutritious (blatant lie) icing-covered muffin, then drove off to find some walks.  Ian had actually done me a hand-drawn map of Skye, and I was operating on that.  It was pretty good for the towns and things, but I didn’t do very well in finding the entrances to walks, so continued on until I was at the far northern tip of Skye.  I then went for a wander, being rather inconvenienced by a bull on the way (and as I was dressed in bright red, I was rather hoping that the ‘red to a bull’ thing wasn’t true), finally winding up on some very dramatic cliffs.

When I got there, I sat and had a ponder about South America.  The thing is, I haven’t exactly been looking forward to it.  In some ways, that’s normal for me: I have a tendency to book international flights, and then I sort of succumb to this feeling of inevitability that I’m going to go, and work it out from there.  Not this time, though.  I’ve realised over the past couple of weeks that I’m not recovered from Russia, and that what I really crave at the moment (other than food security!) is to feel safe for a bit.  Like not just physically, but emotionally: and I’m wondering whether ten weeks travelling through yet another culture, living out of a suitcase and having to deal with the exhausting tribulations of travel is really going to provide that.  As such, I’m considering just going to Colombia for three weeks, then cutting the rest of the trip short and heading back to Australia for a while.  I’ve said before that I miss having a real job, and the other things is, I’m off to India some time in the new year for a wedding, then Brazil in February 2015, for Lana’s 30th/Carnivale, so I could theoretically trek through South America then, when I’m a little more emotionally ready.  And that’s all discounting the fact that I’m also applying to do my Masters in Public Policy here in the UK, so will relocate back here next August ish if I get a scholarship (but only if I get a scholarship haha!).  Shrug, I don’t know.  I’ve emailed my travel agent and he’ll tell me what flight re-arrangements’ll cost.

Phew.  Anyway, by this time my frosted muffin was starting to wear off, so I went on a food quest.  I meant to go straight to Portree, but got distracted and ended up outside Dunvegan Castle.  I then realised that you had to pay to get in, so went into the gift shop and looked at photos to see if it was worth it.  I decided not: plus, there were a million tourists crawling around, and it was a bit late for good light, so I bought myself an impractical candle and headed onward.

I got back to Portree (Port Righ) and went into Tourist Information with a list.  Top of which was ‘where can I get a shower’?!  I also needed directions to the Fairy Pools, a series of small pools/waterfalls in the west of Skye:

Soon after the Pools, I actually completely stopped taking photos.  Everywhere I went I was surrounded by beautiful scenery, until I actually became quite exhausted with it all.  I was over-saturated!  It was weird actually: as I was driving around, the radio would occasionally come into reception.  It was full of news about alleged chemical weapons attacks by the Assad government in Syria, and I was worrying about my friend Reda, who lives in Damascus.  He always ‘likes’ my photos and things and wishes he could see these places, and I couldn’t help but wish he were in Scotland, safe and seeing everything for himself instead!

I later made it back to Portree for a fairly frustrating but worth-while shower (it was a button shower, and would only go for around fifteen seconds—the first few of which it was intolerably hot—before the tank had to refill).  I then drove down to the south-west of the island, in order to be close for the ferry the following morning.  I found myself a lovely spot on a cliff overlooking both the ocean and the mountains, so fell asleep to the sound of waves.  Not bad.

Edinburgh
A punch to the heart