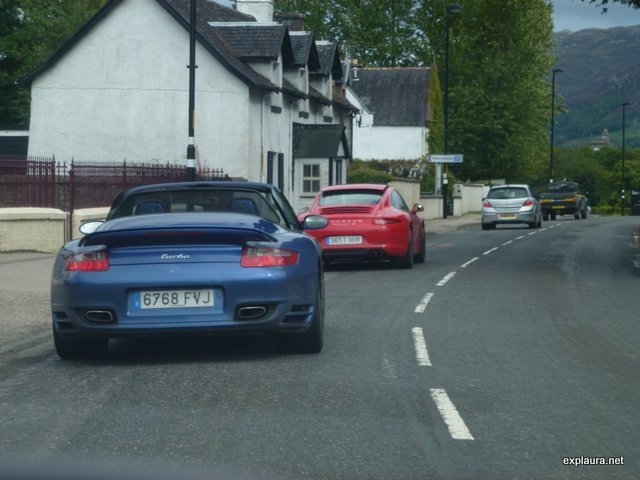 In the Skye
'You know what I mean?'

At some point in the night, I’d written ‘yellow fever’ in my phone.  Almost-unconscious-Laura is good for leaving me reminders.  So I woke up on the Wednesday morning and googled yellow fever vaccinations, as it’s one I’ve never had.  I then learned that it was necessary for South America, and that I needed to get it more than ten days before my arrival in the area, or it wasn’t valid.  Which would result in quarantine and serious travelling difficulties.  So, naturally enough, I then got on to calling all of the GPs (and even the hospital) in Fort William.  Then within thirty miles.  Then within a hundred miles, until I finally got myself an appointment in Inverness.  So, only half of Scotland away:

Throughout this process I was lurking in my hostel, variously giving and receiving abuse from Ian.  At one point he wandered in, asked if that was my hire car out the back, and if it was unlocked.  I threw him the keys and went back to trying to figure my life out.  A short while later he came in, looking smug, and said he had something to show me.  So, needless to say, I followed him out the back, where he showed me my ‘new and improved’ hire car: he’d managed to put all of the seats down, take parts out, and had made me a nest!  He’d put in a camp mattress, a million doonas (duvets/quilts for those non-Australians out there), a sleeping bag and pillows.  It was awesome.  So he told me to give it a go, and I started climbing into the boot, when it suddenly occurred to me that from the side, it’d look like the world’s most gentile kidnapping!  Much giggling ensued.

Ian’s niceness wasn’t even done: internally tutting (I’m pretty sure) at my apparent mass incompetence, he found me some waterproofs to take with me as well.  Amazing.

Later on, Jamie, who also works at the hostel, wandered in for a chat.  My initial conversation with Jamie hadn’t gone very well and resulted in my resorting to google rather than asking him questions.  Then, somehow, we got onto bestiality, and it turns out he knew all the stories.  The next thing you know, he’s telling us the story of dolphins being given hand-jobs and acid (article here).  He then said to me (and you’ll have to imagine this in a Scottish lilt) “see?  Ask me about hill-walking and I don’t know anything, but if you want to hear about wanking dolphins, I’m your guy!”  Hilarious.

At this point, Ian asked me whether I’d seen his dinosaur yet (I’d showed him mine, ‘Fluffy’, a  large plastic velociraptor that was given to me by two of my students in Finland).  I said no and went to go and have a look—only to find out it had been dino-napped!  He was a bit devastated.  When I left the hostel later on, I left Fluffy at the back door as a present.

The trip to Inverness was fairly uneventful, if beautiful.  I managed to get yelled at by a coastguard at one point and saw quite a few wonderful cars (eg the ‘featured image’ for this post!), but that’s about it.  Then I got to Inverness and got hopelessly lost for quite a long time, before finally—and thankfully!—making it to the doctor’s for the jab.  Afterward, I asked them where I should go for lunch, and was told the ‘Castle Cafe’ and given some directions.  Both the name and the directions turned out to be a wee bit wrong, but I eventually managed to figure it out.  I’d been told to order the ‘macaroni and cheese’ as it was ‘to die for’, and given that I’d never heard that particular phrase used in conjunction with mac and cheese before, gave it a go.  And my goodness do the Scots know how to do carbs.  My meal came out all of two minutes later, and it was a huge pile of chips on top of an epic mess of macaroni and cheese.  ‘Yes’ to balanced meals!

It was then time for the epic drive to Skye, which took hours longer than it should have because of all of the photo stops.  I’m again intimidated by the sheer number of photos I’ve taken so will do a ‘Scotland photos’ post later on.  For now though, I’ll leave you with just one (completely unedited!) photo of Eilean Donan Castle:

In the Skye
'You know what I mean?'