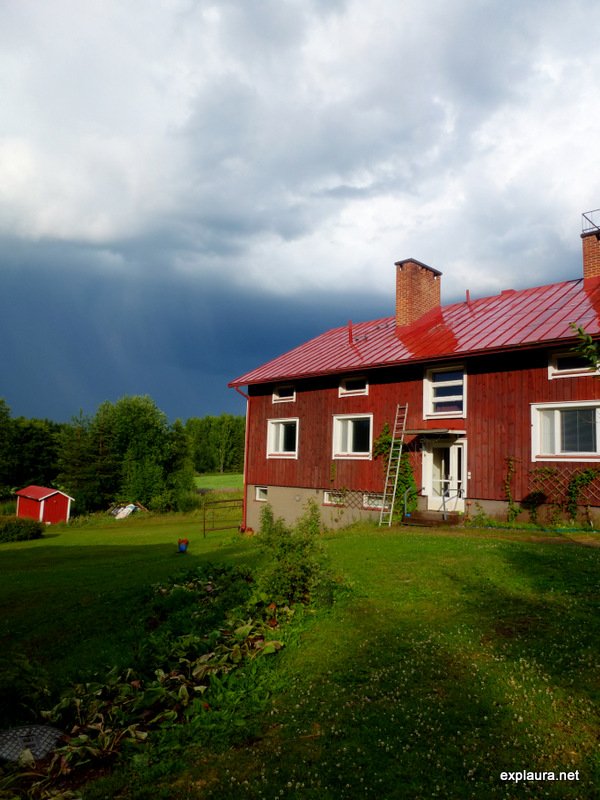 I’ve been working at the camp in Finland for less than two hours, and I’ve already made a girl cry.  New record?  I discussed it with Michael (who I worked with in St P), and we’re putting it down to Russian mentality.  This girl has “always” been in group four, but I put her into group three.  We gave her a second test and she couldn’t do it, so ran away crying.  She feels like she’s been demoted, like we’re saying she’s not very good, and can’t understand that groups, like levels of English, can shift.  We ranked the students and she didn’t fall in the top 25%, so her group was allotted accordingly.  I made every possible reassurance about her changing group if she did well, but we’re not going to move her up  just because she cries at us.

Finland itself—or ‘fake Russia’, where I’ve found myself—is lovely.  I flew in from Athens (on a plane with wi-fi !) and spent a few exorbitantly expensive hours in Helsinki before catching the train (again with wireless) north.  It’s gorgeous: I’m in a national park, and there’s a forest outside my window.  Note use of ‘my’ window—I’ve got a room to myself!  Get excited!  It’s teeny-tiny (at my request), and reminds me of the ship I used to live on.  It even has a little desk in the room, so I have somewhere to work.  Happiness is!  Incidentally, the picture for this post is of the building I’m staying in.  Not bad, right?

I say ‘fake Russia’, and it’s because it really is.  I’ve awkwardly re-entered a world where doors are opened and bags are carried for me.  It’s also a world where it’s normal to eat at 11pm, go to bed late, and obsess over things like saunas: to the point where saunas are scheduled at 4pm for all of the kids here on camp.

After breakfast (which was an hour before lunch, so we quite literally ate them both at the one sitting), Michael and I discussed Russia at quite some length.  We talked about the mindset at companies like EF, and get this: you’ll recall I did a video with Michael a few months ago.  Somehow (I have no idea how), the fact that he’d done the video with me got back to head office, and he got a phone call with a shocked voice saying they couldn’t believe he’d compared Russia to Afghanistan.  It then later came up at his performance review, where he got a ‘0’ for team-work purely because of the video.  So being critical of certain aspects of Russian society means that you fail at team-building as an English teacher.  It’s like being spied on all the time: most people play this game of being constantly careful, hiding things and trusting few.  I on the other hand said exactly whatever I liked to the point where people were shocked and didn’t know quite how to deal with it—as when I told my manager that working for EF was the worst mistake I’d ever made in my life.  And yet they wanted me to stay?!  Right.

On the topic of languages and the teaching thereof, the kids here have been told I don’t speak nor understand Russian, even though my boss knows that I do (otherwise he probably wouldn’t have briefed me in Russian).  I’m not even meant to speak in Russian to the other staff, in case the kids find out that I can understand I guess.  Do you have any idea how hard it is to pretend not to speak a language?  I automatically respond to questions and laugh at jokes.  I’d make a terrible spy.

I’m going to finish on a more general comment about Finland: I think I’ve found my genetic home.  I look so much like Scandinavians, it’s ridiculous.  More than that though, this place is so natural to me that I feel like I’ve lived here in another life.  It’s like I’ve walked into a jigsaw puzzle and fitted in perfectly—just another missing piece of sky.  It’s very peculiar.