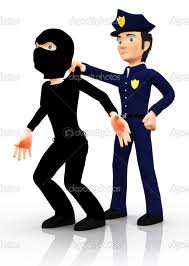 I just ended up nearly literally under arrest.  Or, if I’m exaggerating slightly less, under an arrest.  Because there’s no other way to start a Saturday morning.

This morning I got up and was told I had to change rooms at the hostel, so packed up in a flurry before heading out to try for the walking tour again.  I made my way into the city and found the tour group, but there were at least thirty million people (using Laura math, whereby ‘million’=1), so I decided to give it a pass.  I then walked to my hostel from last year again, and on an impulse, asked how much it would be to stay there for the next couple of weeks.  Even ignoring the room move/s at the hostel I was already at, I wasn’t very happy with it: it is so dirty.  Also, on my bed someone had written ‘Great night out!  12/07/82’, and I’d believe the mattresses (read: springs) were at least that old.  I have to take better care of my back than that, and after only four days on those mattresses, it’s starting to flare up.

Anyway, the lady said that it would be 26 euro a night, which is actually more than my entire daily budget combined.  She then said 25, and I said that i’d have to leave it, and not to worry about it.  She asked what I would be willing to pay, and I said that though my current hostel was really dirty, it only cost 10 euro a night, so i’d just have to stay there.  She then offered 18, and I said thank-you, but I really couldn’t, and I left the hostel.  I got as far as five metres away before I found a kitten to play with, and then on further impulse went back and asked to see a room.  Long and the short of it, I’ve ended up in a 6-bed apartment room with its own really nice bathroom and kitchenette for 15 euro a night including breakfast—so basically, that lady’s my hero.  Also, they have their own restaurant with cheap food, so it becomes viable once more 🙂

I got back to my old hostel before 11am check-out and said that I was leaving, grabbed my stuff and headed for the metro.  The subway cart was completely packed and I couldn’t figure out why—and more to the point, we weren’t going anywhere.  There was a woman with a radio walking up and down the platform, looking into all of the carriages, so I figured she was looking for something dodgy.  Then, of course, she stops outside my carriage door and gives a nod to a burly Greek policeman, who comes bustling into the carriage and heads straight for a guy in the corner, a couple of metres from me.  Naturally I had no idea what was happening, because it was all in Greek, but I could see the police-man question the guy, who looked Nigerian or some such.  The guy was becoming argumentative and the policeman was becoming rougher, then they were both standing up and started jostling.  The suspect staggered back onto me, and so I tried to be small and stay out of the way.  By this time, most of the people in the carriage were yelling (I wasn’t sure if they were angry or just being Greek), and it was getting rowdier and rowdier.

Finally, after a bit more pushing and yelling, the policeman had the guy in handcuffs, and they passed by me out of the carriage.  I decided it was now safe, so started asking people if they spoke English so I could find out what on earth had happened.  Apparently, the suspect was… suspect… in something, and the policeman had asked if he could search him.  The suspect said no, and also refused to go with or co-operate with the officer.  Then, after the first bout of yelling, he agreed to go, but tried to leave his big garbage bag full of stuff on the train, which set off the second round of yelling and pushing.  Who even knows?!

People always tell me to ‘travel safe’, but i’m seemingly incapable of staying away from trouble.  Haha at least I can now consider it ‘blog material’!