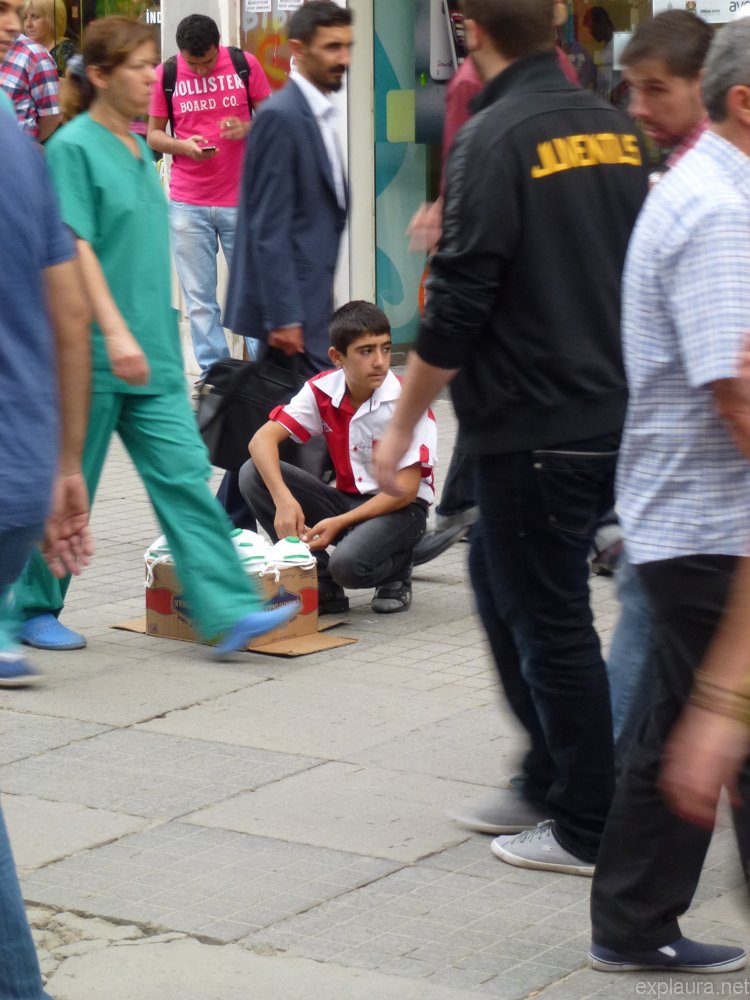 A quick update from Istanbul
The probable incidence of larceny

An excited Russian man came running over to me at the conference before.  “Лаура!” he said, “you’re from St Petersburg!”

“Well, not exactly,” I replied.  I don’t know exactly how he thought the name ‘Laura’ could be Russian, but apparently he was trying to find out if there was anyone else from Ze Motherland at the conference, and someone pointed me out.  I’m curious what brings him here actually—Russia seems to be entirely lacking in any kind of environmental movement.  I’ll have to ask him tomorrow.

The conference so far has been a bit blah, but I’m quite interested to hear Al Gore’s presentation tomorrow.  It’s rather disconcerting actually—the presenters and staff who’ve mentioned him so far have spoken of him with a tone of reverence, as though he were a god or something.  They continually laugh deprecatingly, saying that “well, I’m not Al Gore!”  I’m not sure they realise he’s just a dude, ex-US Vice President or no.

Turkey has continued to be rollercoaster-like.  After yesterday’s post, I went for a walk to buy some tops for the conference.  The area around Taksim is infinitely more likeable than that around Sultanhmet, where I stayed last year.  There people were constantly creeping on me, but here it’s much more European.  It’s actually quite cool.

After making my purchases (in the end, at a Russian chain store… of course..!), I decided to go and check out Taksim Square, site of the protests in Istanbul.  It was very interesting.  Most had gas masks of various calibre, which is totally reasonable as they’ve been gassed by the police several times by now.  There was a whole range of people, from seemingly all backgrounds and of all ages.  There were quite a few young people, but also some from older generations.  Mixed in were the normal homeless people.

The vibe was quite difficult to describe: it felt partly like a party, but with violent undertones.  I don’t think I’ve ever fully understood the word ‘thrilling’ before this.  Walking through the park, there were people everywhere: some chanting, some singing, some chilling in their tents, and others sitting around eating with friends.  As it got later, there were more and more grim-looking people filing in, and fewer people just investigating.  Camera crews were everywhere, of course.

People protest in the square by two Turkish flags and a huge image of the prime minister:

After visiting the square, I returned to the hostel for an early-ish night.  All was fine and well until 1:24am, when the lady who works at the hostel came to wake me up and tell me I needed to move rooms.  You can imagine how delightfully happy I was.  I had no choice, so got out of bed to start packing my stuff.  A minute or so later, as I was getting changed (chances of my walking around the hostel in my pjs are approximately zero), the cleaning lady walked in, leaving the door open for the world to see.  She then proceeded to sit down and watch me pack, which was a dangerous place to be.  When I left the room, she didn’t actually even change the bedding, despite the fact I’d slept in it all day—just left it for the guys who were moving in.

The hostel lady cornered a guy who was walking up the stairs to help with my luggage, and he said that was fine, but man did he bitch and moan.  My bag’s only just over 20kg, but you would have thought it weighed three times that.  As he was resting every few steps and complaining bitterly, I couldn’t help but think, ‘well, you’re certainly not Russian!’.

A few hours later I got back to sleep, then reluctantly woke to my alarm a couple of hours later again.  I’d decided to go and get my hair done before registration for the conference opened, as I’ve been feeling completely blah lately: I figured that maybe looking like ‘Australian’ Laura would help me start feeling like her again.  And that’s what credit cards are for, right..?  (In other news, I feel like I’ve figured out how people get into debt cycles: I’ve had so little money for so long now, that it’s become like an abstract concept.  I’m putting everything on credit and will deal with it later…. oh, healthy financial situation.)

Anyway, I got down to reception, at which point the lady told me in a rather aggressive manner that I was going to have to move rooms again.  “Are you fucking serious?!” I replied.  (You may be sensing a morning theme with me—don’t ever talk to me before at least 10am).  I told her I’d return to move my stuff after I’d had my hair done.

It seems that having my hair done is something I do when in Turkey, as I had it dyed last time too.  Happily, this time I didn’t end up as white-blonde, and he did a great job cutting it, too.  Who needs language, right?  Getting your hair cut in a country where you don’t speak the language is invariably interesting.

Time to do some study before bed!

A quick update from Istanbul
The probable incidence of larceny