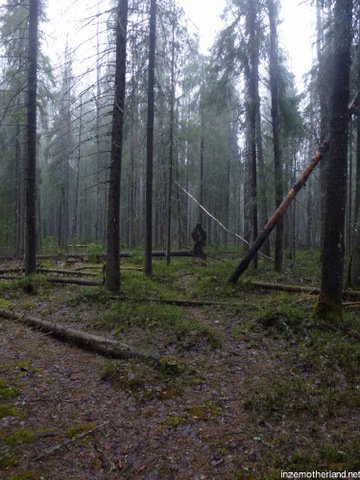 On forgetting
In the woods

The May long weekends have continued here in Russia, and I decided to spend the bulk of the second in Petrozavodsk.  The city itself is located on the shores of Lake Onega—the second-largest lake in Europe—in Karelia, and around 750km north-east of Petersburg.  According to fairy-tales, Karelia is where Russia’s most powerful wizards (wizard sounds like ‘mug’) came from.  My intention in going there was to see some of the wilderness, including Kizhi Island, a UNESCO-listed site.  That, however, didn’t happen: there’s still too much ice in the lake, so the ferry wasn’t running.  Either way, it was a very relaxed adventure!  (Oxymoron alert?)

Getting to Karelia wasn’t too difficult.  I took a taxi to the train station after work, and as it turned out, the driver spoke some English.  More than a little, actually.  He used to be a commercial sailor, and had even been to Australia—the second Russian I’ve met who’s been!  We talked about Australia and about the Russian economy, as you do.  He said that there’s “really really lots of money in Russia, really really lots, but there is no business”.  I asked him whether the money is in Russia, or in Cyprus, and he laughed.  I gave him a kangaroo toy 🙂

For the overnight train, I decided to take a ‘pleb-class’ seat (плац-whatever), which was fine.  I don’t really understand why anyone would pay four times as much to be in a room with fewer than forty people..!  Haha the only thing was that at around 1:30am, when I was fast asleep, the people in the bunks next to and below me all changed.  I’m prone to sleep-talking at the best of times, and on this occasion was awake enough to be sleep-moving, too.  Unfortunately, I dreamed that someone was robbing me and I needed to kick them in the head.  So I may or may not have been kicking the people around me.  Oops!  I then woke up all a-splutter and made accidentally eye-contact with a Russian guy who was staring at me (and who could blame him, given the random violence).  He was staring at me in that strangely feral-cat-like way that Russians seem to have: it’s like something other than human.  The high, broad cheek-bones don’t help dispel the impression whatsoever.

I finally got to Petrozavodsk and headed to the hostel.  In the directions they said to ‘not be scared’ of the fact that it’s at the end of the bus line, or that the building next door is burned to the ground.  Haha so I didn’t.  It looked as reputable as it sounds—but it was actually good.  Clean, and with lovely staff.  I had long conversations with the people working in the hostel, and in fact the only other person in my room was a very sweet guy who worked at the hostel in some capacity-or-other.  It was also the first time (other than Vyborg) I’ve slept in a bed in around 3 months, and omg did I sleep well.  And constantly.  Despite the smell in the room actually, which was a lot like the Front Valley locker room in a Thursday morning in Spring… and for the general population who don’t know how awful that is, imagine alcohol-sweat, vomit and long-damp shoes.

The weather report predicted rain later that day, so at the absurd hour of 8am I set off for town.  On the way I got side-tracked by an anonymous path into the woods (and am incapable of resisting such) so got to see a happy squirrel and some kind of wood-pecker!  Yay :).  Eventually I made it to town (I was around 6km out) and thence to the shores of the lake itself.  I made friends with a flock of pigeons after realising that the loaf of bread I’d bought to make lunch with was stale, then followed the noise to the Victory Day celebrations.

Victory Day—May 9—celebrates Russia’s victory in the Second World War.  It’s kind of a big deal.  I went and listened to some bands playing, watched all of the military and police processions (including those of the schools etc): so far, so normal.  But then lots of young athletes started coming out and doing demonstrations of soccer, volleyball, sword-fighting: you name it!  It’s not something you’d see in the West, but here it seemed an integral part of the ceremonies.  Here’s a few snippets:

I was pretty wrecked by this point, so went back to the hostel for what turned out to be a 3-hour nap, did a few hours of organic chemistry revision for uni (LSE, not here), then caught a marshrutka back into the city for some food and fireworks.  The fireworks were epic actually (as you can imagine, in a country seemingly lacking OH&S legislation), though I think my favourite thing about them was that there was this one guy who was shouting давай the whole time (like ‘come on’/’let’s go’/’keep going’ sort of).  It was hysterical.  Davai-guy kept yelling it for the whole 10-15 minutes, and then continued yelling just random things for as long as I was within hearing range of him.

The next day’s adventures mainly consisted of conquering Don Quixote and the woods.  The weather was fairly miserable, but how often do I have the chance to wander in the woods in Russia?  So, I put on my board-shorts and snowboard jacket (not even the least practical thing I’ve ever worn hiking) and walked a couple of hours in.  It was great, though I was paranoid about brain-encephalitis-bearing ticks, so checked my legs constantly.

I love the wilderness and animals here: it’s how it is in story-books.  Squirrels, dark green, the smell of the undergrowth: fantastic.  Of course, wolves and rapists are significantly more likely than fairies and adventure.  Such is life I suppose!

Anyway, that really is more-or-less all I did in Petrozavodsk.  I took lots of photos of course, did lots of walking, heaps of reading and a sizeable amount of homework, too.

In a brief life update, I’m more-or-less sorted out: I’ve arranged to work in a hotel in Greece for about 5 weeks before heading to Finland.  I’m a little concerned tbh, because it’s 6 hours a day 6 days a week, and working in return for accommodation in the hotel plus breakfast (no money): I don’t want to leap from one bad situation to another.  But beggars can’t be choosers, as they say!  At least it’s right on the beach, and I’m not trapped or indentured like I’ve been here.  Plus the work sounds pretty chilled out.

After Greece I’ll be teaching in Finland for four weeks, then the UK, then off to Latin America of course.  I think I’ve rigged it so I won’t even die of starvation… winning!  🙂

My hostel in Petrozavodsk: Hostel-Kizhi

On forgetting
In the woods