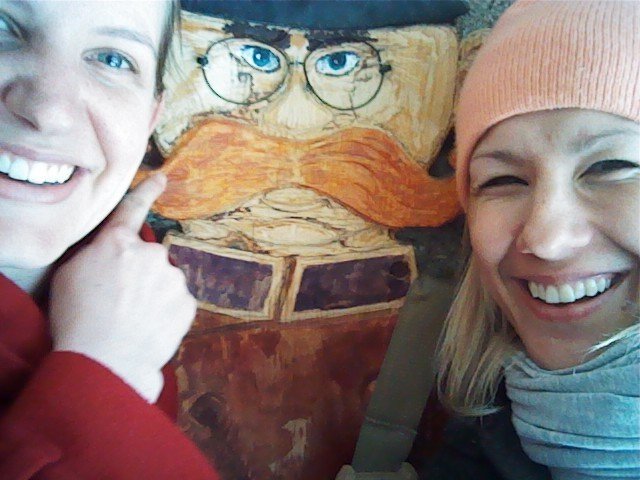 In the woods
Chicken brain.

Nastya and I went on an adventure to Выборг (Vyborg), a couple of hours north of Petersburg.  In keeping with my expectations of Russia, things got random. I am not, and have never been, a morning person: so when we got on the train, I blew up my neck pillow, put on my eye mask, and tried to go to sleep.  Then a salesman came out.  It’s pretty normal to encounter a range of salespeople on local trains in Russia, selling everything from magazines to potato peelers.  Not this guy, though: this guy was selling balloons.  Awesome balloons.  Balloons “which you can blow up 50 times and then let them go and they make a funny sound”.  They can even travel up to the third floor of a building when you let them go!  (So evidently, they were nothing like every other kind of balloon..)  Later that day we saw a couple walking around with one of these vaunted balloons, and they also look pretty much like an giant inflatable… well, you’ll get it:

After arriving in Vyborg, we headed straight to a pub for the essentials: coffee and food.  When ordering my omelette, Nastya started giggling at me and I wondered why: she tried to cover by saying how it’s great that i’m so unusually conversational in Russian, but then later she confessed it’s because I say ‘cheese’ funnily.  I can normally say the letter ‘ы’, but when it’s between ‘с’ and ‘р’ I just completely fail!  I spent the half an hour after she told me muttering cheese to myself haha.  And I had the time to spare: we got a little lost and wandered around the town for quite a while.

We were finally presented with the sight below:

It’s at the hostel’s address and had a sign saying ‘hostel’, but strangely, was not actually the hostel.  The ‘hostel’ sign was to indicate that the hostel was not at that door, but at the next one.  Of course!  So intuitive!  Wanders then resumed.

There are always people posing around you in Russia. This lady’s in front of a statue of Peter the First.

We next climbed up to check out Peter from a little closer, turned around, and were confronted by this guy in Russian-flag-themed ushanka and saluting Peter:

We then proceeded to Monrepo Park, which was rather nice.

Nastya tries to climb onto the bridge railing.

We saw a guy running helter-skelter through the park with a baby in a pram.  It was incredible.

We also saw three girls heading into the park, presumably to go for a bit of a hike, in super-appropriate clothing and footwear:

On the way back into Выборг there was a rather picturesque bridge covered in padlocks.  It’s a Russian tradition to use these ‘love locks’ (thanks for that, wikipedia!) to symbolise everlasting love, and the peoples’ names are usually written on them.  All towns have a dedicated bridge to be used for the locks, but you can find at least one or two on most bridges.

Dinner was in the appropriately-named Сова cafe, as the whole place was filled with owl statues and decorations.  The lamp fittings, the carpets, everything was owl-themed.  When we paid the bill I left a crane I’d made from a serviette, and the waitress instantly crushed it.  Maybe owls don’t tolerate avian competition.

While we’d been having dinner, Nastya turned to me and said in a very serious and slightly condescending voice (imagine: to a misbehaving and slightly senile person) “Laura.  You’re just making random noises.”  Haha and it’s totally true!  Since, I’ve noticed that half the time I don’t bother using words in either Russian or English: I just make grossed-out sounds or say ‘meh’.  Winning at conversing!

Back at the hostel, we encountered a super-creepy dude in the kitchen so hid in our room instead.  Also in that room were dresses looking like this:

Role-playing is massively popular in Russia, and while Nastya was off brushing her teeth I subjected the poor owner of the dresses to a million questions.  She was in Выборг putting together some kind of catalogue using them… how peculiar.

The next day was verrrry lazy after our epic walks of the previous day, and like all good days in the life of adults, it started with milk and chocolate-chip cookies.  Nom nom nom!  While eating them we watched this weird comedy show, where the host wore this amazing combination:

We meandered for another good five hours.  It’s always interesting talking to Nastya, as while she’s obviously Russian, she’s also lived in the Netherlands and the US, so has a very unique insight into Russia.

My brain’s a little fried as I write this on the 5th, as yesterday I went gulyaying with Liza and Nastya and was speaking almost entirely Russian for 8 hours (hence the length of this blog post: I have zero interest in studying for my Russian exam right now!)  Lizard’s English isn’t very good, so.  Happily, I’ve had some strange break-throughs in my Russian lately.  Three weeks ago I felt like I’d never get anywhere—and in fact felt so bad about it that I counter-intuitively didn’t go to class that week.  But while walking through Vyborg I saw a sign and couldn’t figure out why they’d written the exact same thing twice: I had to make a conscious effort to recognise that “Kamennogorsk” and “Каменногорск” were actually written in different alphabets.  Likewise, I glanced at Nastya’s phone when we were on the marshrutka back to Piter, saw “рг” and knew it was Thursday (четверг).  So at least my studies of a fairly useless language are going well..?

Finally, Nastya put me onto these two stories: naturally, each took place here in ze motherland. 1. A man gets stuck in a garbage chute after trying to run away from his girlfriend 2. A hair-dresser feeds a would-be burglar viagra and keeps him as a sex slave.  Enjoy 🙂

Our hostel in Vyborg: Vyborg Hostel

In the woods
Chicken brain.