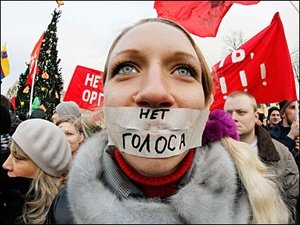 I am about to show you, in less than 200 words, how completely inappropriate for me this country actually is.  Here’s an article published on the NY Times website a couple of days ago:

The head of the Russian Orthodox Church, Patriarch Kirill, said Tuesday that feminism was a “very dangerous” phenomenon offering an illusion of freedom to women who should focus on their families and children. About three-quarters of Russians consider themselves Russian Orthodox, and Kirill has fostered close ties with President Vladimir Putin, who has portrayed the church as the guardian of Russia’s national values. “I find very dangerous this phenomenon, which is called feminism, because feminist organizations proclaim a pseudo-freedom of women that should in the first place be manifested outside marriage and outside the family,” Kirill said, according to Interfax news agency. “Man turns his sight outward, he should work, make money. While a woman is always focused inwards towards her children, her home. If this exceptionally important role of a woman is destroyed, everything will be destroyed as a consequence — family and, if you wish, the homeland.”

God forbid I should have aspirations outside the home.  What a dreadful concept!  In fact, just on Tuesday in Russian class, we learned the phrase for ‘old maid’.  Our teacher explained that whereas now it’s used to describe a woman more than ~25 and unmarried, in USSR times it could be applied to someone who was 20-22.  Man, by Soviet standards I’d be a crone.  But at least now I understand why divorce rates in Australia and the West are so much higher than in Russia—it’s due to the break-down of society, and because people get married to feminists.  Oh, oh, wait—you mean it’s higher in Russia?  (Australia: 2.52 per 1000 people; Russia the third-highest in the world, at 3.36 per thousand people.  Source) But how can that possibly be?  I’m sure it’s nothing to do with the fact that they get married when they’re still children.  Here’s a hilarious set of theories I found when googling divorce rates:

“Russians marry young. Men because they want to move out of the family home but need a 2nd mother to do the cooking, cleaning and washing. Women because they think they are in love or because the want someone to take care of them. Young Russian girls have no money.
Why do they divorce? Men divorce because they found a better woman. (They never give up their 2nd mother if they don’t have a 3rd waiting.) Women because they realize that they don’t love the man and in the divorce, they will get a pile of financial compensation. (Apartment, car, money) Women might stay with a man if she has a bad job or kids because no Russian man wants a women [sic] with kids. A single mother is a bad thing in Russia.” (Source; emphasis removed)

The thing is, a lot of this is terrifyingly true.  It more-or-less matches what my Russian friends, teachers and students have told me.  A lot of young girls are, as I’ve said before, like sharks, and have the sole purpose of biting a rich man.  People in places other than St Petersburg and Moscow get married a lot younger, and I’ve been told that if you’re 18, 19 and don’t want to get married, then your choice is to leave. That’s it.  Leave, and go to one of the slightly-more-tolerant big cities.  And as for the part about ‘second mothers’?  Absolutely true, or at least that’s how it seems to me.  For all that Russian men are portrayed as tough and hard in Hollywood movies, I generally find them like incompetent, spineless children, with about as much emotional maturity.  (And there goes half my Russian readership..)  They’re coddled growing up, and have zero life skills when they hit mating age: more to the point, they’re still thoroughly on the apron-strings.  Mothers and grandmothers form an essential part of the economy here, in that they take care of the men and any children.  On the one hand, Russian women are perceived as the weaker sex, and their role is to look after the house and deal with matters of romance; on the other, they have to be strong enough to deal with a 30-year-old child that is supposed to be their partner.  Oh, no, wait: I got mixed up with the West.  Not their partner, their charge.

Does that mean that I therefore agree with all women’s behaviour here?  Well, have a look at this video and then ask me again:

This girl’s now famous, and described in Russian as a ‘Russian miracle’.  She was all over the Russian news and internet.  How refreshing to see someone who seems so intelligent and well-cultured being idolised!  (Oh, wait.)  I think my favourite part is at the end, when she realises she’s on the big-screen at the game, and starts pouting.  Before that she was probably trying to attract the attention of the men around her; as I’ve said before, going to a sports club or a game is a legitimate way to try and meet men here.

I should probably mention what I think feminism is, as it’s clearly not just about marriage and family.  To me, it’s the idea that men and women equally have the opportunity to be what and who they want to be.  That’s it.  I don’t think that’s something that will destroy civilisations (and if it does, then those civilisations could probably use some redressing), but hey, I’m not in the Orthodox Church.  Of course, connected to this idea of opportunity is also the right to do that without being abused or suffering for it.  Do I think that feminism is perfectly implemented in the West?  Absolutely not, but I do think it’s a damn sight better there.

I remember when reading my uni textbooks about feminism and politics, a lot of which were written in the mid-90s, the Soviet Union was occasionally praised.  As in Australia following WW1, women gained a lot more rights and privileges as they’d had to step up while the men were absent, and didn’t settle back to their traditional roles very easily.  Likewise, in WW2 in the SU, Russian women not only stepped up at home, but acted as pilots, reconnaissance agents and snipers (source).  There are still intelligent, independent women here, but the Orthodox Church in collusion with its buddy the government want to make a stop to that.  Apparently, for the sake of survival.

A couple more articles on Russia Behind the News: