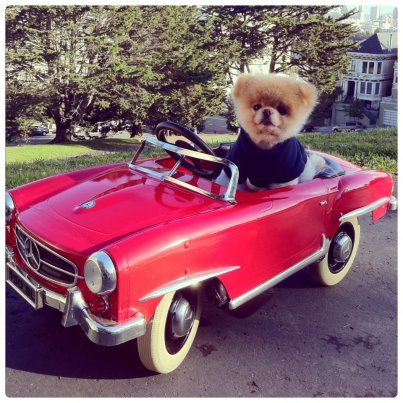 I’m pretty sure that “I have a car, I’ll show you the city” may be what passes for a pick-up line here.  Anyway, I’ll get to that.

Today I lured Jess out to Zelenogorsk, north of Piter, to go cross-country skiing.  Of course, the ‘skiing’ part failed—despite being assured that we could hire skis there, we absolutely couldn’t figure out where!  Instead we went meandering through some very tumble-down buildings:

We saw some rather unexpected stuff lying in the middle of nowhere:

We then headed back to near the train station, to get some lunch.  Whereupon I had the following conversation in Russian with our ridiculously friendly waiter:
Him: ывоалдфывозщкшфгоцулафоывлд
Me: What?!
Him: You converse in Russian really well.
Me: That’s not true—I just now couldn’t understand you!
Him: Only because I spoke so quickly.
Anyway, the guy got friendlier and friendlier, until finally he came and told me that rather than give us what we had ordered, they were going to double everything instead: he said that that’s just ‘Russian hospitality’.  It quickly turned from a snack into a 4-course meal!

Russians are apparently renowned to be hospitable—at least that’s what my students tell me.  It’s true that this guy/restaurant was really generous, and a girl I worked with shouted me dinner the first time I’d ever even met her, but other than that I haven’t really noticed it.  Hmm actually, I guess Nastya invited me to her family’s house in Siberia for a month over winter as well (and no, it wasn’t intended as punishment!!).  So maybe they have a point.  My friend J said on Saturday actually, that Russians are near-terrifying until you ask them for help, and then they’ll do everything in their power to lend a hand.

After an epic effort, we finished the meal, then the waiter came over and asked where we were from.  We got the standard response to ‘Australia’—”surfing”?!?  (It’s always either ‘surfing’ or ‘kangaroo’), then he asked for my number.  He followed up with saying that he has a car and will show us the city.  Haha Jess couldn’t understand any of this of course, so looked thoroughly confused at the fact I was giving a guy my number—something that never happens.  So yes, 10pm Thursday, we’re going for a drive!  Yay.

I’ll leave you with another pic or two of Zelenogorsk: it really was a beautiful fake-Spring day.